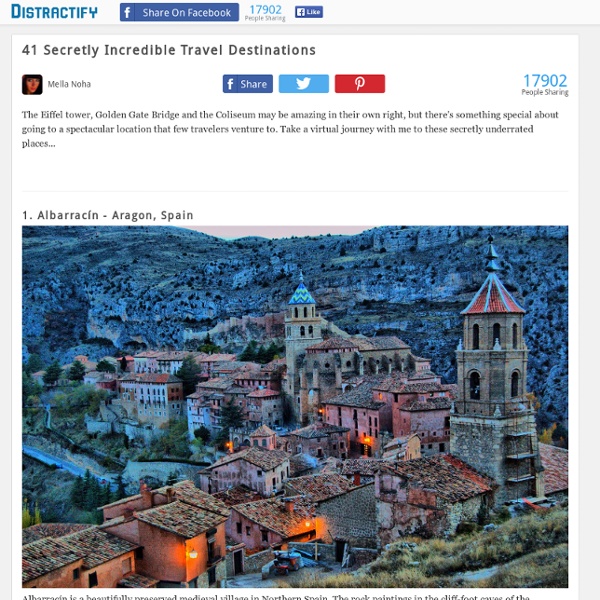 The Eiffel tower, Golden Gate Bridge and the Coliseum may be amazing in their own right, but there's something special about going to a spectacular location that few travelers venture to. Take a virtual journey with me to these secretly underrated places... Albarracín is a beautifully preserved medieval village in Northern Spain. The rock paintings in the cliff-foot caves of the Albarracin Cultural Park (some of the most important evidences of the Levantine prehistoric art of Spain) and the "Picaportes" (door knobs) are something to marvel at! Take a trip to the hanging Gardens of Marqueyssac overlooking the Dordogne and La Roque Gageac. From July to the end of August the gardens are open every Thursday evening and lit by candlelight. The Swallow's nest is a decorative castle located between Yalta and Alupka, built on top of the 130 foot high Aurora Cliff. Bishop Castle is undoubtedly one of the craziest castles in the world, created by the one-man castle builder Jim Bishop.

Amazing Places To Experience Around the Globe (Part 3) Devetashkata Cave - Bulgaria Ben Bulben at County Sligo, Ireland Shark Island - Sydney The 33 most beautiful abandoned places in the World 1. Christ of the Abyss, San Fruttuoso, Italy Via: en.www.lensart.ru 5 Great Sites for Exploring Cities Around the Globe When Google launched its panoramic photomapping service back in 2007, it was the first time many netizens had the chance to explore a swathe of detailed street-level photos from their armchairs. In the U.S., Street View's rivals now include Microsoft's Silverlight-powered "Streetside" via Bing Maps and MapQuest's 360 View. Elsewhere in the world, other international sites offer rival photomapping for their particular part of the globe, even as the reach of Google's Street View steadily increases. We've picked our five favorite websites from around the world that offer extensive street level imagery from places as varied as Munich, Mae Hong Son, Moscow and Miskolc. So grab your Panama hats and get ready to hit the virtual sidewalks of streets many, many miles away, then let us know your favorite services in the comments below. City8

Amazing Festivals Around The World That You Should See Before You Die Tweet Once a year some of the countries around the world hold magical and outrageous festivals. Some like the Brazilian carnival and Spanish bull chase are famous world wide while others few people know about. So if you fancy living it up then check out our list of 20 of the most amazing festivals from around the world that we recommend you should see before you die. 1. Panoramic pictures and virtual tour of World - 360 Cities Welcome to Earth! It's a planet having an iron core, with two-thirds of its surface covered by water. Earth orbits a local star called the Sun, the light of which generates the food supply for all the millions of species of life on earth.

39 of the world’s most inspiring routes for road trips [PICs] Whether it’s Utah or Iceland, something about a seemingly endless and open road makes me want to travel. Amazing Collection of Beautiful Places and Spaces Our planet is far more impressive than we could imagine. It has the power to build landscapes that amaze us even after seeing them a few times. In this article I have gathered pictures of places and spaces in our beautiful world that are simply amazing and must be seen. Enjoy. 1. Green Fly Geyser, Nevada

Too beautiful to be real? 16 surreal landscapes found on Earth These bizarre locations may seem like a series of elaborate movie sets, but they are real destinations that you might want to see for yourself. Photo: Greg Mote/Flickr The Wave, Arizona, U.S. Photo: Shutterstock Travertines, Pamukkale, Turkey Photo: Shutterstock The ultimate sailing trips Pack your sea legs for island adventures aplenty in this whistlestop tour of the world's best sailing spots, taken from Lonely Planet's 1000 Ultimate Experiences. 1. British Virgin Islands What happens when steady trade winds meet an island-flecked channel with tame currents and hundreds of protected bays?