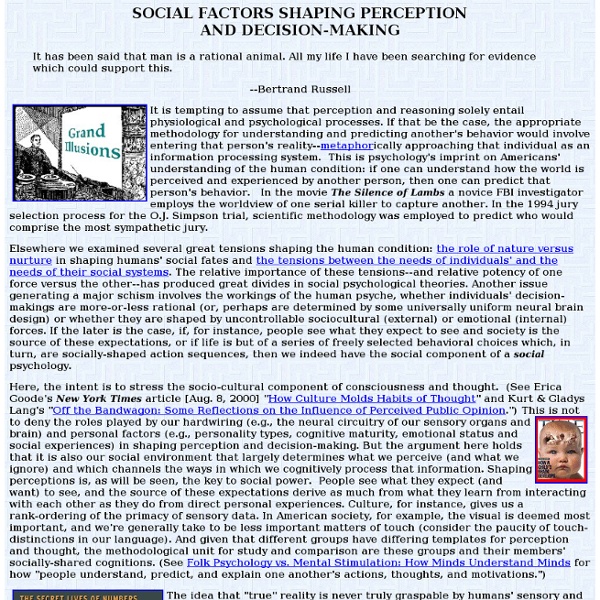 Elsewhere we examined several great tensions shaping the human condition: the role of nature versus nurture in shaping humans' social fates and the tensions between the needs of individuals' and the needs of their social systems. The relative importance of these tensions--and relative potency of one force versus the other--has produced great divides in social psychological theories. Another issue generating a major schism involves the workings of the human psyche, whether individuals' decision-makings are more-or-less rational (or, perhaps are determined by some universally uniform neural brain design) or whether they are shaped by uncontrollable sociocultural (external) or emotional (internal) forces. Here, the intent is to stress the socio-cultural component of consciousness and thought. The idea that "true" reality is never truly graspable by humans' sensory and cognitive equipment goes back at least to the works of Plato. Consider the social construction of sensory distinctions. Related:  Antropologia, etnologia, sociologia

Drawings vs LSD, It’s Like a Graph but Better! | EPICr These drawings were done as part of a CIA experiment aimed at determining the effects of LSD on the human body. The drawings are incredibly fascinating, particularly due to the progression of style that occurs throughout the experiment. They administered 100ul of LSD to the artist and gave the artist free access to an activity box full of crayons. His subject was the medical assistant who administered the LSD. 1. Minute: 0 – Yep this is the control 2. 3. 4. 5. 6. 7. 8. 9. Fin. I particularly enjoy how from minutes 150 – 155 his drawings become far worse, then all of a sudden he is amazing. What are your thoughts?

10 Psychological Experiments That Went Horribly Wrong Psychology as we know it is a relatively young science, but since its inception it has helped us to gain a greater understanding of ourselves and our interactions with the world. Many psychological experiments have been valid and ethical, allowing researchers to make new treatments and therapies available, and giving other insights into our motivations and actions. Sadly, others have ended up backfiring horribly — ruining lives and shaming the profession. Here are ten psychological experiments that spiraled out of control. 10. Prisoners and guards In 1971, social psychologist Philip Zimbardo set out to interrogate the ways in which people conform to social roles, using a group of male college students to take part in a two-week-long experiment in which they would live as prisoners and guards in a mock prison. 9. Wendell Johnson, of the University of Iowa, who was behind the study Theodore Kaczynski, the Unabomber, also seen top 7. 6. The Milgram Experiment underway 5. 4. 3. 2. 1.

Baptiste Coulmont 20+ awesome travel jobs and how to get them 1. Freelance writer / photographer This may mean travel writer, but it doesn’t have to. Let’s say you were a banker; why not start submitting articles to finance mags and journals? The point is to become location independent, and you don’t have to write about travel to do so. If you do want to write about travel for a living, check out MatadorU, Matador’s online travel writing, photography, and filmmaking school. 2. These gigs easier to find in some countries than others, and requirements vary from a bachelor’s degree in any field to a master’s in education plus TESL certification. South and Central American countries want ESL teachers, but getting the visa is a bit tougher than it is in Asia. Recruiting companies such as Footprints can be extremely helpful if you’re looking for an ESL gig; another option is to hunt them down on forums like Dave’s ESL Cafe. 3. Who qualifies to be a travel nurse? 4. 5. 6. Doesn’t matter how the economy’s doing; the military is always hiring. 7. 8. 9. 10.

The Creative Personality: Ten paradoxical traits of the The Creative Personality: Ten paradoxical traits of the creative personality By Mihaly Csikszentmihalyi Of all human activities, creativity comes closest to providing the fulfillment we all hope to get in our lives. Creativity is a central source of meaning in our lives. What makes us different from apes--our language, values, artistic expression, scientific understanding, and technology--is the result of individual ingenuity that was recognized, rewarded, and transmitted through learning. When we're creative, we feel we are living more fully than during the rest of life. Perhaps only sex, sports, music, and religious ecstasy--even when these experiences remain fleeting and leave no trace--provide a profound sense of being part of an entity greater than ourselves. But creativity also leaves an outcome that adds to the richness and complexity of the future. If I had to express in one word what makes their personalities different from others, it's complexity. 1. 2. 3. 4. And they are right.

The Basic Laws of Human Stupidity by Carlo M. Cipolla, Professor of Economics, UC Berkeley in Whole Earth Review, Spring 1987 The First Basic Law of Human Stupidity asserts without ambiguity that Always and inevitably everyone underestimates the number of stupid individuals in circulation... As you consider Dr. ________________________________________ From: Adrian Giga [adrian.giga@humanitas.ro] Sent: Tuesday, October 29, 2013 3:13 AM To: Webmaster Subject: ECOMAIL Ecotopia Website - copyright infringement Dear webmaster, Please note that at the following URL: is posted a material that we seriously suspect it has not the permission of the exclusive rights of the owner (

It Happened to Me: My Boyfriend Died He drank Mountain Dew Code Red. His favorite piece of clothing was a Dallas Cowboys T-shirt, because he was born in Texas. He used American Crew hair gel. He drove a red convertible. He died on his 26th birthday. These are the pieces of a life, and a love, you won’t find in an obituary. At 22, I was a nervous, anxious wreck. And so it came to pass that in March 1999, I met a very beautiful boy with black hair and blue eyes underneath the Macy’s men’s store sign on the corner of 34th Street and Seventh Avenue. He called the next day. Greg refused to take life too seriously. A few months after we began dating, I found out he was sick. That’s a lot to process, I said. You can break up with me, he said. It was a deal. A few weeks later, I couldn’t reach him on the phone. And things were better. Soon, however, we found out his body was rejecting the transplant. I got a call at work on February 25, 2002, that I needed to get uptown to the hospital as quickly as I could.

The Lesson of the Monkeys | Jason Wells I was first told of this experiment* by a former work colleague, and later discovered this illustration of it. It’s both illuminating and disturbing. There is a clunky word that describes this phenomenon: filiopietism, or the reverence of forebears or tradition carried to excess. But I prefer another term for it: the tragic circle. I believe many of these tragic circles exist, mostly unseen, in across all cultures and societites, causing untold harm. When discovered, they should be terminated. The lesson is as obvious as it is important: question everything. * Stephenson, G.

How Police Interrogation Works" There are "Law & Order" addicts everywhere who think they could get a perp to confess. A little glaring, some getting in the guy's face, a revelation that his fingerprints are all over the murder weapon and voilà! He's recounting his crime. Getting someone to confess to a crime is not a simple task, and the fact that detectives sometimes end up with confessions from the innocent testifies to their expertise in psychological manipulation. Police interrogations weren't always so complex. While the Supreme Court had ruled as early as 1897 against involuntary confessions, it was in 1937 that things really started to change. When the case Miranda v. In looking for a replacement for illegal forms of coercion, police turned to fairly basic psychological techniques like the time-honored "good cop bad cop" routine, in which one detective browbeats the suspect and the other pretends to be looking out for him.

The Baader-Meinhof Phenomenon You may have heard about Baader-Meinhof Phenomenon before. In fact, you probably learned about it for the first time very recently. If not, then you just might hear about it again very soon. Baader-Meinhof is the phenomenon where one happens upon some obscure piece of information—often an unfamiliar word or name—and soon afterwards encounters the same subject again, often repeatedly. Anytime the phrase “That’s so weird, I just heard about that the other day” would be appropriate, the utterer is hip-deep in Baader-Meinhof. Most people seem to have experienced the phenomenon at least a few times in their lives, and many people encounter it with such regularity that they anticipate it upon the introduction of new information. The phenomenon bears some similarity to synchronicity, which is the experience of having a highly meaningful coincidence, such as having someone telephone you while you are thinking about them. The reason for this is our brains’ prejudice towards patterns.