Let the Robot Drive: The Autonomous Car of the Future Is Here 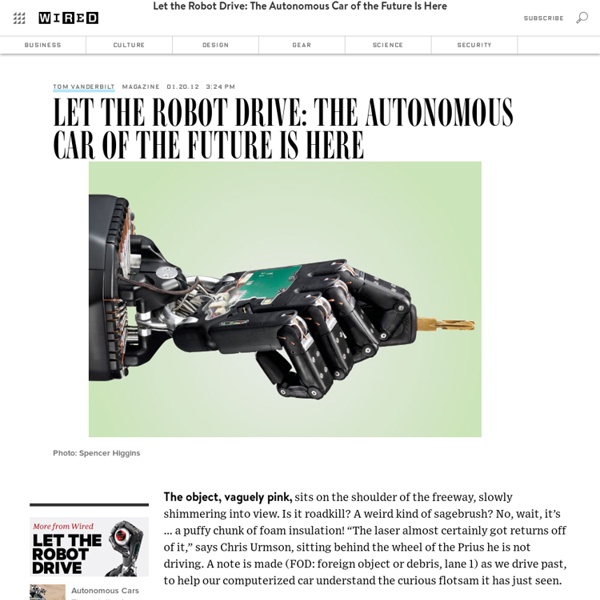 The object, vaguely pink, sits on the shoulder of the freeway, slowly shimmering into view. Is it roadkill? A weird kind of sagebrush? No, wait, it’s … a puffy chunk of foam insulation! “The laser almost certainly got returns off of it,” says Chris Urmson, sitting behind the wheel of the Prius he is not driving. A note is made (FOD: foreign object or debris, lane 1) as we drive past, to help our computerized car understand the curious flotsam it has just seen. It’s a Monday, midday, and we are heading north on California Highway 85 in a Google autonomous vehicle. Anthony Levandowski, business lead on Google’s self-driving-car project, sits in the passenger seat, lanky and spectacled, wearing loud athletic shoes and clutching a MacBook Pro with a bumper sticker that reads “My other car drives itself.” The Prius begins to seem like the Platonic ideal of a driver. Google isn’t the only company with driverless cars on the road. Loaded: 0% Progress: 0% The Autonomous Car of the Future Is Here

Let the Robot Drive: The Autonomous Car of the Future Is Here : Futurology Cost of gene sequencing falls, raising hopes for medical advances (Credit: Silky M/Wikimedia Commons) In Silicon Valley, the line between computing and biology has begun to blur in a way that could have enormous consequences for human longevity. Bill Banyai, an optical physicist at Complete Genomics, has helped make that happen. His digital expertise was essential in designing a factory that automated and greatly lowered the cost of mapping the three billion base pairs that form the human genome. The promise is that low-cost gene sequencing will lead to a new era of personalized medicine, yielding new approaches for treating cancers and other serious diseases. Now that is changing: exponential increases in processing power and transistor density are accompanied by costs that fall at an accelerating rate. “For all of human history, humans have not had the readout of the software that makes them alive,” said Larry Smarr, director of the California Institute of Telecommunications and Information Technology.

Autonomous Cars If you’ve ever been broken down in the desert late at night without the luxury of supplemental lighting, you know that it doesn’t get any darker. You could even say night time in the desert is something that nightmares are made of. But, if you’re a self-driving Fusion Hybrid with autonomous capabilities, that darkness doesn’t matter. See, instead of relying on cameras to detect the car’s position, Ford’ s Fusion Hybrid autonomous research vehicles use the combination of high-resolution 3D maps, LiDAR, and radar to determine exactly where it is at. Jim McBride, Ford’s technical leader for autonomous vehicles, said, “Thanks to LiDAR, the test cars aren’t reliant on the sun shining, nor cameras detecting painted white lines on the asphalt. This most recent nighttime testing session took place at the Ford Arizona Proving Ground with Ford engineers strapped in for the ride. Continue reading for the full story.

So. Much. Win. : videos The magnetic soap that could clean up oil spills Environment posted on January 26, 2012, at 7:30 AM A magnet pulls metallic soap out of water. Is this the key to quicker cleanup after oil spills? British researchers have found a way to imbue soap with magnetic properties, which could have huge implications in the way we fight ecosystem-damaging oil spills. It does. It's simple: A detergent that you can move with magnets would be much easier to gather up and remove from the water. Scientists from the University of Bristol added iron-rich salts to create "metallic centers within the soap particles," says Ted Thornhill at Britain's . Yep.

Autonomous car An autonomous car,[1] also known as a driverless car,[2] self-driving car[3] or robot car,[4] is an autonomous vehicle capable of fulfilling the human transportation capabilities of a traditional car. As an autonomous vehicle, it is capable of sensing its environment and navigating without human input. Robotic cars exist mainly as prototypes and demonstration systems. Currently, the only self-driving vehicles that are commercially available are open-air shuttles for pedestrian zones that operate at 12.5 miles per hour (20.1 km/h). Autonomous vehicles sense their surroundings with such techniques as radar, lidar, GPS, and computer vision. Some quasi-autonomous demonstration systems date back to the 1920s and the 1930s.[7] Since the 1980s, when Mercedes-Benz and Bundeswehr University Munich built a driverless car through the EUREKA Prometheus Project,[8] significant advances have been made in both technology and legislation relevant to autonomous cars. Definition[edit] History[edit]

This Is What Happens When You Try And Teach Huckleberry Finn As It Was Written : books World Economic Forum lists top 10 emerging technologies for 2012 The World Economic Forum's Global Agenda Council on Emerging Technologies has drawn up a list of the top 10 emerging technologies for 2012 (Image: Shutterstock) Our goal here at Gizmag is to cover innovation and emerging technologies in all fields of human endeavor, and while almost all of the ideas that grace our pages have the potential to enhance some of our lives in one way or another, at the core are those technologies that will have profound implications for everyone on the planet. For those looking to shape political, business, and academic agendas, predicting how and when these types of technologies will effect us all is critical. Betting on the right technologies can allow schools to produce graduates better qualified to deal with a rapidly changing world, governments to more efficiently meet the needs of the populace, business to generate profits, and scientists to better allocate resources. 1. Source: World Economic Forum Blog About the Author Post a CommentRelated Articles

The Ethics of Autonomous Cars If a small tree branch pokes out onto a highway and there’s no incoming traffic, we’d simply drift a little into the opposite lane and drive around it. But an automated car might come to a full stop, as it dutifully observes traffic laws that prohibit crossing a double-yellow line. This unexpected move would avoid bumping the object in front, but then cause a crash with the human drivers behind it. Should we trust robotic cars to share our road, just because they are programmed to obey the law and avoid crashes? Our laws are ill-equipped to deal with the rise of these vehicles (sometimes called “automated”, “self-driving”, “driverless”, and “robot” cars—I will use these interchangeably). But there are important differences between humans and machines that could warrant a stricter test. Moreover, as we all know, ethics and law often diverge, and good judgment could compel us to act illegally. For the time being, the legal and regulatory framework for these vehicles is slight. 1. 2. 3.

Niihau Incident The Niʻihau Incident (or Battle of Niʻihau) occurred on December 7, 1941, when Imperial Japanese Navy Air Service pilot Shigenori Nishikaichi crash-landed his Zero on the Hawaiian island of Niʻihau after participating in the attack on Pearl Harbor. He was killed in a struggle with people on the island. The island's Native Hawaiian residents were initially unaware of the attack, but apprehended Nishikaichi when the gravity of the situation became apparent. Nishikaichi then sought and received the assistance of three locals of Japanese descent in overcoming his captors, finding weapons, and taking several hostages. In the end Nishikaichi was killed by the wife of Niihauan Benehakaka "Ben" Kanahele,[1] who was wounded in the process, and one of Nishikaichi's confederates, Yoshio Harada, committed suicide. Background[edit] Niʻihau, the westernmost and second smallest of the primary Hawaiian Islands, has been privately owned by the Robinsons, a white kamaʻaina family, since 1864. Endgame[edit]

Gecko-inspired adhesive can hold 300kg A Darpa-funded team at the University of Massachusetts Amherst has invented "Geckskin" -- a gecko-inspired adhesive that can safely hold 300kg on a flat surface, or stick a 42-inch plasma television to a wall. Geckos have amazed biologists for years, because their feet can produce an adhesive force that's roughly equivalent to four kilograms, despite the lizard only weighing about 140 grams. The animal doesn't slip and is equally at home on vertical, slanted, even backward-tilting surfaces. "Amazingly, gecko feet can be applied and disengaged with ease, and with no sticky residue remaining on the surface," says biologist Duncan Irschick. He's a functional morphologist who has studied the gecko's clinging abilities for over 20 years, and lent his expertise to the project. Plenty of researchers -- including material scientists and roboticists -- have tried to copy the gecko's foot. Every square millimeter of a gecko's footpad contains about 14,000 hair-like setae which grip onto surfaces.

How Uber’s Autonomous Cars Will Destroy 10 Million Jobs And Reshape The Economy by 2025 Commentary By Zack Kanter @zackkanter, Entrepreneur and Futurist I have spent quite a bit of time lately thinking about autonomous cars, and I wanted to summarize my current thoughts and predictions. Most people – experts included – seem to think that the transition to driverless vehicles will come slowly over the coming few decades, and that large hurdles exist for widespread adoption. I believe that this is significant underestimation. ALSO READ: 84 Mile Per Gallon Car For Under $7 Grand Is Missing Just One Thing They will cause unprecedented job loss and a fundamental restructuring of our economy, solve large portions of our environmental problems, prevent tens of thousands of deaths per year, save millions of hours with increased productivity, and create entire new industries that we cannot even imagine from our current vantage point. The transition is already beginning to happen. More:PureWow’s Guide To Inspiration Highway UPDATE: Uber Hires Carnegie Melon Robotic Team To Develop Cars

TIL that one Hawaiian island is privately owned, inhabited almost entirely by natives who live off the land, and largely off limits to outsiders. : todayilearned Nanomaterial dust is more explosion-prone that normal dust In 2008, a sugar refinery in Portwentworth, Georgia exploded, killing 13 people and injuring 42 others. The culprit was a dust explosion. That's the violent combustion of extremely fine particles when they're suspended in an enclosed location's air. These sorts of explosions have been recorded since 1785, so we now know quite a bit about the combustible properties of dust. Researchers from Dalhousie University in Halifax, in an study for the American Chemical Society's journal Industrial & Engineering Chemistry Research, probed these smaller "nontraditional" dusts to see how they compare to old fashioned wheat and sugar. They found that the energy needed to ignite nanomaterials made of metals, such as aluminium, is less than 1 mJ -- that's less than 1/30th the amount of energy you'd need to make sugar dust explode, or less than 1/60th of the energy required to set wheat dust aflame.