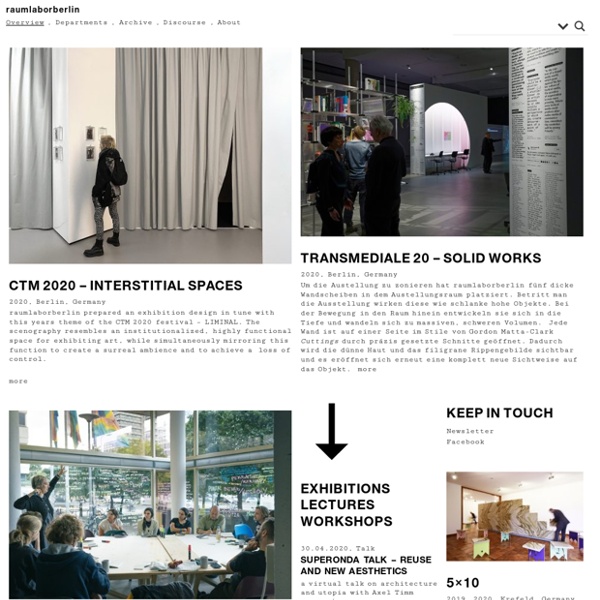 MANIFESTO Be utopian ! We want to build new worlds where fiction is reality and games are new rules for democracy. If space is made by dynamics of exchange, then everybody can be the architects of our world and encourage creativity, reflexion and to renew social behaviours. ZUS Zones Urbaines Sensibles We are building a bridge and we need your help! In the context of the 5th IABR, ZUS has launched an initiative for crowd funded citymaking. I Make Rotterdam is a new way of creating urban qualities in a post-crisis economy. Through web- and digital applications citizens will be given full opportunity of private development: small-scale, non-bureaucratic, low-budget. I Make Rotterdam will be developed in the next years as a contemporary alternative for large-scale city planning, since traditional developing strategies have proven to fail in the current market economy. As a first step in this long term process, the Luchtsingel will be realized in april 2012.

rotor Featured projects A Critical Look at Sustainable Architecture through 600 Objects The book Behind the Green Door is a richly illustrated critical portrait of the concrete consequences and paradoxes of sustainability as a dominating paradigm within architecture and urban planning(...) > more... Architecture and the Desire for Sustainability / Oslo Architecture Triennale 2013 Projects Design Miami: Flotsam & Jetsam Thakoon 9 DeKalb Avenue manifesto of the copyist party : Nick Axel manifesto of the copyist party 2012 axel + hernández // A spectre is haunting Architecture - the spectre of Copyism Where is the architect that has not been decried as Copyist by its opponents in profession? Where is the opposition that has not hurled back the branding reproach of Copyist, against the most advanced representative professionals in Architecture, as well as its reactionary adversaries? Two things result from this fact. I.

How Spain’s ‘guerrilla architect’ is building new hope out of financial crisis In June 2014, Santiago Cirugeda and Jorge “Bifu” Barroso announced the closure of La Carpa (the big top) in downtown Seville. It had been four years since the radical architect and theatre director had teamed up to assemble the city’s first self-built independent arts space by occupying a disused piece of public land. And so the structures that made up La Carpa – by now, a popular fixture in the city, with its own circus group – were dutifully taken down: two second-hand circus tents, a two-storey building made from shipping containers, a skate ramp, and the iconic araña – another container, this one mounted on four, half-bent metal legs like a post-nuclear spider (certainly not your average office space). La Carpa was never really intended to be permanent, yet its creation required extraordinary self-sacrifice. Barroso, director of the Varuma theatre group, spent a year living onsite (in the araña) to secure their claim to the land: “It was pretty tough,” he recalls.

How to Foster Civic Engagement in the Age of Twitter Too often community engagement can be seen as an afterthought, carried out in a dull and unengaging way. But does it always have to be this way? In this article from ArchitectureBoston’s Spring 2016 Issue, originally titled “Bring on the joy: Civic engagement strategies in the age of Twitter,” Russell Preston makes a case for more dynamic public engagement, citing several examples where “engagement is actually the process” rather than just a “required step to a planning process. In New England, changing zoning is more difficult than sending someone to the moon. In the spring of 2015, Dan Bacon, planning director for Scarborough, Maine, asked for help implementing a better zoning code for Higgins Beach, a picturesque community of largely seasonal residents.

The Cineroleum The Cineroleum was a self-initiated project that transformed a derelict petrol station on Clerkenwell Road into a hand-built cinema. It aimed to demonstrate the wider potential for re-using the 4,000 empty petrol stations in the UK as new spaces for public use. Enclosed by an ornate curtain strung from the forecourt roof, The Cineroleum was an improvisation of the decadent interiors that greeted audiences during cinema’s golden age. Classic elements of cinematic iconography were re-imagined for their new roadside setting with cheap, reclaimed or donated materials. Flip-up seats were remade from scaffolding boards, the curtain out of roofing material.

Videos - Impact Design Hub Our favorite videos on people, projects, events, and webinars on impact design. Profiles TED Talks Organizations Webinars Films Bustler: Architecture Competitions, Events & News The historic Targ Węglowy Square in Gdańsk, Poland was merely an empty lot before the Gdyby Group (whose name translates to "What if?") in collaboration with City Culture Institute proposed a new public space to revive it. Back in early September, the group installed the numerous cubic box furnishings throughout the lot, where visitors of any age can play, socialize, and relax. Gdyby then gathered public feedback on the project and held an open public discussion about the Square's future.