20 JavaScript Frameworks Worth Checking Out 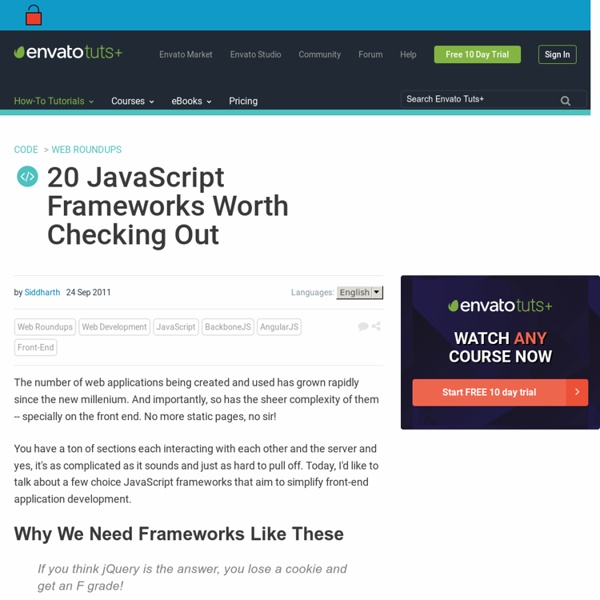 The number of web applications being created and used has grown rapidly since the new millenium. And importantly, so has the sheer complexity of them -- specially on the front end. No more static pages, no sir! You have a ton of sections each interacting with each other and the server and yes, it's as complicated as it sounds and just as hard to pull off. Today, I'd like to talk about a few choice JavaScript frameworks that aim to simplify front-end application development. If you think jQuery is the answer, you lose a cookie and get an F grade! Creating responsive, fluid, and maintainable interfaces for web apps isn't as easy as one would imagine -- there is data to be sent back to the server and the results parsed, data stores to be updated, views to be re-rendered and so much else that needs to be done in the background. Sure, a few of these may be a little old but their code bases have lots of lessons to teach. Related links: Introduction to Sammy.js Github Repo Google Code Related:  Javascript

Treesaver.js QuoJS - Micro JavaScript Library 30+ New Resources, Tools & Apps For Kick-Ass Web Developers If you are looking for a tool that will check your Javascript or validate your freshly made CSS, or give you an creative advantage with the newest jquery plugins, or do you need the help to create an image sprite, or a new HTML5 Canvas library, or even learning a new CSS framework. Well today’s post is just for you as we look into what the newest tools, resources and apps that been released in the web development industry. Javascript & jQuery Plugins TimelineJS TimelineJS can pull in media from different sources. It has built in support for:Twitter, Flickr, Google Maps, YouTube, Vimeo, Dailymotion, Wikipedia, SoundCloud and more media types in the future. CanJS CanJS is an MIT-licensed, client-side, JavaScript framework that makes building rich web applications easy. Fixie.js Fixie.js is an open source tool that automatically adds filler content to HTML documents. foresight.js heatmap.js sigma.js jPages keymaster.js *Beta leaflet Typed JS Underscore JS Morris.JS Dynamo EpicEditor URI.js Retina JS Coda 2

ahe/choco - GitHub Rich JavaScript Applications – the Seven Frameworks (Throne of JS, 2012) It’s no longer good enough to build web apps around full page loads and then “progressively enhance” them to behave more dynamically. Building apps which are fast, responsive and modern require you to completely rethink your approach. The premise was to take the seven top JavaScript frameworks/libraries for single-page and rich JavaScript applications — AngularJS, Backbone, Batman, CanJS, Ember, Meteor, Knockout, Spine — get the creators of all of them in one location, and compare the technologies head to head Disclaimer: I was there to represent Knockout, so obviously I’m not neutral. * Yes, I know that’s eight frameworks, not seven. TL;DR Executive Summary For many web developers, it’s now taken for granted that such client-side frameworks are the way to build rich web apps. Technologies: Agreement and Disagreement As each SPA technology was presented, some fairly clear patterns of similarity and difference emerged. Agreement: Progressive enhancement isn’t for building real apps. Backbone

HTML5 Cross Browser Polyfills · Modernizr/Modernizr Wiki The No-Nonsense Guide to HTML5 Fallbacks So here we're collecting all the shims, fallbacks, and polyfills in order to implant HTML5 functionality in browsers that don't natively support them. The general idea is that: We, as developers, should be able to develop with the HTML5 APIs, and scripts can create the methods and objects that should exist. Developing in this future-proof way means as users upgrade, your code doesn't have to change but users will move to the better, native experience cleanly. Looking to conditionally load these scripts (client-side), based on feature detects? svgweb by Brad Neuberg & others Fallback via FlashSnap.SVG from scratch by the author of Raphaël (Dmitry Baranovskiy) Abstracted API. FakeSmile by David Leunen Canvas Web Storage (LocalStorage and SessionStorage) Non HTML5 API Solutions ssw by Matthias Schäfer$.store by Rodney Rehmlawnchair by Brian Lerouxstore.js by Marcus WestinPersistJS by Paul DuncanSquirrel.js by Aaron GustafsonjStorage by Andris Reinman Video

paulca/eyeballs.js - GitHub EaselJS | A Javascript library that makes working with the HTML5 Canvas element easy. Recent Updates Follow @CreateJS November 2014 Updates in preparation for next release (coming soon).New class model, with big performance increases October 2014 Lots of bug fixes and pull requests.New 'Extras' folder in GitHub with useful tools and classes July 2014 Major overhaul of Graphics to include a useful command pattern, and a big performance increase.Added Graphics.store() / unstore() The Story Why we built EaselJS About EaselJS EaselJS provides straight forward solutions for working with rich graphics and interactivity with HTML5 Canvas. Featured Projects Community Show & Tell. Ion Drift A port of the Flash game Ion Drift, b10b was able to build a CreateJS version in less than a day that hit target framerates on even the lowest devices, and outperformed ports to other libraries. By b10b b10b