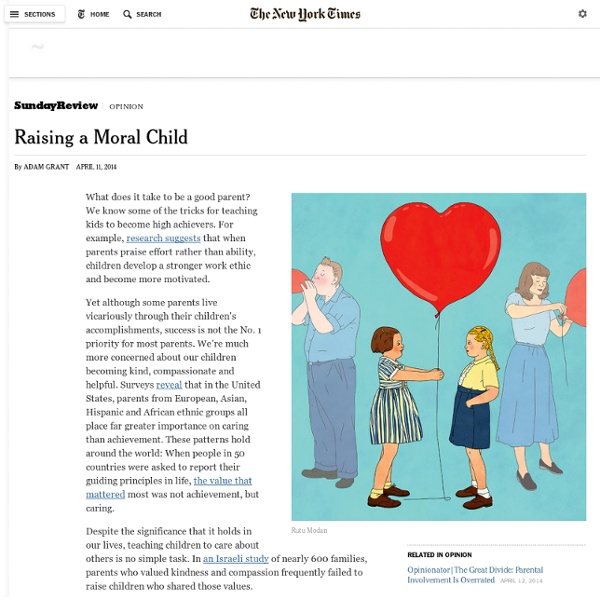 Photo What does it take to be a good parent? We know some of the tricks for teaching kids to become high achievers. For example, research suggests that when parents praise effort rather than ability, children develop a stronger work ethic and become more motivated. Yet although some parents live vicariously through their children’s accomplishments, success is not the No. 1 priority for most parents. We’re much more concerned about our children becoming kind, compassionate and helpful. Despite the significance that it holds in our lives, teaching children to care about others is no simple task. Are some children simply good-natured — or not? Genetic twin studies suggest that anywhere from a quarter to more than half of our propensity to be giving and caring is inherited. By age 2, children experience some moral emotions — feelings triggered by right and wrong. But is that the right approach? The researchers randomly assigned the children to receive different types of praise. Related:  Raising Kids

Dan Pink: How Teachers Can Sell Love of Learning to Students By Jennie Rose In his new book To Sell is Human, author Daniel Pink reports that education is one of the fastest growing job categories in the country. And with this growth comes the opportunity to change the way educators envision their roles and their classrooms. Guided by findings in educational research and neuroscience, the emphasis on cognitive skills like computation and memorization is evolving to include less tangible, non-cognitive skills, like collaboration and improvisation. Jobs in education, Pink said in a recent interview, are all about moving other people, changing their behavior, like getting kids to pay attention in class; getting teens to understand they need to look at their future and to therefore study harder. “We have a lot of learned behavior of compliance, and hunger for external rewards and no real engagement.” Whether a teacher is presenting to her board or pitching a crowd of 12-year-olds on why Shakespeare was a genius, it’s all the art of persuasion. Related

The Confidence Gap For years, we women have kept our heads down and played by the rules. We’ve been certain that with enough hard work, our natural talents would be recognized and rewarded. We’ve made undeniable progress. In the United States, women now earn more college and graduate degrees than men do. And yet, as we’ve worked, ever diligent, the men around us have continued to get promoted faster and be paid more. Some observers say children change our priorities, and there is some truth in this claim. The elusive nature of confidence has intrigued us ever since we started work on our 2009 book, Womenomics, which looked at the many positive changes unfolding for women. We know the feeling firsthand. Claire found that implausible, laughable really, and yet she had a habit of telling people she was “just lucky”—in the right place at the right time—when asked how she became a CNN correspondent in Moscow while still in her 20s. And the men? Do men doubt themselves sometimes? That is a crucial point.

10 Common Mistakes Parents Today Make (Me Included) | Kari Kubiszyn Kampakis When I became a mom, I got lots of advice on how to love my child. But not until a few years ago did someone actually point out that loving a child means wanting what's best for them long-term. When my four daughters were young, long-term didn't resonate with me. Back then it was about survival, meeting daily needs and keeping my head above water. Now that my kids are maturing, however, the fog is lifting. I'm no longer a pledge of parenting, but rather an indoctrinated member. These days, I put more thought into long-term. A while back I came across some interesting articles and books that dig into what psychologists today are seeing: a rising number of 20-somethings who are depressed and don't know why. One reason given is that parents today are too quick to swoop in. One article mentions incoming college freshmen known to deans as "teacups" for their fragility in the face of minor problems. Here's psychiatrist Paul Bohn's response, as paraphrased in the piece: Like Us On Facebook |

The Brainstormer - The Brainstormer by Andrew Bosley The Brainstormer9/16/13: Brainstormer Facebook Page Read reviews of the app and see what others are doing with the Brainstormer! Visit, "like it", and pass it along! 9/16/13: More wheels! When I was in school at SJSU, studying visual development and illustration, I was always trying to give myself little concept projects to keep myself sharp and thinking. RSCON 2014 We hope you were inspired by the Reform Symposium Free Online Conference (RSCON) events that took place July 10-13th. The online global event featured 50+ presentations, 11 keynote speakers, 3 panel discussions, and a tech/app swapalooza. Our plenary, Dean Shareski, began the conference by challenging us to spread joy in our practice. Topics included mobile learning, gamification, differentiation, writing web tools, passion based learning, maker education, teaching english language learners, demand high teaching, Chess, puppets, Minecraft, digital portfolios, and much more! If you missed any of the sessions, find all the recordings here, On July 10th, we hosted our first pre-conference Author Spotlight. Here is important information: Thank you for supporting our presenters, keynotes, and plenary who dedicate time to inspiring you! Thank you for attending! Conference Organizers: Conference Overview Friday, July 11th Saturday, July 12th

Will Global Warming Produce More Tornadoes? In the wake of a devastating series of twister strikes, here's what the latest science has to say. —Chris Mooney on Mon. April 28, 2014 11:56 AM PDT An automobile dealer surveys the tornado damage to one of his trucks in Mayflower, Arkansas, on Sunday.Danny Johnston/AP Photo After a remarkably quiet start, the US tornado season exploded into action over the weekend, as a battery of tornadoes in Arkansas, Iowa, and Oklahoma killed 16 people. It all amounts to quite the burst of weather whiplash. Until pretty recently, scientists really felt that they couldn't say much about that question. Conditions favorable to tornadoes may increase with global warming, says one new study. In recent months, though, this consensus—that we really don't know what's happening with global warming and tornadoes—has been challenged by some interesting new research. The environments in which tornadoes form are changing, according to the latest research.

The Trouble With Bright Girls Successful women know only too well that in any male-dominated profession, we often find ourselves at a distinct disadvantage. We are routinely underestimated, underutilized, and even underpaid. Studies show that women need to perform at extraordinarily high levels, just to appear moderately competent compared to our male coworkers. But in my experience, smart and talented women rarely realize that one of the toughest hurdles they'll have to overcome to be successful lies within. Chances are good that if you are a successful professional today, you were a pretty bright fifth grade girl. She found that bright girls, when given something to learn that was particularly foreign or complex, were quick to give up--and the higher the girls' IQ, the more likely they were to throw in the towel. Why does this happen? How do girls and boys develop these different views? Boys, on the other hand, are a handful.

I ordered a Double Double, and I received an Experience | Pam Ross I was in a bad mood. My infant son was sick, I wasn’t feeling well, and I was trying to juggle the regular day-to-day activities (work and personal). I decided to go through the Tim Hortons drive-thru for some salvation…a double double, hot coffee hug. Little did I know, I was going to receive more than my usual customer service experience. I admit that I have certain expectations and compromises when I order through ANY drive-thru. My expectations are as follows: - Reasonably fresh food.- Beverages are hot or cold (as intended) not room temperature. - Customer service is fast, and acceptable.- The order that I receive is the order that I placed – at least 90% of the time. My compromises are as follows: - Sometimes you get the older fries that taste like cardboard. - Sometimes customer service is less than acceptable. - The server can’t hear me. - I can’t hear the server. - I may drive away with an order that was meant for the next car. I had an experience that day.

Study: Firstborn Children Dream Bigger, Achieve More - Julie Beck Oldest siblings aspire to higher levels of formal education—and they're more likely to stick with it. The stereotype of the oldest sibling is that of a Type-A overachiever, high-strung and highly successful. The effect of birth order on personality and achievement is something that seems like common knowledge, and there is research to suggest that firstborns have the advantage. But it’s less set in stone than it seems, partly because many studies compared siblings from many families. “Birth order is clearly a within-family phenomenon,” points out a study published by Feifei Bu of the University of Essex as part of the Institute for Social and Economic Research’s Working Paper Series. Her study takes data on 3,552 people organized into 1,503 clusters of siblings from the British Household Panel Survey (and its successor, the UK Household Longitudinal Study) and looks at how birth order relates to educational aspiration and achievement, both across and within families.

The Rules Making sense of race and privilege By Lawrence Otis Graham ’83 Published in the October 8, 2014, issue Michael Falco/Black Star Lawrence Otis Graham ’83 I knew the day would come, but I didn’t know how it would happen, where I would be, or how I would respond. It is the moment that every black parent fears: the day their child is called a nigger. My wife and I, both African-Americans, constitute one of those Type A couples with Ivy League undergraduate and graduate degrees, who, for many years, believed that if we worked hard and maintained great jobs, we could insulate our children from the blatant manifestations of bigotry that we experienced as children in the 1960s and ’70s. But it happened nevertheless in July, when I was 100 miles away. Family photo: Christine Butler The Graham family at home “Are you the only nigger at Mellon Academy*?” Certain that he had not heard them correctly, my son moved closer to the curb, and asked politely, “I’m sorry; I didn’t hear you ... ” My son froze. Dr.