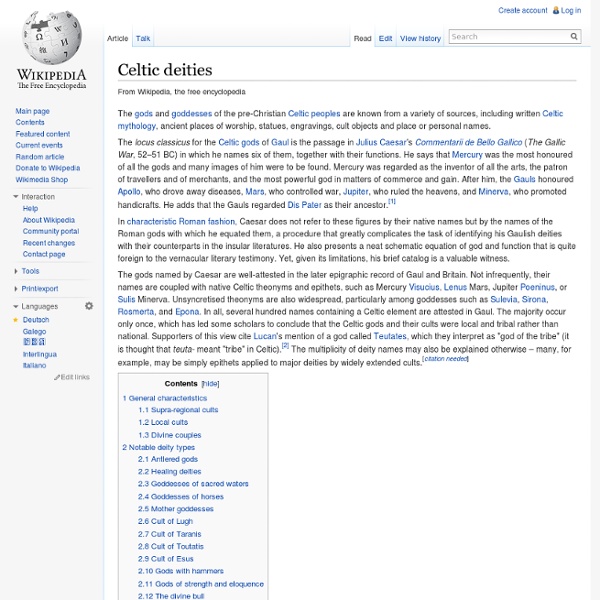 The gods and goddesses of the pre-Christian Celtic peoples are known from a variety of sources, including written Celtic mythology, ancient places of worship, statues, engravings, cult objects and place or personal names. In characteristic Roman fashion, Caesar does not refer to these figures by their native names but by the names of the Roman gods with which he equated them, a procedure that greatly complicates the task of identifying his Gaulish deities with their counterparts in the insular literatures. He also presents a neat schematic equation of god and function that is quite foreign to the vernacular literary testimony. Yet, given its limitations, his brief catalog is a valuable witness. General characteristics[edit] Supra-regional cults[edit] Among the divinities transcending tribal boundaries were the Matres, Cernunnos, the sky-god and Epona, the horse-goddess, who was invoked by devotees living as far apart as Britain, Rome and Bulgaria. Local cults[edit] Divine couples[edit]

Celtic mythology Overview[edit] Though the Celtic world at its apex covered much of western and central Europe, it was not politically unified nor was there any substantial central source of cultural influence or homogeneity; as a result, there was a great deal of variation in local practices of Celtic religion (although certain motifs, for example the god Lugh, appear to have diffused throughout the Celtic world). Inscriptions of more than three hundred deities, often equated with their Roman counterparts, have survived, but of these most appear to have been genii locorum, local or tribal gods, and few were widely worshipped. However, from what has survived of Celtic mythology, it is possible to discern commonalities which hint at a more unified pantheon than is often given credit. Celtic mythology is found in a number of distinct, if related, subgroups, largely corresponding to the branches of the Celtic languages: Historical sources[edit] Irish mythology[edit] Cuchulainn carries Ferdiad across the river

Horned God The term Horned God itself predates Wicca, and is an early 20th-century syncretic term for a horned or antlered anthropomorphic god with pseudohistorical origins[4] who, according to Margaret Murray's 1921 The Witch-Cult in Western Europe, was the deity worshipped by a pan-European witchcraft-based cult, and was demonized into the form of the Devil by the Mediaeval Church. The Horned God has been explored within several psychological theories, and has become a recurrent theme in fantasy literature.[5]:872 Horned God of Wicca[edit] For Wiccans, the Horned God is "the personification of the life force energy in animals and the wild"[6] and is associated with the wilderness, virility and the hunt.[7]:16 Doreen Valiente writes that the Horned God also carries the souls of the dead to the underworld.[8] In the name of the Lady of the Moon, and the Horned Lord of Death and Resurrection[12] Names of the Horned God[edit] Horned God in psychology[edit] Jungian analysis[edit] Humanistic psychology[edit]

Celtic polytheism Celtic polytheism, commonly known as Celtic paganism,[1][2][3] comprises the religious beliefs and practices adhered to by the Iron Age peoples of Western Europe now known as the Celts, roughly between 500 BCE and 500 CE, spanning the La Tène period and the Roman era, and in the case of the Insular Celts the British and Irish Iron Age. Celtic polytheism was one of a larger group of Iron Age polytheistic religions of the Indo-European family. It comprised a large degree of variation both geographically and chronologically, although "behind this variety, broad structural similarities can be detected"[4] allowing there to be "a basic religious homogeneity" amongst the Celtic peoples.[5] The Celtic pantheon consists of numerous recorded theonyms, both from Greco-Roman ethnography and from epigraphy. Among the most prominent ones are Teutatis, Taranis and Lugus. In the later 5th and the 6th centuries, the Celtic region was Christianized and earlier religious traditions were supplanted.

Green Man Types[edit] Lady Raglan coined the term "Green Man" in her 1939 article "The Green Man in Church Architecture" in The Folklore Journal.[3] Some commentators conflate or associate the term with "Jack in the Green".[4] Usually referred to in works on architecture as foliate heads or foliate masks, carvings of the Green Man may take many forms, naturalistic or decorative. The simplest depict a man's face peering out of dense foliage. Some may have leaves for hair, perhaps with a leafy beard. Often leaves or leafy shoots are shown growing from his open mouth and sometimes even from the nose and eyes as well. The Green Man appears in many forms, with the three most common types categorized as: the Foliate Head: completely covered in green leavesthe Disgorging Head: spews vegetation from its mouththe Bloodsucker Head: sprouts vegetation from all facial orifices (e.g. tear ducts, nostrils and mouth)[5][6] In churches[edit] Later variations[edit] Modern images[edit] Related characters[edit]

Celtic Connection Entry to Wicca, Witchcraft and Pagan Pages Cultural Anthropology Terms avunculocal residence band barter believed behavior what people honestly believe that they are doing in their lives rather than what they think they should be doing or what they actually are doing. berdache bewitching bilateral descent bilineal descent the {*style:<a href='javascript:JumpTo('#cognatic_descent')'>*}cognatic pattern of descent in which an individual is both a member of his mother's matrilineage and his father's patrilineage. bisexual Black English the social dialect spoken by many African Americans. biological anthropology body language boundary maintenance (in reference to ethnic groups) reinforcing an ethnic group's unity and distinctness by emphasizing the traits that set its members apart from others, rather than what they share in common with them. bound morpheme bride price bride service bureaucracy an administrative system that divides governing tasks into specific categories carried out by different individuals and/or departments. caste cereals the edible seeds of grasses.

The Post Hole Archaeology remains subservient to, and parasitic upon, history (Moreland 2003, 103) After being an archaeology student for two years now, I can quite safely say I have learnt three things: Firstly, you must NEVER like theory, or admit to even understanding it until you reach MA level at the very least. Secondly, all prehistoric archaeology students see themselves as the true archaeologists as everyone else cheats with text. There is such a thing as historical archaeology; it is not a myth, yes it is different from history, and no, we do not cheat. The opening quote by Moreland startled me into writing this article. First, to understand the long assumed relationship between history and archaeology, we must return to Hawkes ladder of influence; The view at this time was that archaeology could only inform scholars about basic production and consumption activities. Click to enlarge Figure 1. Another form of settlement that can be used as an example is that of the deserted medieval village.