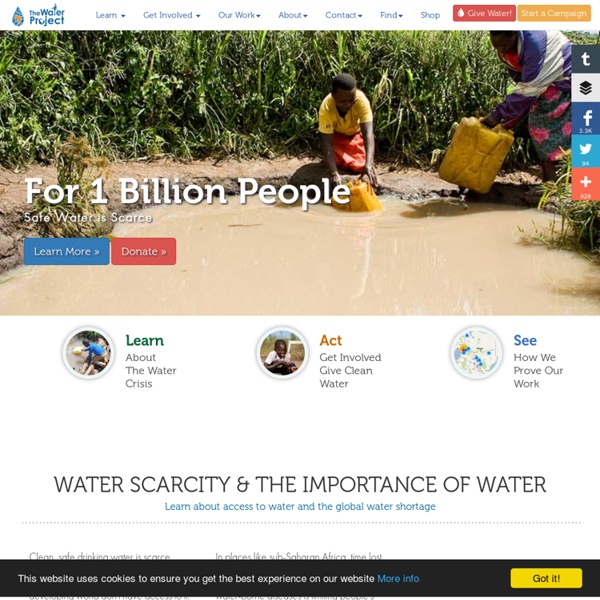 A global shortage Not all wet As we in water-rich countries take our daily showers, water the lawn or laze about in the pool, it's easy to forget that fresh water is a life-or-death issue in many parts of the world. Of a population of roughly 6.1 billion, more than 1 billion lack access to potable water. The World Health Organization says that at any time, up to half of humanity has one of the six main diseases -- diarrhea, schistosomiasis, or trachoma, or infestation with ascaris, guinea worm, or hookworm -- associated with poor drinking water and inadequate sanitation. Parched places One glance at the map tells you that water is shortest in equatorial countries, often where populations are rising. China, with 1.26 billion people, is "the one area worrying most people most of the time," says Marq de Villiers, author of the recently published "Water " (see bibliography). "They're disgraceful, unusable, industrial sewers," says de Villiers. Can't anyone get along?

What we do - The crisis 650 million people don’t have access to safe water. Without this basic service, they have no choice but to drink dirty water that could kill them. Can you imagine life without safe water to drink? For millions of people it's a daily reality. Everyone, everywhere needs a safe and sustainable supply of water: for drinking, washing, cleaning, cooking and growing food. Governments around the world have not done enough to ensure safe water reaches the poorest and most marginalised people in society. In many countries around the world, taps, wells and pipes simply don’t exist. Women and girls suffer the most. Find out how we transform lives with safe water > Peak Water: What Is it -- and Are We There Yet? | Water January 27, 2011 | Like this article? Join our email list: Stay up to date with the latest headlines via email. Peak water is coming. We're never going to run out of water -- water is a renewable natural resource (mostly). Water Number: Three (3) definitions of "peak water." Peak Renewable Water: This is the limit reached when humans take the entire renewable flow of a river or stream for our use. Increasingly, we are reaching peak renewable limits on many of our rivers and streams. Peak Non-Renewable Water: While much of our water supply is renewable, there are "non-renewable" water sources as well, where our use of water depletes or degrades the source. Peak Ecological Water: The third definition, and perhaps the most important (and difficult) one, is peak "ecological" water -- the point where any additional human uses cause more harm (economic, ecological, or social) than benefit.

Poverty and Water in Africa Poverty and Water are Related Read more about...Health Hunger Poverty Education There are a number of reasons why poverty has become an epidemic in Africa. Poverty can be the result of political instability, ethnic conflicts, climate change and other man-made causes. But one of the greatest causes of poverty in Africa is also the most overlooked...the lack of access to clean drinking water. Nearly one billion people do not have access to clean, safe water - that's the equivalent of 1 in 8 people on the planet! For these people, poverty is a fact of life. The foundation of all development The lack of water is an often insurmountable obstacle to helping oneself. Without clean water, the possibility of breaking out of the cycle of poverty is incredibly slim. With unclean water sources often miles from villages, many of the able bodied members of a community are forced to spend hours each day simply finding and transporting water. Wasted Time ...And how you can join us How can you help?

We can no longer waste water like Romans « Water Quality and Security I am happy to present fellow blogger and author, David Zetland, of the Aguanomics blog and The End of Abundance: economic solutions to water scarcity. This week David agreed to lend his expertise to the community on the topics of water pricing, reducing Non-Revenue Water (NRW) and incentives to induce change. I hope you enjoy, and please check out his blog for more great insights. Here we go… Around the world, urban water suppliers use similar technology: the pipes, pumps and valves that move water from central treatment plants to household taps. But that doesn’t mean that taps aren’t open somewhere else in the system that serves our houses. The industry uses the term “non revenue water” (NRW) to refer to water that’s lost, stolen or not paid for. Most water managers know their NRW statistics. Indifferent managers usually pay more attention to NRW when their supplies are limited or when water is expensive. There are many ways to reduce NRW. Like this: Like Loading...

Water, sanitation & hygiene Women and girls from remote mountain villages in North Vietnam walk up to three hours a day to haul water back to their houses for cooking. Here in Australia we turn on our taps. Fresh, clean accessible water for drinking and for cooking. We all need it, only some of us have to go to the limits of human endurance to get it. Almost 900 million people in the world do not have access to clean water – or one in eight people. Unclean water, poor sanitation and unsafe hygiene practices have claimed more lives over the past century than any other cause – and this is continuing in many developing countries – making this one of the world’s most urgent health issues. So, what do we do? Get some of the world’s best water and sanitation engineers and public health specialists with a can-do attitude on to the job. Every second counts in times of crisis. Australia’s overseas aid budget has suffered from successive cuts.