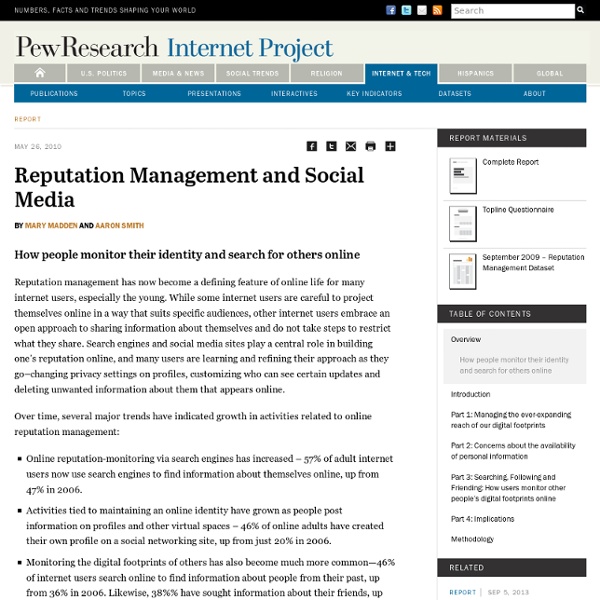 How people monitor their identity and search for others online Reputation management has now become a defining feature of online life for many internet users, especially the young. While some internet users are careful to project themselves online in a way that suits specific audiences, other internet users embrace an open approach to sharing information about themselves and do not take steps to restrict what they share. Search engines and social media sites play a central role in building one’s reputation online, and many users are learning and refining their approach as they go–changing privacy settings on profiles, customizing who can see certain updates and deleting unwanted information about them that appears online. Over time, several major trends have indicated growth in activities related to online reputation management: Young adults are the most active online reputation managers in several dimensions. Those ages 18-29 are more likely than older adults to say: Related:  Social Media & Reputation Management

Digital Footprints The nature of personal information is changing in the age of Web 2.0. The vast array of data points that make up “personal information” in the age of online media are nearly impossible to quantify or neatly define. Name, address, and phone number are just the basics in a world where voluntarily posting self-authored content such as text, photos, and video has become a cornerstone of engagement in the era of the participatory Web. The more content we contribute voluntarily to the public or semi-public corners of the Web, the more we are not only findable, but also knowable. Internet users are becoming more aware of their digital footprint; 47% have searched for information about themselves online, up from just 22% five years ago. Unlike footprints left in the sand at the beach, our online data trails often stick around long after the tide has gone out. Few monitor their online presence with great regularity. Among adults who create social networking profiles, transparency is the norm.

Social Media and Reputation Management Online Reputation is something which people and businesses alike have been paying an increased attention to in the recent past. It has become very important for businesses to monitor and respond to things that are being said about them online. Initially it was industries like travel and hospitality that had to really keep tabs on online reputation management, but this has now changed. Industries like Information Technology, Electronics, telecommunication and even Entertainment and Sports are paying attention to their online reputations. Social Media in the last decade has grown to a great extent, revolutionizing the internet through its ability to connect people and bring them closer. This is true not only for people but also for brands. Also, a recent survey tells us that 22% of people who have had a bad experience are likely to comment about it online while only 9% of people who have had a good experience will do the same. (online reputation management / shutterstock) Connect:

List of Theories and Theorists—A First Look at Communication Theory Share: The list below contains theories that are or have been covered in A First Look at Communication TheoryFull = a chapter in the 7th edition is dedicated to this theory.Brief = the theory is discussed in the 7th edition, but not assigned a full chapter.Archive = the theory was covered in a full chapter in previous editions. A pdf from the last edition in which it appears is available.When a theory name is clickable, the link will take you to Theory Resouces for that theory or open the archived chapter. View/Sort by: Theories | Authors You can also view the 7th Edition Table of Contents to see supplementary material as well as theories. * New in the 7th Edition Back to top

Twitter, Facebook, and social activism At four-thirty in the afternoon on Monday, February 1, 1960, four college students sat down at the lunch counter at the Woolworth’s in downtown Greensboro, North Carolina. They were freshmen at North Carolina A. & T., a black college a mile or so away. “I’d like a cup of coffee, please,” one of the four, Ezell Blair, said to the waitress. “We don’t serve Negroes here,” she replied. The Woolworth’s lunch counter was a long L-shaped bar that could seat sixty-six people, with a standup snack bar at one end. The seats were for whites. By next morning, the protest had grown to twenty-seven men and four women, most from the same dormitory as the original four. By the following Monday, sit-ins had spread to Winston-Salem, twenty-five miles away, and Durham, fifty miles away. The world, we are told, is in the midst of a revolution. These are strong, and puzzling, claims. Some of this grandiosity is to be expected. What makes people capable of this kind of activism?

Managing Corporate Reputation Through Social Media | Corporate Reputation Step 1: GetYour D&B® BusinessCredit Report The world has become completely interconnected, and social media is the new fabric of communication among consumers. Facebook, Twitter and similar sites are no longer just for kids; big corporations with billions of dollars at stake must now go social as well if they are to successfully succeed when managing corporate reputation. Social Media is Ubiquitous Internet penetration in North America alone now tops 75%, and the vast majority of time spent online is spent on social media sites like Facebook. Making Social Media Work for Your Brand Managing corporate reputation via social media requires a single key element: authenticity. Take the new Dominos Pizza campaign. Pitfalls and Problems The problem for most big companies when managing corporate reputation via social media is the level of responsiveness; traditional marketers and agencies are not used to this level of real-time feedback. Conclusion

The Revolution Will Not Be Tweeted (Unless It Is) : All Tech Considered hide captionSocial media platforms may not create revolutions, but they sure can amplify them. Jason Nicholls/via Flickr For those who were sure that Twitter, Facebook and the realtime web could either manufacture or replace personal qualities such as being courageous, determined, selfless, disciplined, steadfast and having a charismatic ability to inspire and lead others in moments of great historical importance, I’ve got some bad news. It turns out that’s not case. In his recent New Yorker piece, Small Change, Malcolm Gladwell argues that the social web does not fundamentally change the nature of revolutions. As an example, he describes the Civil Rights sit-ins that began in Greensboro, North Carolina in 1960. By the end of the month, there were sit-ins throughout the South, as far west as Texas. Yes, folks. The realtime, social web is clearly not a required element to organize and execute a high impact revolution. The platforms of social media are built around weak ties.

Corporate Online Reputation Management: New Age Social Media Corporate Online Reputation Management: New Age Social Media When we ask people what they think online reputation management is, the usual response is a dumbfounded look of ignorance. But for some, the immediate concept of this new service is that it is a form of online PR one’s “Internet Resumé”. Here we will take a look at the personal and corporate site of online reputation management. Polishing Your Internet Resumé A recent study from monster.com shows that 77% of employers will google their candidates before hiring them, but headhunters and employment agencies are close to 100% in their use of Google to research the applicants. This gives us a whole new perspective on the importance of your online image, activity, comments and photo publishing. The problem for all of us, in this case, is that the Internet is almost timeless. The image above went viral. For your online resumé there are many tools available. Now let’s talk about businesses. Corporate reputation starts much earlier

Sorry, Malcolm Gladwell, the revolution may well be tweeted | Leo Mirani For a man who has devoted a significant part of his life to documenting "how little things can make a big difference", Malcolm Gladwell is surprisingly dismissive of the power of social networking to effect change. In the latest issue of the New Yorker, he writes that the role played by Facebook and Twitter in recent protests and revolutions has been greatly exaggerated. Gladwell's argument is that social networks encourage a lazy activism that will only extend as far as "liking" a cause but not actually doing anything about it. This is because social networks are built around weak ties, where real activism needs strong bonds. Citing the American example, he points out that "events in the early 1960s became a civil-rights war that engulfed the South for the rest of the decade – and it happened without email, texting, Facebook, or Twitter." Gladwell is right to be sceptical of social media's rah-rah brigade. On Twitter, it is possible to follow journalists tweeting live from Srinagar.

Lin Humphrey: Carnival Cruise Lines: A Prescription for Navigating Rough Media Waters I have watched recent events unfold around Carnival Cruise Lines with a mix of curiosity and sadness. While teaching my marketing class at Texas Tech University, I proudly recounted my time working for Carnival in marketing. Sadly, hardly a week passes without a new hiccup surrounding a Carnival ship. In addition to the Carnival Triumph fire, the line faced propulsion and steering issues on multiple occasions, along with shipyard issues in Mobile. Normally, global firms are able to circumvent PR crises, but this has not happened with Carnival. Even with the news of an operational program to prevent future issues, the media responded with skepticism. Based on my observation as a marketing academic and veteran of the industry, I propose five steps Carnival should take to improve its media problems. Step 1: Face Facts. Cahill indicated that he could not determine the severity of the media problem because of his focus on the lines' consumers. Step 2: Find an Empathetic Spokesperson.