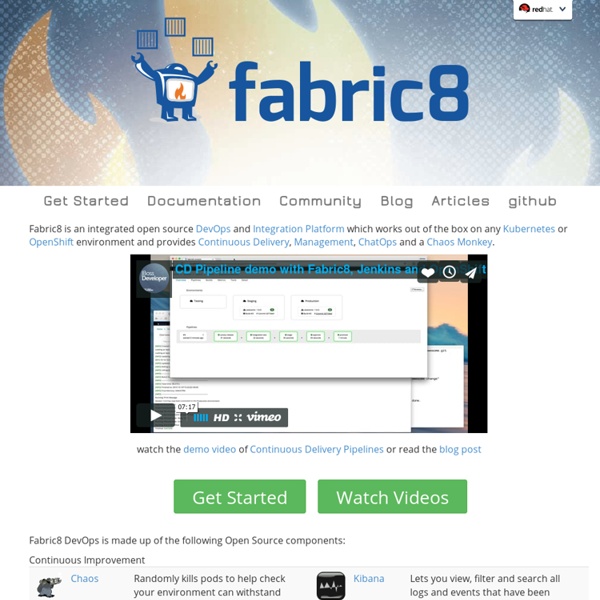 Build a Kubernetes cloud with Raspberry Pi Ever wanted to make your very own cloud? Now you can! All it takes is some cheap open source hardware and open source software. For about $200, I was able to set up four Raspberry Pi 2s with the Kubernetes cloud operating system using Fabric8. Fabric8 is an open source DevOps and integration platform that works out of the box on any Kubernetes or OpenShift environment and provides continuous delivery, management, ChatOps, and a Chaos Monkey. Never before was there a better match between a software architecture and the hardware it runs on. 1. To build this four-Pi setup I used: 4 Raspberry Pi 2s4 16GB MicroSD cards (Class 10)1 60W power supply with USB outlets4 short USB to Micro USB cables (for powering the Pis)4 short Cat 5 network cables1 longer Cat 5 network cable to hook into your network1 network hub (Mine is an old five-port, 10/100MBps I dusted off)LEGOs (Trust me, it feels good to build your own!) 2. Now we need to get the operating system onto the MicroSD Cards. Wait. 3. 4. 5. .

What is Docker? What is Docker? Docker is all about making it easier to create, deploy, and run applications by using containers. Containers allow a developer to package up an application with all of the parts it needs, such as libraries and other dependencies, and ship it all out as one package. By doing so, thanks to the container, the developer can rest assured that the application will run on any other Linux machine regardless of any customized settings that machine might have that could differ from the machine used for writing and testing the code. In a way, Docker is a bit like a virtual machine. And importantly, Docker is open source. Who is Docker for? Docker is a tool that is designed to benefit both developers and system administrators, making it a part of many DevOps (developers + operations) toolchains. Getting started Here are some resources that will help you get started using Docker in your workflow. Docker and security More to read

What is Kubernetes? Container technologies like Docker are allowing for a new approach to the way developers write and deploy applications. With containers, a developer can easily package up an application with all of the parts it needs, including libraries and other dependencies, and ship it all out as one package, but without the overhead of a traditional virtual machine. But containers themselves, and the developer toolchain which make them easy to use, aren’t the full story. In order to build complex applications requiring different components spanning multiple containers on multiple machines, you need tools to manage and orchestrate your containers. One tool which is helping to solve the orchestration needs of containerized applications is Kubernetes. What is Kubernetes? Kubernetes, in short, is an open source system for managing clusters of containers. The Kubernetes project is written in the Go programming language, and you can browse its source code on GitHub. Who wrote Kubernetes?

Containers, virtual machines, or bare metal? Which technology will you use to deploy your next big application? The data center is changing. Again. In the olden days, really not all that many years ago, pretty much every server that sat on a rack in a data center was fairly straightforward (if you could call it that). Each machine ran a single operating system, and often many programs, each requiring their own updates, upgrades, and patches. It was, putting it nicely, a hard situation to maintain, though many management tools emerged to help administrators keep all of their machines safe, secure, and up-to-date. Then virtualization came along, and the world shifted a little. Finally, the new buzz: containers. Not to be outdone, what's old is new again, and both virtual machines and bare metal solutions have kept up with their own sets of updated solutions. All three are probably here to stay, at least for the forseeable future.

How it works - Model the desired state of your infrastructure | Puppet Preview Puppet Explore how Puppet works in seven simple screens. Resources Resources are the fundamental units for modeling system configurations with Puppet. Each resource describes some aspect of a system, like a service that must be running or a package that must be installed. Let’s say, for example, you want to see the current configuration of the root user. GitHut - Programming Languages and GitHub Bringing Devoxx4Kids to Chicago – Devoxx4Kids USA We all know that being a technologist requires you to be a passionate and continuous learner. For many of us this started when we were kids with an initial spark that drew us into working with hardware and software. Now many of us have our own kids and much of our focus has changed to figuring out how to help them find a spark of their own. I’m excited to announce that a group of Chicago technologist have been working with an organization called Devoxx4Kids [1] to bring an event to create such a spark in Chicagoland. We have created a new meetup [2] and have our first event planned for May 3rd at Loyola University in Chicago. We expect to have registration open sometime this month so we’re asking interested parents like you to Save the Date! – Bob Paulin, CJUG President and Devoxx4Kids Chicagoland Organizer

Cramped, unpleasant and vulgar: is this the internet we planned? Laurence Dutton/Getty By Sally Adee DOES anyone remember what the internet was supposed to be? I have hazy memories of a limitless prospect, complete with William Gibson’s consensual hallucinations. Two decades on, and Nicholas Carr’s Utopia is Creepy reveals the reality into which these promises have crystallised. Carr’s targets of “disruption” range from music and cars to breakfast and bras. Then again, Carr has never been much of an enthusiast. It’s all a far cry from Donna Haraway’s “A Cyborg Manifesto”, an essay celebrating technology’s potential to free us from the constraints of gender roles. The first concerns the steady drumbeat of criticism for web 2.0 and user-generated #content. Carr broadens the context: disguising unpaid labour as “fun! “Disguising unpaid labour as ‘fun! A quieter theme is the fear of freedom. Perhaps this explains our drive to taxonomise things to death because we fear just experiencing them. You can hear Carr’s heavy sigh. More on these topics:

4 command-line Linux tools for working with images Images and the command line. They seem an unlikely pair, don't they? There are people who'll tell you that the only way you can manipulate and view graphics is with GUI applications like GIMP. For the most part, they're wrong. Command-line image tools do much of what their GUI counterparts can, and they can do it just as well. Let's take a look at four command-line tools that can ably handle many of your basic (and not-so-basic) image manipulation tasks. GraphicsMagick GraphicsMagick isn't a single application. GraphicsMagick supports over 88 image formats, and gives you a considerable amount of control over how you can manipulate images in those formats. If you find that you're using the same set of commands over and over again, you can combine the GraphicsMagick batch utility with a shell script to run those commands in one fell swoop. Scrot Most Linux distributions come with a simple graphical screen capture tool. You can find Scrot in the package manager of many a Linux distribution.