The Effects Of Negative Emotions On Our Health 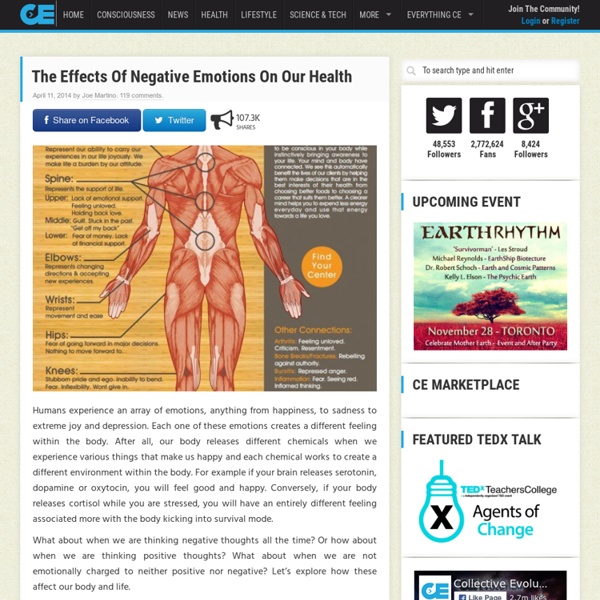 Humans experience an array of emotions, anything from happiness, to sadness to extreme joy and depression. Each one of these emotions creates a different feeling within the body. After all, our body releases different chemicals when we experience various things that make us happy and each chemical works to create a different environment within the body. For example if your brain releases serotonin, dopamine or oxytocin, you will feel good and happy. What about when we are thinking negative thoughts all the time? Positive vs. Is there duality in our world? Cut The Perceptions As Much As Possible After thinking about it for a moment you might realize that there are in fact no positive or negative experiences other than what we define as such. “If someone wishes for good health, one must first ask oneself if he is ready to do away with the reasons for his illness. Mind Body Connection Source : You Have The Power Sources: Related:  Human Body • Physiology & Genetics • Busqueda de empleo

Reprogramming Your Junk DNA Every now and then I come across a stunning example of pseudoscience, an exemplar, almost raising pseudoscience to an art form. Some pieces of scientific nonsense read almost like poetry. Such examples make me wonder what is going on in the mind of the pseudoscientist – to me, the most fascinating question. One example I recently came across is the idea that we can reprogram our DNA through words alone. Only 10% of our DNA is being used for building proteins. The 10% figure reminds me of the trope that we only use 10% of our brains (which is completely untrue). As a very interesting aside, the concept of Junk DNA has recently had some controversy. From the beginning of the concept of non-coding DNA, however, geneticists knew that some non-coding regions were involved in regulating gene expression. Recently the ENCODE project has sought to discover how much of the genome has function. As a further aside, creationists have keyed in on this debate for their own purposes.

Science Theory Shows We Can Reprogram Our DNA to Heal Ourselves with Vibration As though to confirm the hunch many of us had that our ‘junk’ DNA was anything but disposable, researchers from the Gene and Stem Cell Therapy Program at Sydney’s Centenary Institute have proven that 97 percent of human DNA programs or encodes proteins in our bodies. One of the researchers involved in this study said, “this discovery, involving what was previously referred to as “junk,” opens up a new level of gene expression control . . .” This also means there are multiple modalities that mainstream science has yet to give a nod to, which just might re-train or reprogram our DNA — even cells which have become cancerous or are mutilated by the onslaught of toxins in our environment and negative emotional baggage which has been proven to have an undesirable impact on health. Chaos theory states that chaotic appearances are just a very complex system affected by very subtle changes in an almost infinite array of varying possibilities. Russian linguists, Dr. Like this article?

The Healing Power of Cat Purrs Those crazy cat ladies might be onto something. According to today’s infographic, our feline friends provide us with more than just emotional support. House cats may actually be contributing to our physical well-being. When a cat purrs within a range of 20-140 Hertz, nearby humans may be therapeutically benefiting from these vibrations. Pet therapy is apparently gaining momentum in many medical communities, and according to Animal Planet’s website, there is scientific research that suggests pet owners live longer than those without pets. It seems that our own animals have the ability to relieve us of our troubles, or at least make our worries seem less important. So, if you’re trying to convince Mom and Dad to let you get a kitty, go show them this infographic, and stop by your local animal shelter! Share This Infographic Get Free Infographics Delivered to your Inbox

Scientists Discover Children’s Cells Living in Mothers’ Brains The link between a mother and child is profound, and new research suggests a physical connection even deeper than anyone thought. The profound psychological and physical bonds shared by the mother and her child begin during gestation when the mother is everything for the developing fetus, supplying warmth and sustenance, while her heartbeat provides a soothing constant rhythm. The physical connection between mother and fetus is provided by the placenta, an organ, built of cells from both the mother and fetus, which serves as a conduit for the exchange of nutrients, gasses, and wastes. Cells may migrate through the placenta between the mother and the fetus, taking up residence in many organs of the body including the lung, thyroid, muscle, liver, heart, kidney and skin. It is remarkable that it is so common for cells from one individual to integrate into the tissues of another distinct person. Microchimerism is the persistent presence of a few genetically distinct cells in an organism.

What is the Meaning of Life? It’s this. Right now. The meaning of life is… This. I’m not pulling your leg. This right here – What’s happening right now – This is the meaning of life. But… What about helping others? What about love? What about growing as a person? Those things will never happen outside of now. A related question is “why do we exist?” We exist because existence itself, now, the Tao, God, willed us into existence – We in the sense of being our separated minds. In the deepest sense, “I am”. Everything that is, is part of this. I will forget about this. You and I both will have moments of clarity; moments where you stop and suddenly see something that wasn’t there a moment ago – Like a different dimension of thought that momentarily presented itself to you. You feel the residues of that moment of clarity and know that you remembered something you’ve always known, you laugh a bit at how silly you’ve been for forgetting this and at how you thought this life could be anything but profound and beautiful. See things as they are.

A YouTube Video Is Doctor's Secret Weapon Against Back Pain Katherine Streeter for NPR A woman in her late 20s came to see me recently because her back hurt. She works at a child care center in town where she picks up babies and small children all day long. She felt a twinge in her lower back when hoisting a fussy kid. The pain was bad enough that she went home from work early and was laid out on the couch until she came to see me the next day. In my office she told me she had "done some damage" to her back. Back pain is common. In my patient's case, I was confident that her back pain wasn't serious. I wanted to reassure her. But she wasn't buying it. "Don't I need an MRI, or at least an X-ray?" I upped the ante. No dice. A test like that wasn't warranted, in my opinion, because it would neither change her treatment nor the course of this first-ever bout of back pain. She would just get better. To convince her of this, I had to resort to my secret weapon: I showed her an 11-minute educational video created by Dr.

Your Tears Hold Emotions at the Microscopic Level Remember back when we talked about water? Do you remember Dr Emotos studies about how sensitive water is when emotions are projected onto it? Well a photographer named Rose-Lynn Fisher captured photographs of tears at microscopic levels and she found out something that will blow your mind! First of all if you haven’t seen Spirit Science 20, check it out here now! According to various studies there are three types of tears. Basal tears are the natural tears produced in the eyes to lubricate the eye and keep it clear of dust. Rose-Lynn Fisher took electron microscopic pictures of different types of dried tears and once you see these pictures you will see right away that there is a big difference between the different emotions projected onto the water of the tears. Tears of Change Tears of change, photo © Rose-Lynn Fisher, courtesy of the artist and Craig Krull Gallery, Santa Monica, CA Tears of Grief Tears of Ending and Beginning Tears of Laughter Orion Tears Basel Tears Isn’t that powerful?

My 'Naked' Truth | Robin Korth Naked, I stood at the closet doors with the lights on and made myself ready. I took a deep breath and positioned the mirrors so I could see all of me. I consciously worked to remove my self-believed inner image. I am a 59-year-old woman in great health and in good physical shape. Why this brutal scrutiny of myself? We met on a dating site. On Monday evening over the phone, I asked this man who had shared my bed for three nights running why we had not made love. I was stunned. We talked for some time more, my head reeling at the content of the conversation. He explained that now that I knew what was required, we could have a great time in the bedroom. When I told Dave that I never wanted to see or hear from him again, he was confused and complained that I was making a big deal out of nothing. As I looked in the mirror -- clear-eyed and brave -- I claimed every inch of my body with love, honor and deep care. Robin Korth enjoys interactions with her readers. Earlier on Huff/Post50: Alamy

Looking At Tears Under A Microscope Reveals A Shocking Fact. Share on Facebook One day Rose-Lynn Fisher wondered if her tears of grief would look different from her tears of joy, so she began to explore them up close under a microscope. She studied 100 different tears and found that basal tears (the ones that our body produces to lubricate our eyes) are drastically different from the tears that happen when we are chopping onions. Tears from laughing until crying Rose-Lynn Fisher Tears of change Tears of grief Tears from onions Joseph Stromberg of the Smithsonian’s Collage of Arts and Sciences explained that there are three major types of tears: basal, reflex, and psychic (triggered by emotions). Basal tears Tears of timeless reunion Tears of ending and beginning Tears of momentum, redirected Tears of release Tears of possibility and hope Tears of elation at a liminal moment Tears of remembrance Credit: Rose-Lynn Fisher Like snow flakes and fingerprints, no tears are alike.

'Quadruple helix' DNA seen in human cells 20 January 2013Last updated at 14:19 ET By Jonathan Amos Science correspondent, BBC News A representation of the four-stranded structure (L) with fluorescent markers revealing its presence inside cells (R) Cambridge University scientists say they have seen four-stranded DNA at work in human cells for the first time. The famous "molecule of life", which carries our genetic code, is more familiar to us as a double helix. But researchers tell the journal Nature Chemistry that the "quadruple helix" is also present in our cells, and in ways that might possibly relate to cancer. They suggest that control of the structures could provide novel ways to fight the disease. "The existence of these structures may be loaded when the cell has a certain genotype or a certain dysfunctional state," said Prof Shankar Balasubramanian from Cambridge's department of chemistry. Tag and track Today, the pair's modern counterparts in the university city continue to work on DNA's complexities. 'Funny target'