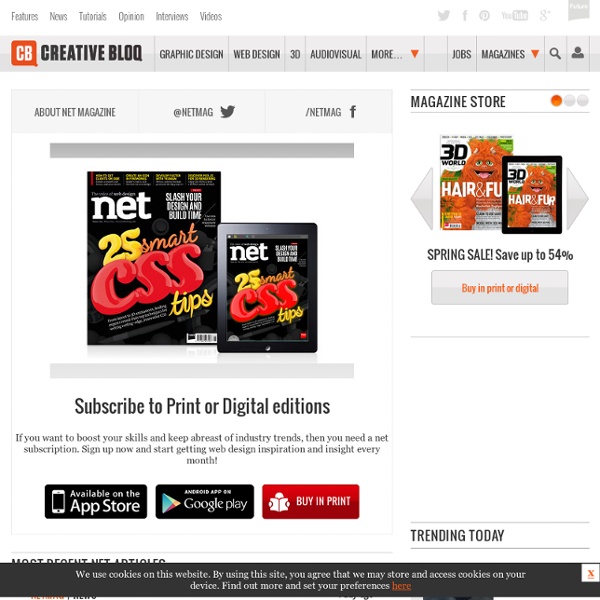 net magazine is the number one choice for the professional web designer and developer. It’s here that you find out about the latest new web trends, technologies and techniques – all in one handy package. Each issue boasts a wealth of expert tips and advice, including in-depth features and over 30 pages of advanced front- and backend tutorials on subjects as diverse as CSS, HTML, JavaScript, WordPress, PHP, and plenty more. net compiles the hottest new sites from around the web, and being the voice of web design, our mission is to source the best articles written by the best people in the industry and feature interviews and opinions crammed with inspiration and creative advice. In short, If you're serious about web design and development, then net is the magazine for you. Editorial Advertising

22 free tools for data visualization and analysis You may not think you've got much in common with an investigative journalist or an academic medical researcher. But if you're trying to extract useful information from an ever-increasing inflow of data, you'll likely find visualization useful -- whether it's to show patterns or trends with graphics instead of mountains of text, or to try to explain complex issues to a nontechnical audience. There are many tools around to help turn data into graphics, but they can carry hefty price tags. The cost can make sense for professionals whose primary job is to find meaning in mountains of information, but you might not be able to justify such an expense if you or your users only need a graphics application from time to time, or if your budget for new tools is somewhat limited. If one of the higher-priced options is out of your reach, there are a surprising number of highly robust tools for data visualization and analysis that are available at no charge. Data cleaning

Radar graphs: Avoid them (99.9% of the time) Stephen Few doesn't like radar graphs, and he's not the only one who has written against them. In a recent discussion on Twitter, Jon Peltier said that they are "worse than pies" —ouch! Even Andy Kirk, who is usually as polite as a British gentleman can be, doesn't have nice words about this kind of display. Most of the arguments against radar graphs can be summarized in a couple of sentences from this post by Graham Odds: "Even with a common scale between axes, comparing values across them remains cumbersome and error-prone.

5 More HTML5 APIs You Didn’t Know Existed The HTML5 revolution has provided us some awesome JavaScript and HTML APIs. Some are APIs we knew we've needed for years, others are cutting edge mobile and desktop helpers. Regardless of API strength or purpose, anything to help us better do our job is a step in the right direction. I recently shared with you 5 HTML5 APIs You Didn’t Know Existed in the hope that some of them would inspire you to improve your own web apps. I'd like to share with you 5 more lessor known HTML5 APIs -- hopefully you find some of them useful! Fullscreen API

Global Carbon Footprints About this graphic Graphics by Stephen Rountree and Adam Marr Source: World Resources Institute CAIT 2.0 climate data explorer Emissions data and national boundaries are from 2010. For current emissions, per capita emissions, and intensity, the data are measured in tons of "carbon dioxide equivalent." That is, they include carbon dioxide and five other greenhouse gases (methane, nitrous oxides, hydrofluorocarbons, perfluorocarbons, and sulfur hexafluoride) as measured by their global warming potential. Cumulative emissions are measured in tons of carbon dioxide only. The emissions of Brazil and Indonesia may be understated because the numbers do not include calculations on land use change and forestry.

Canvas From Scratch: Introducing Canvas This is the first article in a series that will bring you up to speed with HTML5 canvas, the plugin-less drawing functionality built into modern browsers. In this introductory article, I'll show you how to access the canvas element, draw shapes, change colours, and erase things. It's a whistle-stop tour of the basics of this amazing new Web technology. Prefer a Video Tutorial?

How to Make an Interactive Network Visualization Networks! They are all around us. The universe is filled with systems and structures that can be organized as networks. Recently, we have seen them used to convict criminals, visualize friendships, and even to describe cereal ingredient combinations. How to Make All Browsers Render HTML5 Mark-up Correctly - Even IE6 HTML 5 provides some great new features for web designers who want to code readable, semantically-meaningful layouts. However, support for HTML 5 is still evolving, and Internet Explorer is the last to add support. In this tutorial, we'll create a common layout using some of HTML 5's new semantic elements, then use JavaScript and CSS to make our design backwards-compatible with Internet Explorer. Yes, even IE 6.

The 3 Phases of Infographic Design Ever wondered about what goes into the process of making an infographic? Try Google-ing “process of creating a data visualization” and you’d be hard pressed to find a good explanation. Maybe the reason why it’s so difficult to find a good resource is because no real formal process exists. Yet despite the lack of a formal process, there are some distinct phases that designers go through when creating these visualizations. I recently came across a great article from Visualy, where freelance information visualizer,Jan Willem Tulp, discusses just how these popular visualizations are made.