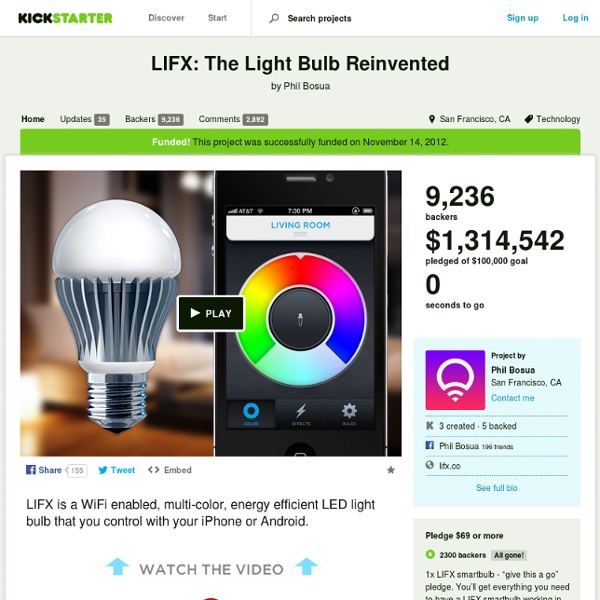 LIFX is the smartest light bulb you've ever experienced. It's a wifi-enabled, energy efficient, multi-colored bulb that you control with your iPhone or Android. LIFX gives you unprecedented control of your lights, reduces your energy costs, lasts up to 25 years and delivers an amazing range of experiences we think you’ll love. LIFX is incredibly easy to set-up. Simply replace your existing bulbs with LIFX smartbulbs, download and install our free app from the App Store or Google Play and you're good to go. We [Phil Bosua, Andrew Birt, Andy Gelme, John Bosua, Ben Hamey, Dave Evans and Guy King] have designed, redesigned and reimagined LIFX many times during the past six months, pouring countless hours into thinking about the user experience, the technical aspects of the project and how to deliver the world's smartest lightbulb to you at an affordable price point. LED lighting is the future of home and commercial lighting around the world. In addition they're unbelievably long-lasting.

Why the mantis shrimp is awesome. They all look the same to me SCORE 109 That escalated quickly SCORE 111 Weird Al Magic Trick SCORE 116 The Lomography Petzval Portrait Lens by Lomography The new Lomography Petzval Lens works using a traditional Waterhouse aperture system. With this design, your lens comes with a set of stops (also known as diaphragms). Each diaphragm is drilled with a hole of a different size; these sizes correspond to the f-stop or aperture.

Ion by lava ION's genesis began with our first Kickstarter project, Ember & Torch (Bluetooth Low Energy development boards) back in June of 2013. One of the demonstrations for Ember that we built was an app-controlled LED lamp. We demonstrated Ember, Torch, and the LED lamp at Social Media Day Detroit 2013. We quickly discovered that visitors were more interested in where they could purchase the lamp than Ember & Torch. Due to this overwhelming positive response to the lamp, we knew it was time to take it to the next level and create a consumer product. ION was born. containerbay There is growing interest in the use of shipping containers as the basis for habitable structures. These "icons of globalization" are relatively inexpensive, structurally sound and in abundant supply. Although, in raw form, containers are dark windowless boxes (which might place them at odds with some of the tenets of modernist design...) they can be highly customizable modular elements of a larger structure.

A Modern Pop-Up Children's Storybook That Uses Augmented Reality Australia-based Resin is a company that has recently developed a modern pop-up book using augmented reality. By taking an existing storybook, “Two Left Feet”, they have brought it to life using 3D animation and augmented reality. To experience the fun, one does not need to own the storybook.You are also able to print out images to experience the same augmented reality. The app recognizes artwork from the book and brings it to life with beautiful moving animations. It is not reliant on reading QR codes. It also works with all the features for people without the book and is narrated so children who cannot read can experience the story on their own.

AGENT: The World's Smartest Watch by Secret Labs + House of Horology If you missed our Kickstarter campaign, you will still be able to get your own AGENT smartwatch. Please visit agentwatches.com for more info. Let's talk about a generational leap forward in smartwatch technology. Smartwatch batteries are less than 10% the size of smartphone batteries. Yet while we're thrilled when a smartphone lasts the entire day on a charge, we're frustrated when a tiny smartwatch battery doesn't last the week. So smartwatch designers have compromised to conserve battery power—limiting us to simple apps, minimal connectivity and primitive developer tools.

How One Teacher Turned Sixth Grade Into An MMO Editor’s Note: Ben Bertoli is a long-time Kotaku reader and commenter, a lifetime, dedicated video gamer and a sixth-grade teacher in Indiana. He reached out to Kotaku this past week to share the story of how he turned his class into a role-playing game. The enthusiasm and motivation of the children in Bertoli’s class evoke the success stories seen in gamified experiences such as Fitocracy. Here, Bertoli explains his creation, ClassRealm, how it works and what motivated him to develop it. The Buccaneer® - The 3D Printer that Everyone can use! by Pirate3D Inc Manufacturing timeline and Stretch goals sections are at the very end for those who just want to go there. FAQ is also at the back, do check it out in case the questions you have are already answered there. Hi everyone! We have had many requests to see the internals of our 3D printer while it is printing. We ripped out the mechanics from our final casing and placed them into our prototype casing (which is transparent) for all of you to see! You may notice the internals are slightly different from our main video and the reason for this is the progress we have made from the time we applied for Kickstarter until the day it is launched.

World’s First Perpetual Motion Machine? Can this machine operate forever? Since at least the 12th century, man has sought to create a perpetual motion machine; a device that would continue working indefinitely without any external source of energy. A large scientific contingent thinks such a device would violate the laws of thermodynamics, and is thus impossible.