How to Paint a Furry Cartoon Character in Photoshop 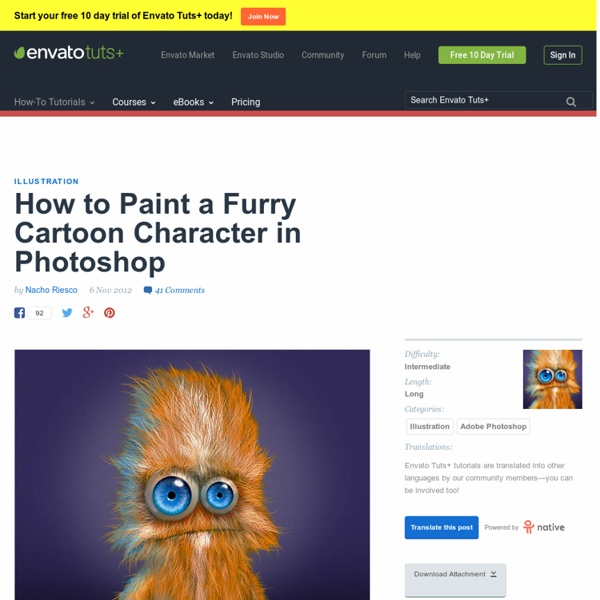 In this tutorial, we will explain how to create a furry cartoon character in Photoshop. Let's get started! Tutorial Assets The following assets were used during the production of this tutorial. Step 1 When you design characters, start doodling to find the shape and proportions is a good way to get something interesting, and a good starting point to get the base of what will be the final creation. Step 2 Once the idea is clear, let's start creating. Step 3 Now, let's create the iris, to save time we will create one eye, and then copy and paste it on the other one afterwards. Step 4 For the iris texture will be necessary to create a custom brush, which subsequently will be useful for the fur also. Step 5 Once brush is created, it's time to adjust its settings, go to Brush Settings (F5) and on the Brush Tip Shape tab adjust Spacing slider, and on the Shape Dynamics tab tweak controls as shown, play with them making some tests till get necessary behavior, idea is to paint a radial iris texture.

Infographic: Professionals vs. amateurs Ever wondered where all the money in web design goes? Perhaps you’d like to take a larger cut of it? Well this fantastic infographic from Webydo will help explain just where all that money gets spent, as well as where businesses are succeeding and failing. Webydo is a fantastic website builder that enables designers to skip the development process, and design a website using an intuitive drag and drop interface instead.

Tips on Making Temari Balls Simple and inexpensive materials are easy to find and fun to combine. A Styrofoam® ball forms the core, a layer of batting is applied and trimmed to the ball, thin yarn is randomly wrapped over, then sewing thread is randomly wrapped on the outside of the ball. These layers produce a cushioned surface to stitch into. Preparation of a ball takes only about 20 minutes. The Secret... A plain paper strip with no numbers creates all of the patterns!

Digital Painting In Photoshop: The Magic Box Learn HUNDREDS Of Digital Painting Pro Workflows, Techniques & Time-Savers Step-By-Step! Detail image from my ‘Animal Farm’digital painting for ImagineFX Magazine.[ click to enlarge ] Digital painting is powerful. The various effects and moods you can achieve with Photoshop and a digital tablet now seem infinite. The speed at which you can craft a beautiful image of an imagined world is mind-blowing. Digital painting is unlike any artistic medium in the history of visual storytelling. How To Create a Text Portrait Effect in Photoshop In today’s Photoshop tutorial we’re going to create a cool portrait effect using a long passage of text that bends and deforms around the contours of the face. Known as a Calligram, this effect is particularly powerful when used to present famous quotes or speeches by depicting the author/speaker with the actual words. Photoshop’s Displace filter is the key ingredient in this recipe which allows us to accurately wrap the text around the subject. In my example, I’m combing a stock photo with a transcript of the speech from the movie The American President (1995) to create a totally fictional presidential address, but this calligram effect would be a great style for a series of famous speeches from the real American presidents of the past. Begin with your chosen image in Photoshop.

Change the colour of part of an image using layer masks. For this tutorial I am going to use an image from Wikimedia commons by Sebastianjude. Step 1. Open your image in Photoshop. Original image How To Create a Realistic Money Effect in Photoshop The classic illustration style used on money is something I’ve always wanted to figure out how to replicate in Photoshop. There’s plenty of Photoshop tutorials that show how to create a basic halftone line effect, but they never quite capture that authentic engraved look with plenty of shading and tone. After lots of trial and error I finally managed to figure it out, so here’s an in depth tutorial on how to create a realistic money illustration effect in Photoshop (with some help from Illustrator!). The effect we’ll be creating in today’s tutorial is this vintage engraved or etched illustration style that builds up the tonal areas of an image with lots of tiny lines. Unlike the basic halftone line effect used in other tutorials, this method actually uses curved and wavy lines that vary in weight to produce an accurate replica of this classic illustration technique.

An Incredible Collection of Character Design and Tutorials by Max Kostenko Here we have some great character design by Max Kostenko, an up and coming illustrator and character designer from Russia, he has digitally painted some awesome 3D characters all of which feature fantastic expressions and personality, also you should notice that most of his paintings feature some great humour, my favourite example being the Superman painting. Pure genius. He also likes to help out a bit with small step by step animations, screenshots and videos! We also have a few of them below for you to check out. But be sure to see more over on his portfolio and blog. Various Tutorials by Max Kostenko -

Pop Art Comic Strip Step 5: Create a new layer and change the blending mode to multiply. Start painting with different colors to different parts of the body on different layers. Step 6: To make a colored layer into halftone pattern. Choose Image > Adjustments > Threshold and drag the slider to the left until the color disappears. Step 7: Select Filter > Sketch > Halftone Pattern and move the contrast slider to the right and adjust the size of the checks and click Ok. Remember one thing colors selected as a foreground and background in the tools palette will come in the halftone and final output, nothing to do with the colors you painted in multiply layer.