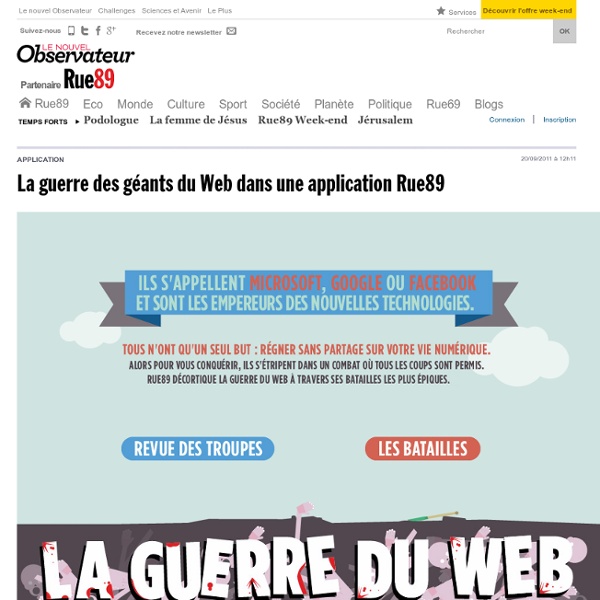 #Occupy movements What is the 'Occupy' movement? Is it a movement, even, or a tactic? Why are there no substantial and coherent demands, and is this an aspect itself of the desire to achieve real democracy? It’s Not A Bursting Bubble. It’s a Correction And It Will Take Awhile. After disappointing post-IPO performances from Facebook, Groupon and Zynga, there’s been a clarion call from top investors like Union Square’s Fred Wilson, Y Combinator’s Paul Graham and Kleiner Perkins’ Mary Meeker for everyone to simmer down with valuations. But from what we can tell, any adjustment is going to take several months. For the very hottest late-stage companies like Fab.com, growth investors don’t seem to be taking any heed from public market skepticism yet.

10 Awesome Free Tools To Make Infographics Advertisement Who can resist a colourful, thoughtful venn diagram anyway? In terms of blogging success, infographics are far more likely to be shared than your average blog post. Being A Fish in Japan - Mischa Kamp and Mascha Halberstad Mischa Kamp Mischa Kamp (1970) graduated from the Netherlands Film and Television Academy (NFTA) in Amsterdam. Her graduation short Mijn moeder heeft ook een pistool (My Mother Has A Gun Too), enjoyed widespread international attention, including selection for the Student Oscars and winning several awards. After graduating, Kamp worked as a director for the Dutch TV show Waskracht! making short films as well as two documentaries Being a Dog in New York and Rafael, Pedro & Adel, shot in Cuba. In 2005, Mischa directed the multiple award-winning family movies Winky's Horse and its 2007 follow-up Where Is Winky's Horseω For the popular Dutch children's program Villa Achterwerk she made Naked – an animated documentary series about the trials of being a teenager, produced by Submarine.

West 86th - Kafka - From the Desk of Roland Barthes Ben Kafka Ben Kafka's article will be appearing in the Vol. 18 No. 2 / Fall 2011 print edition of West 86th. This is an exclusive online preview of his forthcoming article. In this essay, the author examines a brief account by the historian Jacques Le Goff of Roland Barthes's years as an administrator in the Sixth Section of the École Pratique des Hautes Études (which eventually became the EHESS).

Memo to Start-ups: You’re Supposed to Be Changing the World, Rem I did interviews with most of the TechCrunch50 experts backstage and there was a common gripe about the companies launching there: Not enough passion, not enough swinging for the fences, not enough trying to change the world. There were too many people building safe businesses, too many companies just trying to make existing things slightly better, and too many people wanting to be the next Mint.com, not the next Google. Nothing against Mint, but Silicon Valley wasn’t built on $170 million exits. Web visionaries like Reid Hoffman and Sean Parker struggled to come up with positive feedback on stage. Robert “I-get-excited-by-nearly-any-start-up” Scoble was so bored he was playing Hangman via Twitter with Paul Carr. Marc Andreessen praised Udorse—a company that he joked would make the world a worse place if it succeeded—because at least it was a new idea.

How Non-Profits Are Using Social Media Craigslist founder turned philanthropist Craig Newmark set out to discover which U.S. non-profits were the most effective social media users. It turns out, there doesn't appear to be a correlation between social media savvy and an organization's net worth. "The deal is, it's not about money, it's about getting people to talk with each other to make people's lives better," says Newmark, who now focuses his energies on his non-profit craigconnects, which seeks to maximize the use of online tools for the common good.

Interactive Documentary Becoming Human is an interactive documentary experience that tells the story of our origins. Journey through four million years of human evolution with your guide, Donald Johanson. Transcripts are available in the following languages: English, Spanish, Italian, Chinese, and Sinhala. Please note: The Documentary has been converted to HTML5 - the Flash version has been retired.