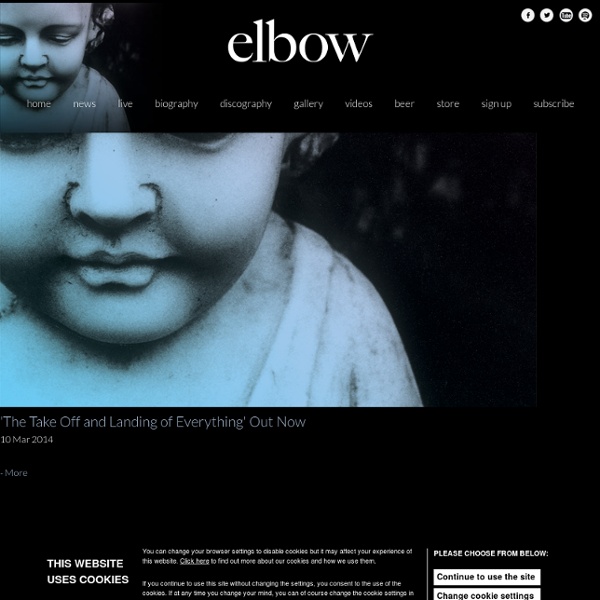 You can change your browser settings to disable cookies but it may affect your experience of this website. Click here to find out more about our cookies and how we use them. If you continue to use this site without changing the settings, you consent to the use of the cookies. If at any time you change your mind, you can of course change the cookie settings in your browser. 'The Take Off and Landing of Everything' Out Now 10 Mar 2014

The Bird And The Bee May 7th, 2013 May 16th, 2012 Recently, TB&TB Merch Gal Nikki solicited fans to send questions to Greg and Inara through the Facebook page. Here is the result. Puppies and Flowers & 60 beautiful vintage Travel Posters - StumbleUpon I recommend clicking on the images for the higher resolution versions. ECM Asthmatic Kitty Records Sufjan Stevens is a singer-songwriter currently living in Brooklyn, NY. A preoccupation with epic concepts has motivated two state records (Michigan & Illinois), a collection of sacred and biblical songs (Seven Swans), an electronic album for the animals of the Chinese zodiac (Enjoy Your Rabbit), two Christmas box sets (Songs for Christmas, vol. 1-5 and Silver & Gold, vol. 6-10), and a programmatic tone poem for the Brooklyn-Queens Expressway (The BQE). His most recent records are from 2010: an expansive EP (All Delighted People) and the full length The Age of Adz, a collection of songs partly inspired by the outsider artist Royal Robertson. Born in Detroit and raised in Northern Michigan, Sufjan attended Hope College, in Holland, Michigan, and the masters program for writers at the New School for Social Research.

Greenpeace UK The Duckworth Lewis Method On paper, a band and album created around the concept of cricket has the sound of something rather niche, hardly universal, and perhaps a little tongue-in-cheek. Clearly their love of the game was very genuine but the greatest thing about The Duckworth Lewis Method was its ability to truly strike a chord beyond the boundary of the cricket field with brilliantly crafted, clever pop songs that were accessible to anyone whether or not they knew their LBW from a googly. This applies even more on the band's second inning, Sticky Wickets. It's quite a challenge for Hannon and Walsh to come back with fresh ideas after pouring what appeared to be every ounce of cricketing history and folklore into their debut. The result, I'm sure, of many a conversation over the years that finally came to fruition, they left very little behind.

Green Gartside: The brainiest man in pop (apart from Brian Eno) Any touring band is used to fans who turn up backstage with old singles, photographs and bits of ephemera to be signed. When Scritti Politti toured America for the first time in 2006, as part of their first live dates of any kind in 26 years, something different would happen. Earnest young men would approach Green Gartside – since 1977 Scritti's singer, songwriter-ideologue and sole constant member – and show him their published works of philosophy, claiming that they owed their interest in critical thought to Scritti's music. "The ratio of tactically deployed pop banality to smartarse references to Kant and Gramsci was occasionally uncomfortably high," admits Gartside of his band-cum-vehicle's commercial zenith in the mid-80s, when hits such as Absolute and The Word Girl snuck such subjects as unconditional reality and semiotics into the pop charts. "I still look for disorienting moments in pop," he says.

Max Ochs Now based in Severna Park, Maryland, Ochs continues to perform, write and record songs in an early folk and blues tradition. He was the curator of the folk music series at 333 Coffeehouse in Annapolis for over a decade. Discography[edit] 1966 Various Artists: Contemporary Guitar (Takoma)1966 Oncones/Imaginational Anthem 45 (Fonotone)2000 Letter to the Editor (Big Ear)2003 Imaginational Anthem LP (Near Mint/Tompkins Square)2007 Got these Blues with Neil Harpe (PPG)2008 Hooray for Another Day (Tompkins Square)

Nataly Dawn The Video The Story Hello and welcome to episode TWO of Dawn Be That Way, featuring guest star (and cousin) Evie MacRunnel with whom I will be making SAVORY FRENCH CREPES!!! Evie and I were super close friends growing up. She even came to visit me when my parents and I moved to France in ‘96.