Forget WiFi, Connect to the Internet Through Lightbulbs - Technology - GOOD 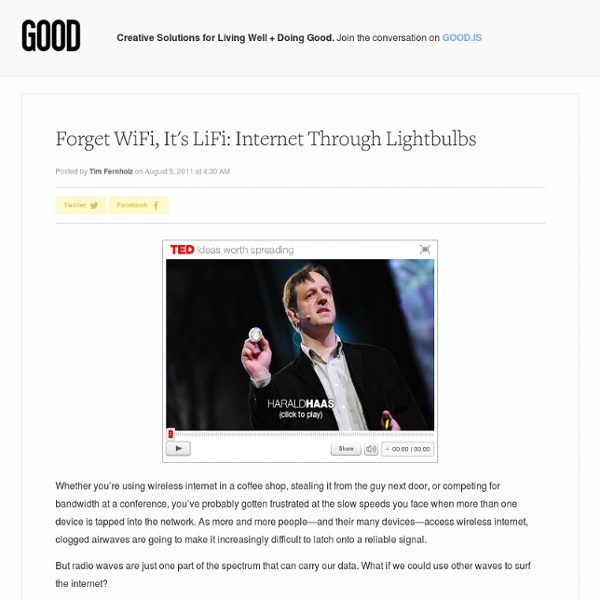 Whether you’re using wireless internet in a coffee shop, stealing it from the guy next door, or competing for bandwidth at a conference, you’ve probably gotten frustrated at the slow speeds you face when more than one device is tapped into the network. As more and more people—and their many devices—access wireless internet, clogged airwaves are going to make it increasingly difficult to latch onto a reliable signal. But radio waves are just one part of the spectrum that can carry our data. What if we could use other waves to surf the internet? One German physicist, Harald Haas, has come up with a solution he calls “data through illumination”—taking the fiber out of fiber optics by sending data through an LED lightbulb that varies in intensity faster than the human eye can follow. It’s the same idea behind infrared remote controls, but far more powerful. Photo (cc) via otto-otto.com

How to Extract DNA from Anything Living First, you need to find something that contains DNA. Since DNA is the blueprint for life, everything living contains DNA. For this experiment, we like to use green split peas. But there are lots of other DNA sources too, such as: Spinach Chicken liver Strawberries Broccoli

10 Gbps Li-Fi system shows wireless data transfer in a new light Light might be the preferred option for transmitting data over long distances via cables, but when it comes to short range wireless, radio waves rule in the form of Wi-Fi and Bluetooth. Now Mexican company Sisoft, working with researchers from the Autonomous Technological Institute of Mexico (ITAM), has developed a wireless technology that transmits data in visible light emitted from LED lamps, while lighting the room at the same time. Called Li-Fi, which is short for light fidelity, the technology is what is known as Visible Light Communication (VLC). How to Build a Robot Tutorial - Society of Robots Introduction to Gears No good robot can ever be built without gears. As such, a good understanding of how gears affect parameters such as torque and velocity are very important. In this tutorial I will first talk about the basics of gears, how to use them properly along with simple equations, and then I will go into specific types of gears. Mechanical Advantage, Torque vs.

Project Li-Fi Eric Packman, August 10, 2013 #hwdesigncontest #buildsomething My project was an attempt to replace my old nemesis, wifi, with an alternative that's safe, secure, fast and not prohibited by the CRTC. It occurred to me that if, for example, an LED driving multimode fiber optics can attain multi-gigabit speeds, why can't LED lighting in the house also communicate information, at least fast enough for home tasks? Build Your Own ELECTRIC MOTORCYCLE The finished project is a 1981 Kawasaki KZ440, converted to electric. It is powered by four Optima Yellow Top sealed (AGM) lead-acid batteries, that drive a Briggs & Stratton Etek electric motor. The speed of the motor is controlled by an Alltrax brand "AXE" programmable controller that can run at up to 48 volts and 300 amps.

Li-Fi Li-1st, the first Li-Fi equipment Li-Fi, as coined by Prof. Harald Haas during his TED Global talk,[1] is bidirectional, high speed and fully networked wireless communications, like Wi-Fi, using light. Li-Fi is a subset of optical wireless communications (OWC) and can be a complement to RF communication (Wi-Fi or Cellular network), or a replacement in contexts of data broadcasting. It is wireless and uses visible light communication or infra-red and near ultraviolet (instead of radio frequency waves), part of Optical wireless communications technology, which carries much more information, and has been proposed as a solution to the RF-bandwidth limitations.[2] A complete solution includes an industry led standardization process. Technology details[edit]

Quadcopter build log 1. Introduction This page will be a walktrough on the creation of my quadcopter. It will be a quick tour as most basiscs are explained in the 'multicopter basics' document as listed on the right. A list of the items I acquired for the project is in on the bottom of this document. DIY CNC Router Plans : How to Build NOTE: I originally posted this on my arts and crafts blog, Make It With Jason, and you're welcome to go visit and check out my other tutorials, reviews, and step by step drawing and painting lessons. Ever since I saw my first CNC, I knew I wanted to own one. I'm a realist though, and I also knew that I wouldn't own a REAL $20,000 one. So, on a whim this spring, I decided to design and build a homemade 3-axis Computer Numerical Controlled milling machine myself.

Visible Light Communications One only needs to read some of the daft comments posted at the foot of online visible light comms articles to understand that there are a large number of misconceptions out there. Here is my Li-Fi myth buster top 10. 1. The lights flicker. We subtly modulate the current supply to the LED devices at relatively high speeds. We are not harshly switching the LEDs on and off, and we are not modulating at speeds anywhere near those perceptible to the human eye. How to Make a Three-Pendulum Rotary Harmonograph A harmonograph is a mechanical device that uses swinging pendulums to draw pictures, believed to be originally invented in 1844 by Scottish mathematician Hugh Blackburn. This 3-pendulum rotary type of harmonograph gives a wide variety of pleasant results, and is fairly easy to build once you've settled on a design and have acquired the appropriate materials and tools. This is a great project to do with kids and can result in endless experiments creating new types of geometric designs.