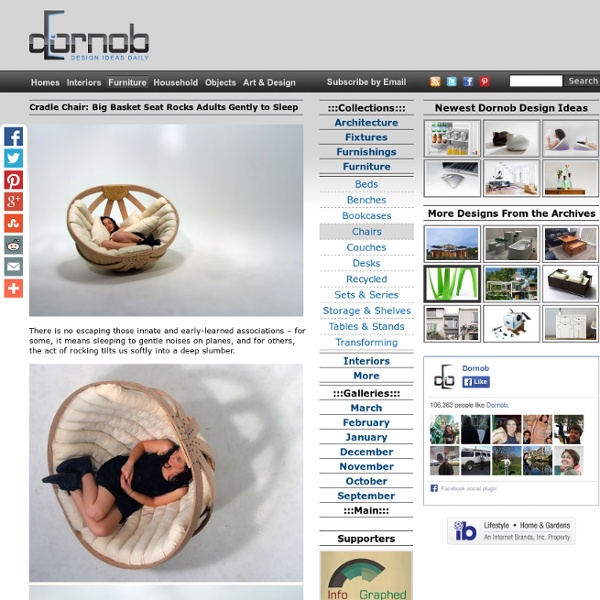 There is no escaping those innate and early-learned associations – for some, it means sleeping to gentle noises on planes, and for others, the act of rocking tilts us softly into a deep slumber. Richard Clarkson and company wanted to create a kind of low-tech, sensory-deprivation, sofa-style seat where one can curl up and forget the workaday worries of ordinary life … and perhaps even doze over before you notice you are slowly falling asleep. While there is art and craft in this object, there is science that went into its design as well. Specifically, research into autistic children and those who suffer from RMD (rhythmic moving disorder) played a crucial role in the shape and structure of the result. For all its theoretical complexity, the final form looks quite simple (and extremely comfortable).

Split Family Faces Cousins: Justine, 29, & Ulric, 29 How much do you and your family members really look alike? Quebec, Canada-based graphic designer and photographer Ulric Collette has created a shockingly cool project where he's exploring the genetic similarities between different members of the same family. By splitting their faces in half and then splicing them together, he creates interesting new people that are sometimes quite normal looking and other times far from it. He calls this series Genetic Portraits. (Did you notice that Ulric, the photographer, is one-half of some of these pairings? DIY: Swing Shelf So…as you can see this pregger mama has been quite busy with all sorts of DIY projects that will complete the room being shared by kiddo #1 and kiddo #2. This project was quick and easy, plus it turned out really cute and was theme-appropriate for my lil’ surfer boys. I was inspired by the adorable Swing Shelf from Pottery Barn Kids (no longer available…bummer dude!). So, what’s a girl to do?

DIY: Furniture Makeovers I'm obsessed with making-over old, worn out furniture. It's amazing how almost any old piece can be totally transformed with new paint, hardware and a little imagination! Here are three examples from Ladies Home Journal...click here to read the entire article. Out-dated side table with stone top transformed into a bright and cheerful accent piece! *First they removed the hardware and stone top, sanded the table all over, and applied a coat of primer.*Then they gave it two coats of semigloss latex paint in a lively citrus hue. Surprise the Ones You Love (14 pics) Dec 24/11 Surprise the Ones You Love (14 pics) Here are instructions for a very special gift for the people you love. + shop + rc. Tiny Cloud from 480.00 Cloud - Smart from 3,360.00

Artist Transforms Stuffy Old Lace Into Fantastic Street Art (Photos) Photos: NeSpoon (via Behance) If you associate hoodie-concealed men sporting spray cans with street art, think again. Think crocheted bicycles, yarn bombing and random acts of planting. To be sure, traditional urban art is dominated by men. But the last decade has seen the rise of a number of talented female urban artists whose diverse subject matter ranges from candy-colored caricatures to abstract shapes and constellations -- and whose tools range from spray paint to more unconventional means of expression.

Hanging Bookshelves « The Runcible Spoon I could be biased, but I think Boyfriend and I might have made the coolest bookshelves in the history of all humankind. Some people look at it, cock their head to the side, and use words like “interesting” to describe it, but I personally think it could probably kick their bookshelves’ ass any day of the week. Okay, maybe that’s a bit dramatic. And I will admit you may need a certain vibe goin’ on in your house to pull this off properly, but still, I think they’re pretty awesome. The idea for these bookshelves stemmed from, well, owning a lot of books and having nowhere to put them. But beyond all the books, we only had a budget of about a hundred bucks. Lost & Found: Comfy Chair Cushioned with Built-In Storage Lighters, keys, coins … cushioned chairs and couches are notorious for nomming all kinds of things that slip out of our pockets or otherwise get left behind and slide into the cracks. This design simply celebrates that existing phenomena, like a giant-sized pin cushion. It may come as no surprised that this clever-but-boxy furniture piece was developed by architectural designers (of Daisuke Motogi Architecture), who have a knack for exposing and expanding uses for classic furnishing types. Pixel-like pads cover the entire surface of the seat both inside and out, forming slots in which one can accidentally drop a small item or intentionally stick a book, magazine, remote and more.

students-faucet-design-saves-water-by Simin Qiu, a design student in London’s Royal College of Art, has come up with a luxurious-looking Swirl Faucet that will save water by turning it into a beautiful, elegant, swirling spiral. Qiu’s design works by sending the water through a double turbine, which spirals as water moves through it, creating an elaborate and beautiful lattice of water streams. The turbine also limits the flow of water by 15%, meaning that you waste less when using it! 3 different nozzles let users choose which water-saving design they’d rather use. The design, which also won an iF Design concept award in 2014, is operated with a touch button on top, which helps it retain its sleek and elegant look.

Incredible Wildlife Photography Wildlife — By Stephanie on January 11, 2010 at 10:58 am Canada goose protects her young Ever have one of those moments when you think to yourself, “Boy, I wish I had my camera?!” Cardboard chair Cardboard chair 1994. Cardboard is a surprising material for building furniture, but a number of designers have found its lightness, strength, warmth and environmental benefits very attractive. Laminated cardboard chairs can be seen in various museums including the New York Museum of Modern Art and the Detroit Institute of Art. Frank Gehry designed several.