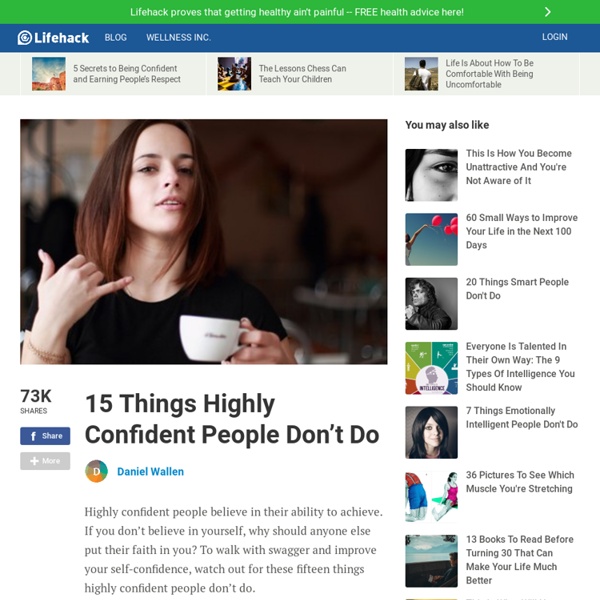 How Stores Manipulate Your Senses So You Spend More Money Your Mind & Body Are Not Separate For more: This isn’t news to anyone, right? We talk about feeling things in “our guts.” We talk about a lump in our throat when we are upset. This graphic is one depiction of some of the places in our bodies that emotions get stuck or stored. While I don’t believe that every disease and ailment is a result of emotional distress, it’s always worth taking a second look at what’s going on internally when you notice chronic pain patterns in your body. A Relephant Read:> “Enlightenment is Simple: the Synchronization of Body, Speech & Mind, Harnessed to the Present Moment.”> Or, What does your Body look like when it feels these 14 basic Emotions? Like elephant health & wellness on Facebook. About Kate Bartolotta Kate Bartolotta is a wellness cheerleader, yogini storyteller, and self-care maven.

How To Waste Time Properly - Issue 7: Waste Ever since Frederick Winslow Taylor timed the exact number of seconds that Bethlehem Steel workers took to push shovels into a load of iron ore and then draw them out, maximizing time efficiency has been a holy grail of the American workplace. But psychologists and neuroscientists are showing us the limits of this attitude: Wasting time, they say, can make you more creative. Even seemingly meaningless activities such as watching cat videos on YouTube may help you solve math problems. Brent Coker, who studies online behavior at the University of Melbourne in Australia, found that people who engage in “workplace Internet leisure browsing” are about 9 percent more productive than those who don’t. Last year, Jonathan Schooler, a psychology professor at the University of California, Santa Barbara published with his doctoral student Benjamin Baird a study called Inspired by Distraction. Schooler isn’t alone in his conclusion. So what kinds of distractions, exactly, are best?

The Art of Wisdom and the Psychology of How We Use Categories, Frames, and Stories to Make Sense of the World by Maria Popova The psychology of how we use frames, categories, and storytelling to make sense of the world. “It’s insulting to imply that only a system of rewards and punishments can keep you a decent human being,” Isaac Asimov told Bill Moyers in their magnificent 1988 conversation on science and religion. And yet ours is a culture that frequently turns to rigid external rules — be they of religion or of legislature or of social conduct — as a substitute for the inner moral compass that a truly “decent human being” uses to steer behavior. Schwartz and Sharpe write: [Aristotle] thought that our fundamental social practices constantly demanded choices — like when to be loyal to a friend, or how to be fair, or how to confront risk, or when and how to be angry—and that making the right choices demanded wisdom. External rules, while helpful in other regards, can’t instill in us true telos. Practical wisdom demands more than the skill to be perceptive about others. The world is gray.

Resource: Online Metro Map Creator One of our recent, most popular and inspirational responses online has been to us promoting a modified tweet via @JamieClark85: Which was inspired by this fantastic Classroom Display created by @LauraLolder: Creating your own version of a metro map is actually quite easy, and a great activity to support pupils learning about different aspects within subjects, or even as connection maps for revision. Click image to view larger version Crudely, we created a map, using the online tool by Beno.org.uk (click here to view in a new window). Working on a PC/Mac (site not compatible with tablets), it is simple to create your own routes, adding stations and connections as you work. Teachers are starting to share how they have used this resource to support students in their subjects. [<a href="//storify.com/ukedchat/metromaps-in-education" target="_blank">View the story &#8220;MetroMaps in Education&#8221; on Storify</a>]

8 Important Reasons To Let Go Of People Who No Longer Play An Important Part In Your Life There comes a point in every person's life when he or she parts ways with someone: ex, friend and anyone in between. Upon first meeting this person, there's a sweet beginning, but once you come to really know each other and grow comfortable, you suddenly realize that the relationship no longer brings any particular value to your life and is perhaps, even detrimental. Sometimes, we hold on to people purely based on how long we have known them. Time can tie people together, but if you feel as though there's nothing substantial keeping you connected, time is not a strong enough reason to hold on to something that's simply no longer worth holding onto. We grow complacent with people once we're comfortable with them. But, hanging onto someone for the pure sake of it and because you don't know anything else isn't a good enough reason. Fear is another reason why we can't move on. Sometimes, things are better left as mere memories. 1. People simply grow a part, which is perfectly normal. 2. 3. 4.

Goethe on the Psychology of Color and Emotion Color is an essential part of how we experience the world, both biologically and culturally. One of the earliest formal explorations of color theory came from an unlikely source — the German poet, artist, and politician Johann Wolfgang von Goethe, who in 1810 published Theory of Colors (public library; public domain), his treatise on the nature, function, and psychology of colors. Though the work was dismissed by a large portion of the scientific community, it remained of intense interest to a cohort of prominent philosophers and physicists, including Arthur Schopenhauer, Kurt Gödel, and Ludwig Wittgenstein. One of Goethe’s most radical points was a refutation of Newton’s ideas about the color spectrum, suggesting instead that darkness is an active ingredient rather than the mere passive absence of light. YELLOWThis is the color nearest the light. Brain Pickings has a free weekly newsletter.