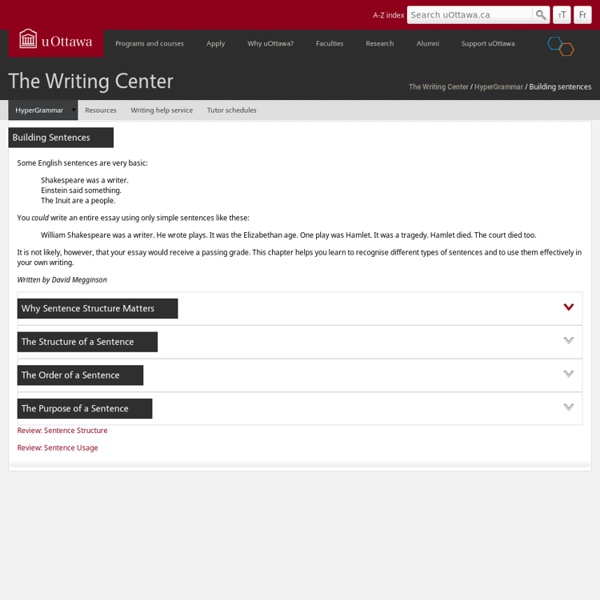 sentence structure Simple sentences: A simple sentence has only one clause: The children were laughing. Compound sentences: A compound sentence has two or more clauses: (We stayed behind) and (finished the job) (We stayed behind) and (finished the job), then (we went home) The clauses in a compound sentence are joined by co-ordinating conjunctions: John shouted and everybody waved. The common coordinating conjunctions are: and – but – or – nor – so – then – yet Complex sentences: A complex sentence has a main clause and one or more adverbial clauses. Her father died when she was very young >>>Her father died (main clause) when (subordinating conjunction) she was very young (adverbial clause) She had a difficult childhood because her father died when she was very young. Some subordinate clauses can come in front of the main clause: A sentence can contain both subordinate and coordinate clauses: There are seven types of adverbial clauses:

English Grammar: a complete guide Do you have a question about the correct usage of the semicolon or how to place adverbs in a sentence? If so, you've come to the right place. Edufind.com is a complete English grammar guide filled with the rules of English usage. Each grammatical rule is explained in plain English with several examples, and when needed, counter-examples. The grammatical rules covered by this guide are categorized below. English grammar is not always easy to understand, but by using this guide you should be able to remind yourself of the rules of English usage and speak or write English with confidence. Nouns Nouns are people, places, or things, They tell us what we are talking about. Adjectives Adjectives modify, or describe, nouns. Adverbs Adverbs modify adjectives, verbs, or other adverbs. Determiners Articles, quantifiers, and other determiners modify nouns. Verbs & Verb Tenses Verbs are action words. Speech When we report what someone says, we can cite the person directly or indirectly. Punctuation

Word classes and phrase classes - English Grammar Today English has four major word classes: nouns, verbs, adjectives and adverbs. They have many thousands of members, and new nouns, verbs, adjectives and adverbs are often created. Nouns are the most common type of word, followed by verbs. Adjectives are less common and adverbs are even less common. Many words belong to more than one word class. It’s an interesting book. We ought to book a holiday soon. He loves fast cars. Don’t drive so fast! A suffix can often, but not always, tell us if a word is a noun, verb, adjective or adverb: A good learner’s dictionary will tell you what class or classes a word belongs to. The other word classes include prepositions, pronouns, determiners, conjunctions and interjections. Prepositions describe the relationship between words from the major word classes. We went to the top of the mountain. Are you ready for lunch yet? Pronouns are words which substitute for noun phrases, so that we do not need to say the whole noun phrase or repeat it unnecessarily.

Education World: Verb-Adverb Charades Subjects Arts & Humanities --Language Arts --Theater Arts Grade [facebookbadge] Brief Description Verbs and adverbs take center stage in this lively activity. Objectives Students will silently act out a variety of verbs and adverbs. Keywords verb, adverb, grammar, pantomime, drama, acting, theater Materials Needed [shopmaterials] a stack of cards labeled with verbs (sample list provided) a stack of cards labeled with adverbs (sample list provided) Lesson Plan This lively activity will reinforce the concepts of verb and adverbs. Before the Lesson Create two sets of cards; each set should be on a different colored paper. Create a set of verb cards on cards of one color, at least one verb card per student. The Lesson This game can be played as a whole class or with the class divided into teams. The other students call out the word the student is acting out. Then the same student who pantomimed the verb chooses and then acts out the word on his or her adverb card. Assessment Lesson Plan Source

Adverb Game It's difficult to find a child who doesn't enjoy performing every once and a while. Get your little thespian in the spotlight while reinforcing one of the important parts of speech—the adverb. Try this adverb “acting out” game with your child for a few laughs and lots of learning fun. What You Need: 20 index cards 20 strips of paper Pencil 2 paper bags What You Do: Before beginning this activity, it might be useful to have a little refresher that will help remind your child what adverbs are, and how they help other parts of speech. By Alicia Danyali Alicia Danyali, BS Elementary Education, taught primary-level students for four years at the International School of Amsterdam, The Netherlands.

School House Rock Grammar Songs Grammar Songs from SchoolHouse Rock Videos are Timeless Countless kids (and more than a few teens) have learned their adverbs and adjectives from these nine Schoolhouse Grammar Rock video songs. My classes, like those across the country, have unpacked their adjectives and spent some time at Conjunction Junction. Even though they're "old school," kids enjoy them as much today as when they were originally released in the 1970's and 80's. In addition to these musical mnemonics, I've included some lesson plan links and links to "new school" interactive websites to help your kids learn their English grammar. Image from the 2007 Interactive DVD, Schoolhouse Rock: Grammar Classroom Edition A Noun is Person, Place or Thing Lolly Lolly Lolly Get Your Adverbs Here Verb: That's What's Happening Rufus Xavier Sarsaparilla - Pronouns The Tale of Mr.