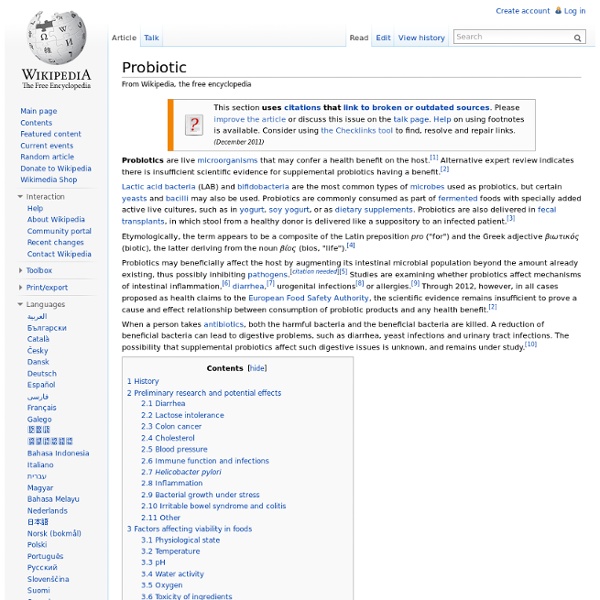 Élie Metchnikoff first suggested the possibility of colonizing the gut with beneficial flora in the early 20th century. Probiotics are microorganisms that some have claimed provide health benefits when consumed.[1] The term probiotic is currently used to name ingested microorganisms associated with beneficial effects to humans and animals.[2] Introduction of the concept is generally attributed to Nobel Prize recipient Eli Metchnikoff, who in 1907 suggested that "the dependence of the intestinal microbes on the food makes it possible to adopt measures to modify the flora in our bodies and to replace the harmful microbes by useful microbes".[3] A significant expansion of the potential market for probiotics has led to higher requirements for scientific substantiation of putative beneficial effects conferred by the microorganisms. Etymology[edit] Definition[edit] Probiotics must have undergone controlled evaluation to document health benefits in the target host. History[edit] Research[edit]

Becky Walsh talks to Grant Soosalu about mbraining Getting in Touch with Your Gut Brain through Belly Breathing | Harmonious Awakening Dennis Lewis G. I. Gurdjieff maintained that we are three-brained beings: intellectual, emotional, and moving/instinctive and that we can learn how to observe these three brains in action. Modern science has mainly looked at the brain as being located in the head and being composed of three basic centers or levels. In simplest terms, these centers, each functioning as a kind of sub-brain, are interrelated networks of nerve cells, each with its own intelligence and memory storehouse. For many hundreds of years the Taoists have spoken of the importance of the “belly brain,” or “little brain,” in health, healing, and self-transformation. The Taoists believe that the gut brain processes not just food but also emotions and other experiences, and that paying attention to this brain, learning to sense it and listen to it, can have an enormous beneficial impact on our lives. Getting in Touch with the Gut Brain Copyright 2010 by Dennis Lewis Like this: Like Loading...

Discover the Three Keys of Gratitude to Unlock Your Happiest Life!: Jane Ransom at TEDxChennai COMPASSION MEDITATION- Part One of Full Program (1) mBraining Life Enhancing Life Enhancing: mBraining - Digest this idea... Here's some interesting food for thought... A fascinating TED talk 'How do we consume data?' by technologist JP Rangaswami, who muses on our relationship to information and offers a surprising and sharp insight: we treat it like food. Knowing in your gut It is known from ancient Chinese historical records that the great sage Li Shizhen, a famous physician from the Ming Dynasty, was a skilled medical practitioner with a great love for medical books. As the story goes… one day at the end of a long and wet rainy season, the rival doctor ordered his servants to lay out his collection of medical books in the courtyard to dry. Passing through the courtyard, Li Shizhen stopped, loosened his clothing and dropped down next to the books. Li Shizhen responded, “I also want to get some sunshine for my books.” His rival asked, “But where are your books then?” Li patted his belly and said, “All my books are in here.” Li Shizhen’s humorous yet insightful rejoinder tells us a lot. Cognitive linguistics

My mind is bigger than my brain: the emerging biology of gut-brain communication – Lucid thoughts A great review just published in Nature Reviews Neuroscience reminded me of something that has continued to puzzle me off and on for many years – what are gut feelings? In 2007 I read a fascinating book called Gut feelings: the intelligence of the unconscious by the cognitive psychologist Gerd Gigerenzer. In it Gigerenzer looks at the research that underpins our understanding of intuition and asked the question “where do these feelings come from?” Enter Emeran Mayer, from the Center for Neurobiology at the University of California, Los Angeles and his 2011 review Gut feelings: the emerging biology of gut-brain communication published in the August edition of Nature Reviews Neuroscience. The recent neurobiology of brain to gut and gut to brain communication is complex. The brain-gut system can be best imagined as a “system of hierarchical reflexes when in homeostasis” (i.e. neither diseased or distressed). So to gut-decisions.