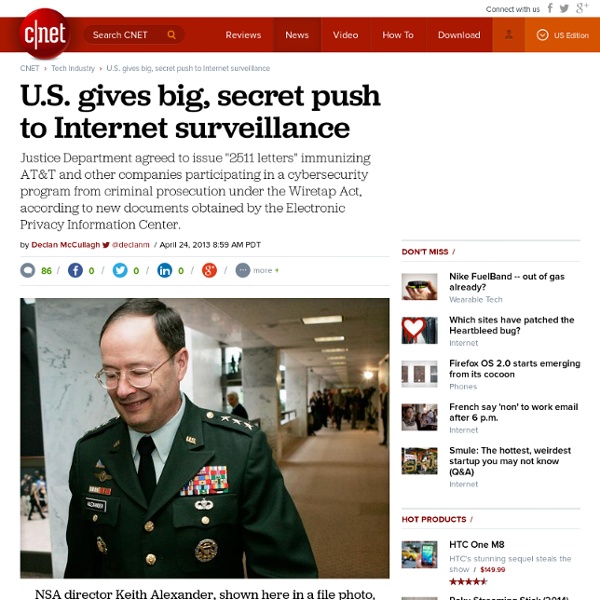 Senior Obama administration officials have secretly authorized the interception of communications carried on portions of networks operated by AT&T and other Internet service providers, a practice that might otherwise be illegal under federal wiretapping laws. The secret legal authorization from the Justice Department originally applied to a cybersecurity pilot project in which the military monitored defense contractors' Internet links. Since then, however, the program has been expanded by President Obama to cover all critical infrastructure sectors including energy, healthcare, and finance starting June 12. "The Justice Department is helping private companies evade federal wiretap laws," said Marc Rotenberg, executive director of the Electronic Privacy Information Center, which obtained over 1,000 pages of internal government documents and provided them to CNET this week. The NSA and DOJ declined to comment. "If you think of it poorly, it's a CYA function," Rosenzweig says. Related:  The NSA and the Internet • US Society

The Incredible Power of XKeyscore By Richard Stiennon Der Spiegel makes light of an incredible tidbit they extracted from a 50-page catalog of exploit technology apparently developed by the NSA’s Tailored Access Operations (TAO). The German newspaper describes, and dismisses as not very threatening the ability of an analyst using XKeyscore to identify a target’s machine, probably by IP address. Then, if that machine ever files a crash report with Microsoft (or presumably any application such as Mozilla’s Firefox) the vast store of data that the NSA has collected is investigated with XKeyscore to recover a copy of that crash report --which was captured, along with everything else, by the NSA’s taps into most network traffic. Wait, what? Crash reports are not encrypted when sent to Microsoft or Mozilla? As if we needed it, here is yet another reminder that software developers can be woefully ignorant of the need for security. But take a moment to contemplate the power of XKeyscore. We already knew about XKeyscore.

Nun, two others face decades in prison for nuclear site breach A nun and two peace activists could spend the rest of their lives in federal prison after being convicted of breaching one of the nation's most secure nuclear facilities. After two days of testimony, a federal jury in Knoxville, Tennessee, found Sister Megan Rice, 83; Greg Boertje-Obed, 57; and Michael Walli, 63, guilty of destroying U.S. government property and depredation against federal property exceeding $1,000. The three are scheduled to be sentenced on September 23. When the guilty verdict was read Wednesday evening, the three defendants appeared content, even singing along with protest hymns before they were taken into custody, according to WATE. "They're at peace about this, they're peace makers, and they knew that they risked this," Joe Quigley, attorney for Walli, told the Knoxville station. Armed with flashlights and a bolt cutter, they cut their way through the fence, fully expecting to be arrested on the spot. But they didn't. Today, changes at Y-12 are noticeable.

‘Smart’ Street Lights Analyze Voices, Track People The company behind a new ‘smart’ street lighting system which is being rolled out in major cities like Las Vegas admits that the technology has the capability of analyzing voices and tracking people, features that will aid the Department of Homeland Security in “protecting its citizens.” We first reported on Intellistreets bragging of its product’s “homeland security” applications back in 2011, with the backlash from privacy advocates causing the company to remove a promotional video from YouTube. The video was later restored (see above), although comments were disabled. However, Illuminating Concepts, the company behind Intellistreets, seems to be more comfortable in acknowledging the “security” aspects of its devices now that it has secured numerous lucrative government contracts to supply street lighting in several major cities. Paul Joseph Watson is the editor and writer for Infowars.com and Prison Planet.com. He is the author of Order Out Of Chaos.

On Human Evil: Concrete Down the Drain Edition, Garett Jones | EconLog | Library of Economics and Liberty When people have little incentive to behave well, and when nobody is watching, what do people do? The last few years have given us millions of opportunities to answer that question as people living in foreclosed homes decided whether to leave those homes in decent condition or to instead pour concrete down the drain. The option chosen by about half of those people? Myra Beams, a realtor in Tamarac, Fla., said half of her foreclosed properties, regardless of the price range, have been vandalized by the former owners. "I think the former owners are angry, and for some reason, they think they're entitled to destroy properties," said Beams. From the New York Times, on whether it was a good time to shop for foreclosed homes: "The pour-concrete-down-the-toilet trick is one that most good [home] inspectors know to look for." ...Baseboards, appliances and a brick pathway completely removed....Cement poured down toilets.....Then, there's the one about a slew of dead fish left to rot in an attic.

The internet is fucked In a perfect storm of corporate greed and broken government, the internet has gone from vibrant center of the new economy to burgeoning tool of economic control. Where America once had Rockefeller and Carnegie, it now has Comcast’s Brian Roberts, AT&T’s Randall Stephenson, and Verizon’s Lowell McAdam, robber barons for a new age of infrastructure monopoly built on fiber optics and kitty GIFs. And the power of the new network-industrial complex is immense and unchecked, even by other giants: AT&T blocked Apple’s FaceTime and Google’s Hangouts video chat services for the preposterously silly reason that the apps were "preloaded" on each company’s phones instead of downloaded from an app store. Verizon and AT&T have each blocked the Google Wallet mobile payment system because they’re partners in the competing (and not very good) ISIS service. We’re really, really fucking this up. But we can fix it, I swear. We can do it. Go ahead, say it out loud. None. This is nonsense, of course.

On Chicago Public Schools Censoring Persepolis‘s Images of Torture | Sequart Research & Literacy Organization In the recent discussions over censorship of Persepolis in Chicago public schools, there’s been a notable lack of discussion over why anyone would want the book removed — and what such reasoning represents. The series of four black-and-white books, by Marjane Satrapi and originally published in French, were published in English in two volumes, which were collected as The Complete Persepolis (running 341 pages). The story is autobiographical, from Satrapi’s rebellious childhood in Iran to her departure from that country and growth into adulthood. It’s charming and somehow manages to feel like it’s not pulling any punches, including about the theocratic Iranian regime, while never feeling jaded. Suffice it to say, Persepolis is quite a work. Persepolis was adapted as a 2007 French animated film, written and directed by Satrapi and Vincent Paronnaud. Why would someone want to ban such a book? In 2009, parents tried to get both the book and movie banned in the Northshore school district.

Controlling the web (2012) In January 2012, two controversial pieces of legislation were making their way through the US Congress. SOPA, the Stop Online Piracy Act, and PIPA, the Protect Intellectual Property Act, were meant to crack down on the illegal sharing of digital media. The bills were drafted on request of the content industry, Hollywood studios and major record labels. The online community rose up against the US government to speak out against SOPA, and the anti-online piracy bill was effectively killed off after the largest online protest in US history. "One of the things we are seeing which is a by-product of the digital age is, frankly, it's much easier to steal and to profit from the hard work of others," says Michael O'Leary, the executive vice-president for global policy at the Motion Picture Association of America (MPAA). The US government says it must be able to fight against piracy and cyber attacks. Can and should the internet be controlled?

Yahoo wins court order to release records of its fight against PRISM Yahoo, initially vilified for being part of the PRISM program, which allows the National Security Agency (NSA) to tap it and other companies for users' information, is about to be vindicated. A court ruled Monday that the Department of Justice must reveal classified documents from 2008 that Yahoo says will demonstrate that the company fought back against a secret court order to reveal their users' data. "The Government shall conduct a declassification review of this Court's Memorandum Opinion of [Yahoo's case] and the legal briefs submitted by the parties to this Court," the ruling read. The Department of Justice has two weeks to estimate how long it'll take to declassify the documents and can still redact the parts it finds contains classified information. Ironically, it's the Foreign Intelligence Surveillance Act (FISA) Court that ruled for Yahoo. Yahoo, like all the companies named as part of PRISM, issued a denial that it knowingly aided in such a program.

Related:
Related:  The NSA and the Internet   -  US Society