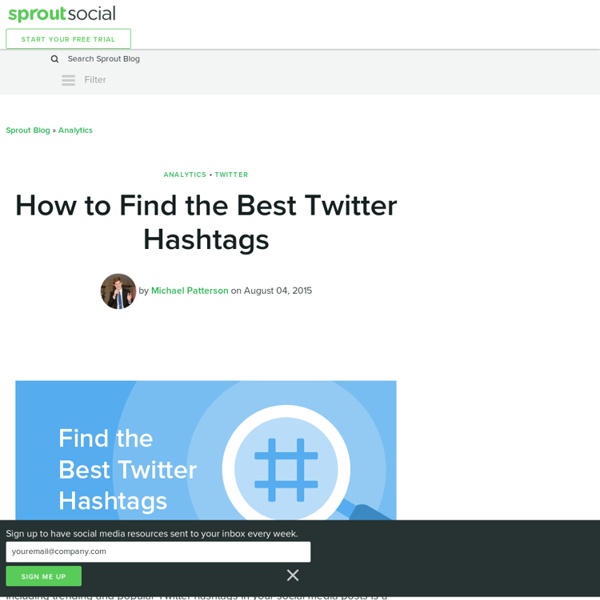 How to Track Twitter Hashtags Sometimes, you need to track hashtags, for example, if you want to see whether twitterers are mentioning your company, brand, or event. People talk about you and your company on Twitter, although probably not as much as they discuss celebrity deaths or charges of election tampering. The following websites enable you to track hashtags:

6 Ways Digital Learning is Changing Teaching Email Share December 1, 2011 - by Tom Vander Ark 0 Email Share Search 11,000,000+ hashtags Hashtag Audit Load/import tweet(s) for instant hashtag rating, optimization and re-scheduling. Hashtag Optimizer Tweet from the site, mobile apps or browser extensions and measure & refine the effectiveness of your hashtags. Hashtag Scanner 50 Brilliant Apps to Enhance Your Twitter Experience Without a doubt, Twitter is one of the best innovations of the century. It’s a simple idea coupled with a simple interface that took them to the stratosphere. But after a few years and millions of dollars in venture funding, Twitter’s simplicity isn’t what people are looking for anymore. New features are hard to come by, and whatever pushed out is just way too cosmetic. Right from the start, most of the innovation in the Twitter ecosystem has been coming from third party developers. They outsmart the Twitter team every step of the way.

27 Super Easy Tactics To Boost Your Twitter Strategy Twitter accounts for roughly 9% of all social media shares, about a tenth of the amount of activity on Facebook, according to analysis by BuzzSumo and Frac.tl . YET Twitter’s contribution to lead generation and sales—marketers’ key metrics—ranks last in terms of being the initial, final or only social media platform touched, because its content and interaction occur in the middle of the purchase funnel, based on AOL Platform research (Chart). This makes Twitter’s contribution difficult to track. Many marketers just set up a Twitter strategy and leave it on autopilot.

The Virtues of Video What if your struggling students could view demonstrations of difficult math concepts as often as necessary? Picture your students asking questions of an expert diver as she explores Australia's Great Barrier Reef. Or imagine a motivated student in a remote location attending an advanced placement physics class without leaving home. Providing such enriching learning activities, even with limited funds, is no fantasy; it's possible through live, interactive video. Much of what we define as education can now take place anywhere, anytime—and much of it can be acquired free through resources available over the Internet. Videoconferencing: Engaging Millenials

6 Tips to Boost Your Twitter Conversations Are you struggling to build an engaging Twitter community? Do you want to lead relevant conversations, but aren’t sure where to begin? Standard auto-tweets aren’t going to cut it. Your top priority should be creating helpful, authentic interactions. In this article I’ll tell you six ways you can start Twitter conversations and keep your followers’ attention. #1: Make Your Twitter Profile Inviting

5 Excellent Cloud Tools You Should Be Using It seems like everything is moving to the cloud from documents to photos to podcasts; plus more and more services are implementing cloud storage for security reasons. While 10 years ago you needed to have actual space on your computer or mobile device in order to save and access files, now you really don’t need much because free cloud storage is everywhere. Since there are so many new and useful cloud tools that are regularly popping up on the scene, I decided to share 5 that I feel are extremely beneficial to bloggers and social media users.

36 of Our Favorite #Education Hashtags - Getting Smart by Getting Smart Staff - edchat, edreform, EdTech Terry Heick at TeachThought recently published “The 20 Top #Hashtags in Education.” We liked it so much that we decided to compile our own list of favorites. (*Includes overlap from Heick’s list.) Priority Hashtags #EdChat*#EdTech*#DigLN#SmartSeries#EdPolicy#BlendedLearning#OnlineLearning#EdLeaders#STEM*#EduVC#HigherEd#EdReform A new way to optimize campaign performance with Twitter Ads Since we launched Twitter Ads in 2010, advertisers have used Promoted Tweets and Promoted Accounts to connect with an engaged audience at precisely the right moment. Over the last four years, we’ve analyzed thousands of Twitter Ads campaigns and identified best practices to help advertisers effectively achieve their marketing goals. Today, we’re excited to announce objective-based campaigns, reports and pricing.

Favorite Tweets of 2011 I would like to take a moment to thank all of the outstanding educators who are part of my PLN and invest in making me better each and every day. The 10 people who influence me the most and on a daily basis...... I have never met! As this year comes to a close, I wanted to take a moment to share my 5 favorite tweets of 2011 and a brief explanation as to why. How to Make Twitter In-Stream Images Stand Out Are you sharing pictures in your Twitter updates? Do you want to know how to make your pictures stand out on Twitter? Twitter’s in-stream preview images highlight your shared visual content, so make the most of them. In this article I’ll show you four ways to get your Twitter followers to pay attention to your pictures.

Google + - Another Tombstone for the Social Media Graveyard? MySpace, Bebo, Friendster, Google Wave, Google Buzz, Ping. All brand names that meant something once, some of which had tens of millions of users in the online social space, all have something else in common; they tried to be David to Facebook’s Goliath and came off worse. All of them brought something new to the online social space, a different way to interact with other members, a quirky feature or niche focus. All of them also went the way of the Dodo (barring a few clingy tumbleweeds), and most of those features have been aped by Facebook.