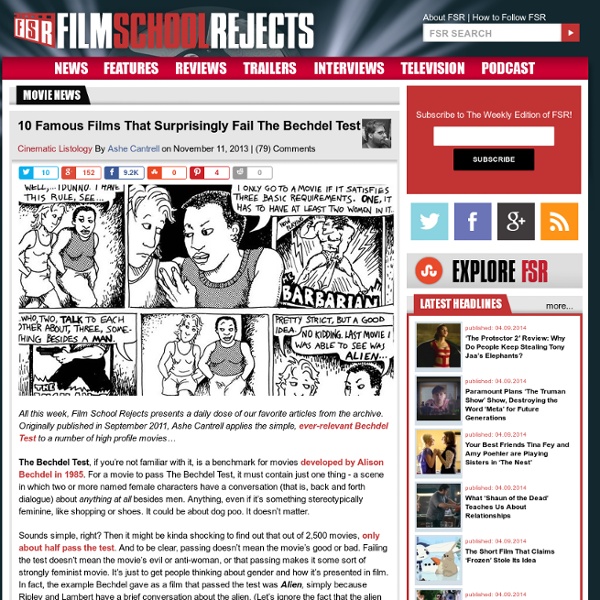 All this week, Film School Rejects presents a daily dose of our favorite articles from the archive. Originally published in September 2011, Ashe Cantrell applies the simple, ever-relevant Bechdel Test to a number of high profile movies… The Bechdel Test, if you’re not familiar with it, is a benchmark for movies developed by Alison Bechdel in 1985. For a movie to pass The Bechdel Test, it must contain just one thing - a scene in which two or more named female characters have a conversation (that is, back and forth dialogue) about anything at all besides men. Anything, even if it’s something stereotypically feminine, like shopping or shoes. It could be about dog poo. Sounds simple, right? But it’s still surprising to find out that some of the most popular films of all time fail the test, and often for reasons you may have never considered. 10.

Steven Soderbergh: State of Cinema First of all, is there a difference between cinema and movies? Yeah. If I were on Team America, I’d say “Fuck yeah!” [laughter] The simplest way that I can describe it is that a movie is something you see, and cinema is something that’s made. It has nothing to do with the captured medium, it doesn’t have anything to do with the where the screen is, if it’s in your bedroom, your iPad—it doesn’t even really have to be a movie: it could be a commercial, it could be something on YouTube. Cinema is a specificity of vision, it’s an approach in which everything matters.

Multiple Choice Zombie Apocalypse Survival Game You really aren't awake yet. You never are until at least your second cup of coffee, and this is only your first. You're having a hard time getting your eyes to focus. 15 Film Production Credits Explained Ever wonder what all those strange credits are when they roll by at the end of a film? I used to, until I moved to LA, where I started meeting Best Boys and Dolly Grips with their kids when I took my son to the playground—yes, Hollywood, where you meet Gaffers and Armourers at your average Saturday night house party. So I started asking questions, and here's what I've learned: 1.

65 Beautiful Fonts You Can Download For Free Freebie 65 Beautiful Fonts You Can Download For Free by Alex on Aug 9, 2012 • 9:43 am 17 Comments 6 Insane Coincidences You Won't Believe Actually Happened America's Freak Luck During the Battle of Midway The Battle of Midway may be remembered as one of the most spectacular naval battles in history and one of the huge turning points in the Pacific theater, but it started out as a pure clusterfuck for the Americans. Despite going into battle with most of Japan's game plan in their pocket thanks to American codebreakers/Bothan spies, the U.S. Navy had little to show for it in the early hours of June 4, 1942.

Quentin Tarantino Lists His Favorite Films Since 1992 Yup, we mentioned Quentin Tarantino last week, and we’re doing it again this week because Rosario has unearthed this nice clip. In six snappy minutes, Tarantino (director of Pulp Fiction, Reservoir Dog, Inglorious Basterds, etc) lists his favorites films made since 1992 — when he, himself, started making films. You’ll know some of these titles, but likely not others. Related Content: My Best Friend’s Birthday, Quentin Tarantino’s 1987 Debut Film Filmmaking Advice from Quentin Tarantino and Sam Raimi (NSFW)

Einstein's Puzzle # Copyright (C) 2004 Lauri Karttunen # # This program is free software; you can redistribute it and/or modify # it under the terms of GNU General Public License as published by # the Free Software Foundation; either version 2 of the License, or # (at your option) any later version. # This program is distributed in the hope that it will be useful, # but WITHOUT ANY WARRANTY; without even the implied warranty of # MERCHANTABILITY or FITNESS FOR A PARTICULAR PURPOSE. See the # GNU General Public License for more details. Einstein's Puzzle Variations of this riddle appear on the net from time to time. It is sometimes attributed to Albert Einstein and it is claimed that 98% of the people are incapable of solving it. Some commentators suggest that Einstein created such puzzles not to test out intelligence but to get rid of all the students who wanted him as an advisor.

Martin Scorsese's Film School: The 85 Films You Need To See To Know Anything About Film Interviewing Martin Scorsese is like taking a master class in film. Fast Company’s four-hour interview with the director for the December-January cover story was ostensibly about his career, and how he had been able to stay so creative through years of battling studios. But the Hugo director punctuated everything he said with references to movies: 85 of them, in fact, all listed below. Some of the movies he discussed (note: the descriptions for these are below in quotes, denoting his own words). Others he just mentioned (noted below with short plot descriptions and no quotes). But the cumulative total reflects a life lived entirely within the confines of movie making, from his days as a young asthmatic child watching a tiny screen in Queens, New York to today, when Scorsese is as productive as he’s ever been in his career–and more revered than ever by the industry that once regarded him as a troublesome outsider.

Early Movie Concept Art: See What Your Favorite Characters Could’ve Looked Like Just as with scripts, movie concept artists go through many a draft until they get the final approval for their character portrayals. Take Shrek for example. A recent photo posted to Reddit revealed that our favorite green ogre with a hero’s heart started out looking more like the star of ‘Coneheads.’ And Yoda, ‘Star Wars” supreme Jedi master, was originally depicted as a combination of hobbit and elf from the upcoming ‘Hobbit‘ trilogy.