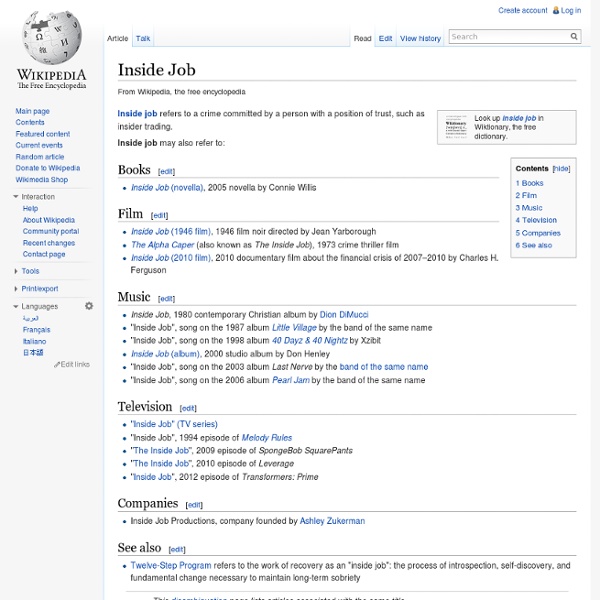 Inside job refers to a crime committed by a person with a position of trust, such as insider trading. Inside job may also refer to: Books[edit] Film[edit] Music[edit] Television[edit] Companies[edit] Inside Job Productions, company founded by Ashley Zukerman See also[edit] Twelve-Step Program refers to the work of recovery as an "inside job": the process of introspection, self-discovery, and fundamental change necessary to maintain long-term sobriety Related:  Movies Documentaries about Money

Jordan Belfort Early life Belfort was born in 1962 in the Bronx[3] borough of New York City to accountants Leah and Max Belfort, and was raised in Bayside, Queens[1][7][8][9][10] He is of Jewish descent.[11] Between completing high school and starting college, Belfort and his close childhood friend Elliot Loewenstern earned $20,000 selling Italian ice from Styrofoam coolers to people at a local beach.[12] Belfort planned on using the money earned with Loewenstern to pay for a dental-school qualification[13] and he enrolled in the Baltimore College of Dental Surgery; however, he left after the dean of the school said to him on his first day at the college: "The golden age of dentistry is over. If you’re here simply because you’re looking to make a lot of money, you’re in the wrong place. Career L.F. Stratton Oakmont Fraud At some point, Belfort came to be in control of the brokerage firm Stratton Oakmont. Stratton Oakmont fraud and conviction I got greedy ... Restitution Writing Film adaptation Personal life

The Wolf of Wall Street | Trailer & Official Movie Site | Coming Soon The Wolf of Wall Street (film) wikipedia Wolf of Wall Street may refer to: Wall Street (1987 The Wolf of Wall Street (2013 Inside Job (2010 An Oral History Of Trading Places Trading Places Trading Places is a 1983 American comedy film directed by John Landis, starring Dan Aykroyd and Eddie Murphy. It tells the story of an upper class commodities broker and a homeless street hustler whose lives cross paths when they are unknowingly made part of an elaborate bet. Ralph Bellamy, Don Ameche, Denholm Elliott, and Jamie Lee Curtis also star. The storyline is often called a modern take on Mark Twain's classic 19th century novel The Prince and the Pauper. Denholm Elliott and Jamie Lee Curtis won the awards for Best Actor in a Supporting Role and Best Actress in a Supporting Role, respectively, at the 37th British Academy Film Awards. The film was nominated for several additional awards including Best Motion Picture – Musical or Comedy at the 41st Golden Globe Awards. Plot[edit] Duke brothers Randolph and Mortimer own a successful commodities brokerage in Philadelphia. Winthorpe is framed as a thief and a drug dealer. Themes[edit] Cast[edit] Reception[edit] Box office[edit] Legacy[edit]