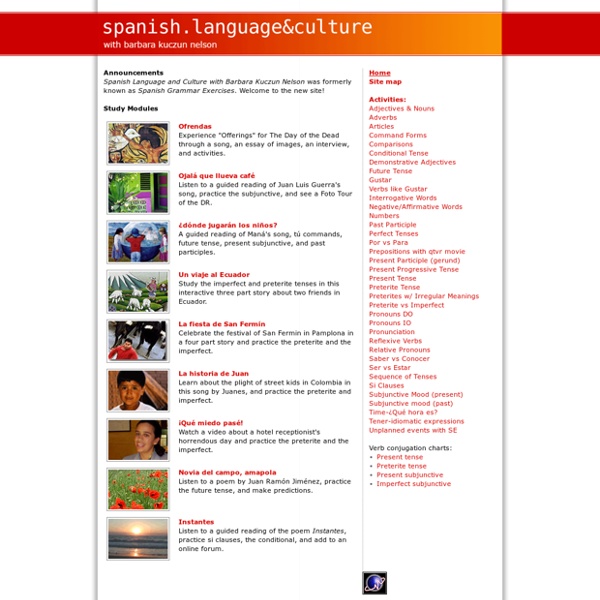 Spanish audio & transcripts Learn words / expressions and practice Spanish pronunciation This is a transcripts page for the free Spanish language audio prepared by the Spanish Language Project Team at the University of California. Having been created for Agricultural Labor Management, this basic level material includes "general interest audio tracks as well as Spanish vocabulary associated with agriculture", but you will find the majority of it useful for improving your pronunciation and listening comprehension even if you do not manage agricultural labor :-). The format is mostly the following: the word or expression spoken in English, then repeated twice in Spanish. Please note that the audio files are up to 7 Mb in size, so the built-in player may need a bit of time after clicking "play" to load the one you'd like to listen to. If you encounter any technical problem or a mistake in the transcripts, please send us a message through the feedback form.

Spanish Pronouns A Pronoun in Spanish as well as in English is like a shortcut to refer to a noun, a word that stands for or represents a noun or noun phrase, a pronoun is identified only in the context of the sentence in which they are used. So you must have a prior idea about who "he or she" "él or ella" is. In English we find "me, her, what, that, his", In Spanish they're used pretty much the same way, the main difference is that in Spanish most pronouns have a gender, masculine or feminine and rarely neuter to unknown objects or ideas. Notes in Spanish - Learn Spanish with Podcast Audio Conversation from Spain. Audio Player [Download MP3] After a pretty busy month Ben and Marina talk about ways to relax! How to Create the Best Summative Assessments for World Language According to #langchat participants, the best assessments are those that incorporate and prepare students for real-world language interaction. @cadamsf1 summarized the key point of last Thursday’s #langchat conversation simply: “Less is more with summative assessments so that kids use the language and have success!” Participants in the chat shared some interesting perspectives about how and when to do summative assessments. A number of great ideas were given about making summative assessments work to improve students’ communication and prepare them for real-world language exchanges.

Formal & Plural commands in Spanish The formal and commands are polite requests that you make of adults who are not close friends. This includes patients if you are a doctor (unless your patients are young children), clients for businessmen, even waiters since in most Hispanic countries you will not find a teenager bouncing over to your table with a "Hey! I'm Jim!" name-tag on. When in doubt, use the Ud. (usted) form unless you are invited to do otherwise. Spanish Articles Spanish Articles Learning the Spanish Articles is very important because its structure is used in every day conversation. The more you practice the subject, the closer you get to mastering the Spanish language. The Comprehensible Classroom It sounds like there are a lot of teachers out there that use Realidades and are looking for ways to incorporate TPRS and CI into it, beyond what the TPRS supplement suggests. I typed up this document for one such teacher, and I am sharing it here for anyone else who finds him or herself in the same situation. If you are a Realidades teacher, please visit the link below to the editable document and add in activities that YOU use in each chapter! The most important thing to remember, IMHO, is that you don’t need a fancy story or a clever activity to teach something with comprehensible input. CI is the most natural way to use language, because all you have to do is lead a conversation with your students that involves the words or grammatical structures that you are trying to teach. Get lots of repetitions, and your students will acquire the language!!

Amusing Spanish Idioms See also Spanish Slang, Spanish Words & Phrases An idiom is a phrase that is understood to have a meaning different from its literal meaning. For example, in English when we say “it’s raining cats and dogs” we mean it’s raining heavily, it’s a downpour. Like the cats and dogs example, idioms are fun, colorful expressions and the direct translation of an idiom from one language to another is often hilarious. Below are some of my favorite Spanish idioms. This is not an exhaustive list of Spanish idioms but rather a selection of amusing Spanish idioms that at one time or another caught my attention.