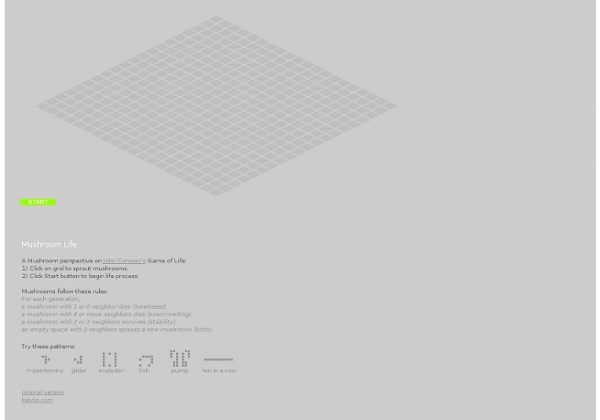 Otomata 16 Jul 2011 Click on the grid below to add cells, click on cells to change their direction, and press play to listen to your music. Update: Click here to get Otomata for your iPhone / iPod / iPad! Official facebook page: Also this reddit page has many examples: And there is a subreddit for Otomata:

100 Of The Best Free Online Flash Games Topics: 100 of The Most Popular Flash Games , Best Casual Games , Best Games of 2011 , Browser Games , Top Online Games Hey guys, I must have spent countless hours playing games this summer.. Through all the games I played and were recommended to me, I thought I would like to share a list with all of you. Still life: Bent objects UPDATE: The Return of Bent Objects Wires transform these objects from inanimate to hilarious works of art. Little polish girl The Kalachakra Mandala The Body Mandala is surrounded by crescent-shaped areas, which are the offering grounds. Next follow circles which represent the elements: earth (yellow), water (white), fire (pink/red), wind (gray/black) and space (green). The outermost circle is the "Great Protective Circle", "Mountain of Flames" or "Circle of Wisdom" which represents the wisdom element. The differently colored areas represent the five Wisdoms of the Buddha in the form of a rainbow.

Aleph Null: Color Music Jim Andrews: concept, programming, design Jan Odvárko: color-picker Thanks to Regina Célia Pinto, David Jhave Johnston, Ted Warnell, Maarten van Emden, Christine Wilks of JSArt, and the British and Irish Poets List--especially David Bircumshaw--for feedback during dev. Aleph Null is my first piece with the new HTML 5 canvas tag which requires no plugins and works in all modern browsers, including mobile phones. It's exciting to have such a canvas to work/play with in a public technology that is not at the mercy of a corporation's business plan or its continued existence. Free Racing, Simulation Games (Page 2) Dirchie Kart Dirchie Kart is one for fans of Mario Kart and other fun racing games. Clearly inspired by the Nintendo classic and other games of the 16-bit period, the player races against... Driving Speed 2 Driving Speed 2 is a racing simulation in which you can choose from four high powered V8 muscle cars and race against up to 11 computer controlled opponents on two circuits. Dude the Snowman

Lackadaisy Expressions Boy, I didn't know what I was getting myself into when I started this. I've had requests for some sort of expressions tutorial dating back a while now, so I figured, "Sure! I can explain expression drawing...and it'll be way better than all those tutorials out there that are nothing but charts of generic expressions. Yeah! Just give me a day or two to whip something up..." Art, The Golden Mean, and The Brain What do mathematicians, architects, sculptors, biologists, and graphic designers have in common? They all use what is perhaps the most interesting number in mathematics: the Golden Mean, also called the Golden Ratio and the Golden Section. Approximated as 1.618, the Golden Mean plays a prominent role in math, science, and art. Mathematicians know it as “phi” – the ratio between number pairs in the Fibonacci series.

Rectangle World – HTML5 Canvas and JavaScript: Tutorials and Experiments Making the Paper Snowflake Web App, Part 1 – Layering canvases Published on December 31, 2013 My first blog post explaining some of the code behind my Paper Snowflake web app. In this installment, we look at how multiple canvases are used together to handle drawing and interactivity tasks. Read more… Crazy Illustrations By Chow Hon Lam Chow Hon Lam is a t-shirt designer and a humorous illustrator from Malaysia. He has been completed this crazy project called Flying Mouse 365, which is create 1 design per day. I hope his illustrations can bring some smile and entertainment to the world. Hertz "Megahertz", "MHz", "Gigahertz" and "GHz" redirect here. Top to bottom: Lights flashing at frequenciesf = 0.5 Hz (hertz), 1.0 Hz and 2.0 Hz, i.e. at 0.5, 1.0 and 2.0 flashes per second, respectively. The time between each flash – the period T – is given by 1⁄f (the reciprocal of f‍), i.e. 2, 1 and 0.5 seconds, respectively. The hertz (symbol Hz) is the unit of frequency in the International System of Units (SI) and is defined as one cycle per second.[1] It is named for Heinrich Rudolf Hertz, the first person to provide conclusive proof of the existence of electromagnetic waves. One of the unit's most common uses is in the description of sine waves and musical tones, particularly those used in radio and other audio-related applications. It is also used to describe the speeds at which computers and other electronics are driven.

interaction design portfolio Narrative 2.0 visualises music. The music was segmented in single channels. The channels are shown fanlike and the lines move from the center away with the time. The angle of the line changes according to the frequency of the channel, while the frequency reaching a high level, the channel becomes highlighted by orange. 30 Bizarre and Creative Packaging Design Examples Inspiration November 1, 2010 One of the things that identifies the image of a product is its packaging. Few elements like striking graphics, attractive colors, and unusual shapes are carefully thought of to come up with packaging design that catches the attention of the consumers. A packaging design is a critical component in marketing because it is the packaging that makes it stand from the rest when consumers choose a product from the shelf. We usually see the packaging first instead of an innovative product.

Yamantaka Mandala - The Art of Asia - Buddhism (Overcoming Death Mandala) A mandala, or circle, is a representation of the Buddhist universe. These cosmograms represent in symbolic color, line, and geometric forms, all realms of existence and are used in Tantric meditation and initiation rites. The creation of a mandala, considered a consecrated area, is believed to benefit all beings. This is the Yamantaka mandala, a cosmic blueprint of the celestial palace of the deity Yamantaka, Conqueror of Death, who is represented at the center by the blue vajra, or thunderbolt.