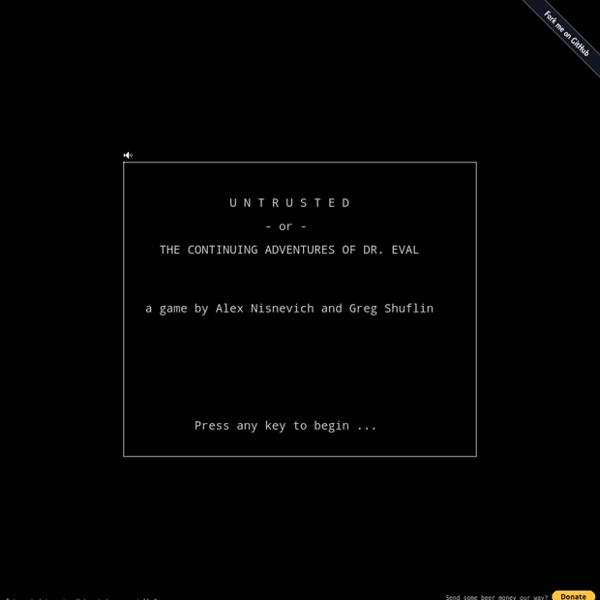 97 Things Every Programmer Should Know - O'Reilly Media Although I've written many, many lines of code, I've never worked in a 'world class programming shop'. After I had been programming for awhile, I sought a job in what I hoped would be such a shop: a place where things were done "right". Instead, I have always found myself in positions where creative people hack code and implement systems. And, some of those systems were high quality enterprise applications. I suspect, though, that my vision of a 'world class programming shop' may not really exist. There are places where protocols are developed and their use enforced and best practices identified and implemented. 97 Things Every Programmer Should Know: Collective Wisdom From the Experts is a collection of short essays addressing many, many facets of the application development process. Other essays convey useful advice such as having a coding standard and enforcing its use. In the 97 essays, nearly every aspect of the application development process is explored and described.

Code Monster from Crunchzilla <h2>Code Monster gets kids excited about programming. It is a combination of a game and tutorial where kids experiment with learning to code. <p> Code Monster use Javascript. Please enable Javascript if you want the play with the Code Monster. Otherwise, Code Monster will not be able to play with you. I'm Code Monster! Getting Started Lesson 1 BACK How to Play | Lesson Sections | About | FAQ | Terms of Use | Privacy | Contact | © 2015 How to Play Code Monster teaches kids and adults a little about Javascript programming! It's easy to play. Click on the Reset button if you really mess up your code and want to start over on a lesson. Code Monster saves what lesson you are on, so feel free to stop at any time and come back later. Have fun! About Code Monster from Crunchzilla is an interactive tutorial for kids that focuses on action. Projects start with simple boxes and colors, rapidly progressing into exciting experiments with simple animation and fractals. Frequently Asked Questions Sure!

Activité enfant pour apprendre à coder - Magic Makers About - Project Euler Rosetta Code linux - Getting root permissions on a file inside of vi Powerful Command Line Tools For Developers Advertisement Life as a Web developer can be hard when things start going wrong. The problem could be in any number of places. Is there a problem with the request you’re sending, is the problem with the response, is there a problem with a request in a third party library you’re using, is an external API failing? Good tools are invaluable in figuring out where problems lie, and can also help to prevent problems from occurring in the first place, or just help you to be more efficient in general. Command line tools are particularly useful because they lend themselves well to automation and scripting, where they can be combined and reused in all sorts of different ways. (Image credit: kolnikcollection)1 Curl Curl is a network transfer tool that’s very similar to Wget, the main difference being that by default Wget saves to a file, and curl outputs to the command line. $ curl ifconfig.me 93.96.141.93 The -L option is handy, and makes curl automatically follow redirects. Ngrep Netcat Sshuttle Siege

Recommended Reading for Developers Code Complete 2 Steve McConnell's Code Complete 2 is the Joy of Cooking for software developers. Reading it means that you enjoy your work, you're serious about what you do, and you want to keep improving. In Code Complete, Steve notes that the average programmer reads less than one technical book per year. The very act of reading this book already sets you apart from probably ninety percent of your fellow developers. I like this book so much that the title of this very website is derived from it – the examples of what not to do are tagged with the "Coding Horror" icon. The Mythical Man-Month: Essays on Software Engineering, Anniversary Edition (2nd Edition) Arguably the only classic book in our field. I challenge any developer to pick up a copy of The Mythical Man Month and not find this tale of a long-defunct OS, and the long-defunct team that developed it, startlingly relevant. Don't Make Me Think: A Common Sense Approach to Web Usability Er… yeah. Rapid Development Why?

The Architecture of Open Source Applications The Rise of ``Worse is Better'' Previous: Lisp's Apparent Failures Up: Lisp's Apparent Failures Next: Good Lisp Programming is Hard I and just about every designer of Common Lisp and CLOS has had extreme exposure to the MIT/Stanford style of design. The essence of this style can be captured by the phrase ``the right thing.'' To such a designer it is important to get all of the following characteristics right: Simplicity-the design must be simple, both in implementation and interface. I believe most people would agree that these are good characteristics. The worse-is-better philosophy is only slightly different: Simplicity-the design must be simple, both in implementation and interface. Early Unix and C are examples of the use of this school of design, and I will call the use of this design strategy the ``New Jersey approach.'' Let me start out by retelling a story that shows that the MIT/New-Jersey distinction is valid and that proponents of each philosophy actually believe their philosophy is better. rpg@lucid.com