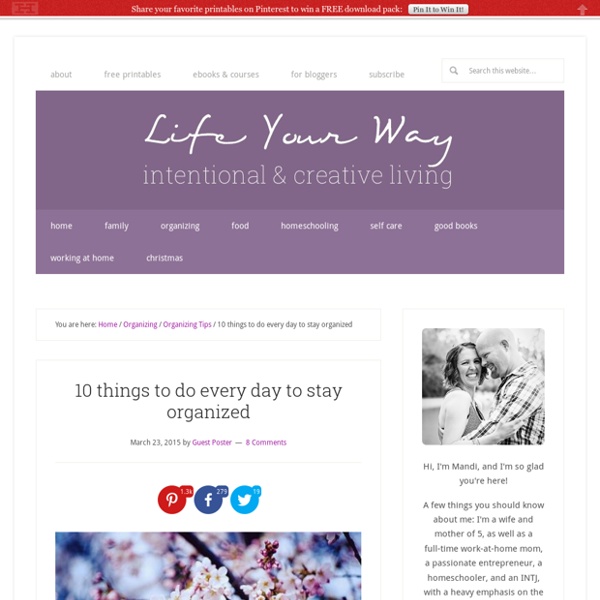 source: peter lee This post was originally published several years ago but continues to be one of our most popular. If you’re looking for simple, effective strategies to get organized, start here! The number one question I get from my readers is “help, I’m so overwhelmed with my home, where do I start?” Maybe you can relate? Sometimes it isn’t so much about starting with this pile here or that pile over there but more a matter of introducing a few daily organizational habits to help keep the clutter and chaos from becoming more than you can manage. Here are 10 things you can do today to help you stay organized. 1. Often chaos ensues because we are trying to juggle too many things in our brains. Grab yourself a notebook and just start brain dumping all that needs to be done. source: organizing junkie 2. Now take your list to your calendar (and if you don’t have a central family calendar, get one quick!) 3. You may not be menu planning for the whole week yet, but you can menu plan for TODAY.

DIY Wrapping Paper and Ribbon Organizer Kids have a way of springing things on you – it just comes with motherhood territory. Friday, my daughter announced to me that she was expected at the social event of the season. Okay, it was just another invitation to yet another kid’s birthday party, but it happened to be taking place that very afternoon. In the past, whenever these kinds of social events had arisen, I always found myself scrambling for wrapping paper and ribbon. I searched around online for a quality organizer, and even considered buying one like this, but most of the consumer reviews said it was junk. This project took about two hours total from start to finish over the course of two days, but now I have this great little wrapping paper organizer and I’ve maximized storage in a place I wasn’t using before- behind the laundry room door ! I was inspired by this image from Country Living, but I wanted to build a tall skinny version. So I did. Building This Simple Wrapping Paper & Ribbon Organizer That’s all folks.

Addiction and Zen A handbook for addicts and those in recovery, and their families. Foreword I warmly recommend Mary Heath's article on The Benefits of Zen Meditation in Addiction and Recovery. It shows a sensitive awareness and understanding of the difficulties that people face when they decide to come off drugs and gives a range of strategies for helping this process, ranging from traditional Zen work with the breath and mindfulness and walking meditation, to her own discoveries. Taken together these provide a kit from which people in recovery can choose. .......... About Zen Zen practice is about having time for yourself in a special way. One method of training comes down to us from Sakyamuni Buddha, who lived in the sixth century B.C. in Northern India. Despite its development in very different cultures, the essence of Zen practice remains vital and immediate, since it relies on personal encounter not on scriptures or dogma. Where and when to practice Zen Sitting meditation 1) Breath Counting Naming

Ingenious DIY Idea: How to Declutter a Desk or Workspace « Dornob It happens to the best of us: we get seduced by some sleek ultramodern furniture design and forget to factor in what it will look like when we add cables, cords and other peripherals that have become essential in this age of electronic and digital technology. This idea solves the problem from the other direction: rather than boasting an initially simple design, it relies on your actions after-the-fact to transform a messy desk into a brilliantly clean workspace. Van Mardian may have been the first to publicize this simple DIY desk organizing idea, but many people have since (and likely before) come to the same conclusion: a simple piece of composite pegboard mounted underneath a work surface makes it easy to use wire, zip ties or whatever other fasteners you may have handy and attach all your necessary-but-ugly essentials so they are not seen from above.

free buddhist audio : free mp3s and texts on buddhism, meditation and the arts Eight weeks to a better brain Participating in an eight-week mindfulness meditation program appears to make measurable changes in brain regions associated with memory, sense of self, empathy, and stress. In a study that will appear in the Jan. 30 issue of Psychiatry Research: Neuroimaging, a team led by Harvard-affiliated researchers at Massachusetts General Hospital (MGH) reported the results of their study, the first to document meditation-produced changes over time in the brain’s gray matter. “Although the practice of meditation is associated with a sense of peacefulness and physical relaxation, practitioners have long claimed that meditation also provides cognitive and psychological benefits that persist throughout the day,” says study senior author Sara Lazar of the MGH Psychiatric Neuroimaging Research Program and a Harvard Medical School instructor in psychology. Subscribe to the Daily Gazette Sign up for daily emails with the latest Harvard news.

BEGINNER'S GUIDE ... © 1995 Dharman Craig PressonAll Rights Reserved “Zen is not what you think!” -- anonymous Preface The purpose of this little book is to assure that all studentsunderstand the mechanics of Zen practice and the basic teachings ofBuddhism. Part 1: Practice Sitting, Breathing, Walking Seated meditation (J. zazen, Ch. The Sitting Posture (asana) There are several good postures for zazen: four cross-legged, onekneeling, and one using a straight chair or camp stool, as illustrated[Add illustrations of full lotus, half-lotus, sukhasana, Burmese, seiza,and chair sitting]. Breathing One may be given specific instructions by a teacher regarding theproper focus of awareness during zazen. Do not force or control the breath in any way. Walking (Kinhin) Walking meditation may be practiced between sessions of sitting.This relieves the legs of cramps and “pins and needles”, andallows one to begin the process of carrying one’s practice off thecushion and into daily activity. Part 2: Theory The Buddha The Dharma