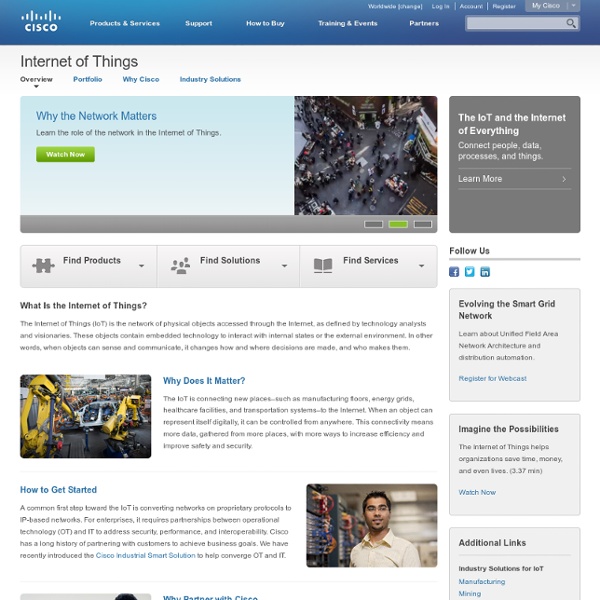 Internet of Things - Privacy and Security in a Connected World | Federal Trade Commission The Federal Trade Commission held a public workshop to explore consumer privacy and security issues posed by the growing connectivity of devices. The ability of everyday devices to communicate with each other and with people is becoming more prevalent and often is referred to as “The Internet of Things.” Connected devices can communicate with consumers, transmit data back to companies, and compile data for third parties such as researchers, health care providers, or even other consumers, who can measure how their product usage compares with that of their neighbors. The workshop brought together academics, business and industry representatives, and consumer advocacy groups to explore the security and privacy issues in this changing world. The workshop served to inform the Commission about the developments in this area. The workshop was held at the FTC’s satellite building conference center, located at 601 New Jersey Avenue, N.W., Washington, DC, and was free and open to the public.

What is Internet of Things (IoT)? - Definition from WhatIs.com The Internet of Things (IoT) is an environment in which objects, animals or people are provided with unique identifiers and the ability to transfer data over a network without requiring human-to-human or human-to-computer interaction. IoT has evolved from the convergence of wireless technologies, micro-electromechanical systems (MEMS) and the Internet. The concept may also be referred to as the Internet of Everything. In this Insider guide, InfoSec pros will learn about the risks related to the IoT and what they can do to mitigate them. A thing, in the Internet of Things, can be a person with a heart monitor implant, a farm animal with a biochip transponder, an automobile that has built-in sensors to alert the driver when tire pressure is low -- or any other natural or man-made object that can be assigned an IP address and provided with the ability to transfer data over a network. IPv6’s huge increase in address space is an important factor in the development of the Internet of Things.

Fujitsu and Microsoft collaborate to transform manufacturing processes through IoT innovation HANOVER, Germany and TOKYO, April 12, 2015 /PRNewswire/ -- At the Hannover Messe event, Fujitsu Limited and Microsoft Corp. announced their collaboration to bring innovative operational excellence to manufacturing with the help of Fujitsu devices powered by Windows 8.1 Pro, the Internet of Things (IoT) services of FUJITSU Cloud A5 for Microsoft Azure, and the Fujitsu IoT/M2M (machine-to-machine) platform. Having recognized a solution was needed to optimize processing by both machines and humans, Fujitsu brought together its Eco-Management Dashboard, the IoT/M2M platform, Microsoft cloud services and Windows tablets in a way that could enable managers, engineers and scientists to improve product quality, streamline systems and enhance functionality while reducing costs. This solution is based on the innovative work Fujitsu performed in Aizu-Wakamatsu, Japan. Fujitsu and Microsoft are on the leading edge of advancing the next generation of manufacturing. About Fujitsu About Microsoft

Join the Gatesense project | Gatesense During 29 and 30 November the first Gatesense Hackaton took place at Copenhagen Business School (CBS) facilities. We welcomed 30+ eager hackers and entrepreneurs from all over the world, including Germany, Denmark, Poland, China, USA and Holland and representing all profiles from hard core software developers to Elon Musk-like visionary entreprenours. Four Hackaton teams worked on: Generic Middleware of the Gatesense platformGatesense toolbox – Open Source plug-insDevelopment of a traffic app Building a Gatesense community worldwide and Gatesense business models After two days of intense sessions, the groups presented their result. The winning team won tickets to the week-long London Hackaton at IOT week in June 2014. As one of our participants noticed, this Hackaton was special because of the competing teams actually developing a co-opetition, a phenomena when cooperation and competition goes hand in hand to reach the desire outcome:

The Internet of Things In most organizations, information travels along familiar routes. Proprietary information is lodged in databases and analyzed in reports and then rises up the management chain. Information also originates externally—gathered from public sources, harvested from the Internet, or purchased from information suppliers. But the predictable pathways of information are changing: the physical world itself is becoming a type of information system. In what’s called the Internet of Things, sensors and actuators embedded in physical objects—from roadways to pacemakers—are linked through wired and wireless networks, often using the same Internet Protocol (IP) that connects the Internet. These networks churn out huge volumes of data that flow to computers for analysis. Pill-shaped microcameras already traverse the human digestive tract and send back thousands of images to pinpoint sources of illness. Podcast When virtual-world capabilities meet real-world businesses Exhibit Enlarge 1. 2. 3. 1. 2. 3.

We are building a UK network dedicated to the Internet of Things - Arqiva We are building and running a national Internet of Things (IoT) network, starting with 10 of the UK’s largest cities. To enable this we have partnered with SIGFOX, a pioneer in cost-effective, energy-efficient Internet of Things (IoT) connectivity.The new network, which will use SIGFOX technology and connect the UK to the SIGFOX global IoT network, will unlock substantial economic benefits and support innovative new services for smarter homes and cities. SIGFOX’s ultra-narrowband technology is particularly suited to connecting objects over long distances where a long battery life and low cost are required. By becoming the SIGFOX Network Operator in the UK, we have strengthened our position as a leading provider of machine-to-machine connectivity services. Our Managing Director of Smart Metering and Machine-to-Machine solutions, Wendy McMillan, said:“Arqiva has the unique breadth of capabilities needed to meet evolving machine-to-machine connectivity requirements across the UK.