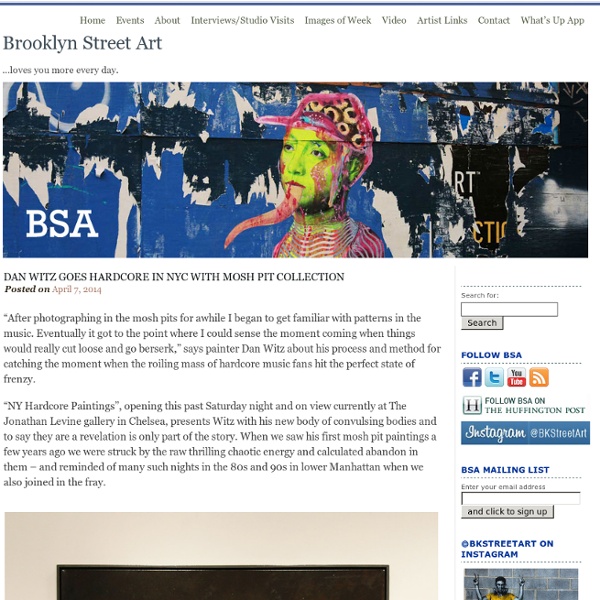 Posted on April 7, 2014 “After photographing in the mosh pits for awhile I began to get familiar with patterns in the music. Eventually it got to the point where I could sense the moment coming when things would really cut loose and go berserk,” says painter Dan Witz about his process and method for catching the moment when the roiling mass of hardcore music fans hit the perfect state of frenzy. “NY Hardcore Paintings”, opening this past Saturday night and on view currently at The Jonathan Levine gallery in Chelsea, presents Witz with his new body of convulsing bodies and to say they are a revelation is only part of the story. When we saw his first mosh pit paintings a few years ago we were struck by the raw thrilling chaotic energy and calculated abandon in them – and reminded of many such nights in the 80s and 90s in lower Manhattan when we also joined in the fray. Dan Witz “NY Hardcore” Jonathan LeVine Gallery (Photo © Jaime Rojo) Dan Witz “NY Hardcore” Jonathan LeVine Gallery. Swoon.

Past Exhibitions In the first commission to use the building’s iconic river façade, and the first major public museum display of street art in London, Tate Modern presents the work of six internationally acclaimed artists whose work is intricately linked to the urban environment: Blu from Bologna, Italy; the artist collective Faile from New York, USA; JR from Paris, France; Nunca and Os Gemeos, both from São Paulo, Brazil and Sixeart from Barcelona, Spain. You can also take the Street Art Walking Tour: an urban tour of site-specific art from a group of five Madrid-based street artists: 3TTMan, Spok, Nano 4814, El Tono and Nuria – a map will be available in the gallery. Various events will take place during the exhibition, including an interactive evening with experimental New York artists Graffiti Research Lab, refacing Tate Modern with graffiti light projections.

Accueil Play La Fouine est un gamer à l'ancienne. Plus à l'aise sur les jeux-vidéo de plateforme super facile avec 2 boutons et la direction. Un bon vieux Sonic semble faire l'affaire. 3D Graffiti Art from the Best Street Artists 10 of the World’s Best & Most Amazing 3D Street Artists Article by Urbanist, filed under Street Art & Graffiti in the Art category. 3D graffiti, whether it’s in chalk or paint, on walls or the street, represents a new way of combining the mastery of Renaissance art techniques with the gritty, ephemeral qualities of amazing street art. Blog Mexican Artist Smithe our latest mural at the Bushwick Art Park August, 2013 In collaboration with Mex in the City and All City Canvas for their ACCGSNYC event bridging NYC and Mexico the group brought Mexican Artist Smithe to paint the latest 200 ft mural at the Bushwick Art Park. His mural at the Bushwick Art Park was written about in the NY Times & NY Magazine. The mural took 2 weeks to complete and you can see photos of the entire process at All City Canvas's Google+ page. Below is the 200ftx20ft Mural at the Bushwick Art Park: Photo by Paula Villanueva.

Street art John Fekner: Broken Promises/Falsas Promesas, South Bronx, 1980. The terms "urban art", "guerrilla art", "post-graffiti" and "neo-graffiti" are also sometimes used when referring to artwork created in these contexts.[1] Traditional spray-painted graffiti artwork itself is often included in this category, excluding territorial graffiti or pure vandalism. Artists who choose the streets as their gallery are often doing so from a preference to communicate directly with the public at large, free from perceived confines of the formal art world.[2] Street artists sometimes present socially relevant content infused with esthetic value, to attract attention to a cause or as a form of "art provocation".[3]

U B U W E B : The Films of Guy Debord Guy Debord (1931-1994) Critique de la séparation (1961) Hurlements en faveur de Sade (1952) LDN. London Street Art, documented. There are many forms of diverse Street Art around London. Here is a small selection of some exemplary work found around the capital. Street Artists A-Z LDNGraffiti has had an overhaul and painstakingly searched the database to create a set of 'A-Z' listings of Street Artists found in and around London... Banksy vs Team Robbo - Updated: 23/02/2014

List of street artists From Wikipedia, the free encyclopedia This is a list of notable street artists. Africa[edit] News "Sailor" Mural: Timelapse Video Curated by Brooklyn Street Art, I did this at Espeis Outside Gallery in November. It's the largest stencil piece I've done to date, at 30' x 8'. Hope you enjoy the video. Worlds Top Six Amazing Street Artists If you're new here, you may want to sign up for email alerts or to subscribe to my RSS feed . Enjoy Life in the Fast Lane ! In an anti-establishment movement that’s taking the art world by storm, 6 of the world’s most famous Street Artists whose work is intricately connected to the urban environment were commissioned to paint the iconic river façade of Tate Modern exterior walls with 45 foot (15 meter) high towering artworks for the first major public museum display of Street Art in London. Work of Brazilian artist Nunca exhibited on the facade of the Tate Modern. Photo Getty The collaborative artists include Blu from Bologna, Italy, the artist collective Faile from New York, JR from Paris, France, Nunca and Os Gemeos, both from Sao Paulo, Brazil and Sixeart from Barcelona, Spain, but works of the ever-elusive Banksy was nowhere to be seen.