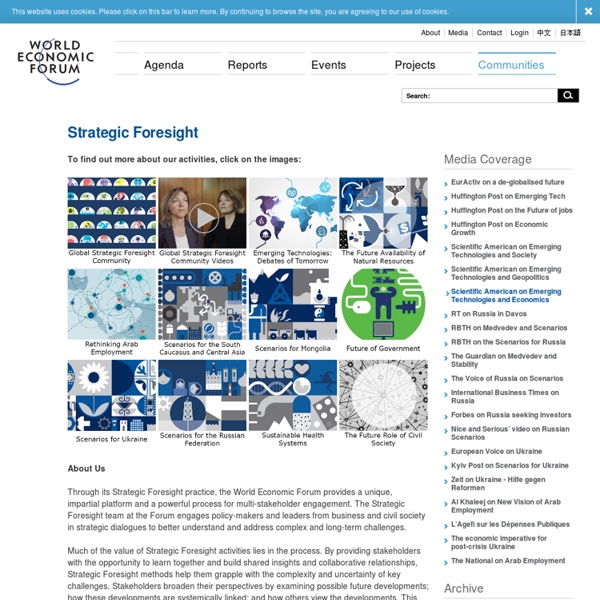 To find out more about our activities, click on the images: About Us Through its Strategic Foresight practice, the World Economic Forum provides a unique, impartial platform and a powerful process for multi-stakeholder engagement. The Strategic Foresight team at the Forum engages policy-makers and leaders from business and civil society in strategic dialogues to better understand and address complex and long-term challenges. Much of the value of Strategic Foresight activities lies in the process. The Forum has developed its own world-class methodology using a mixture of tools, including: Scenarios – Plausible, coherent stories about the future aimed at making sense of uncertain issues, and clarifying strategic options for decision-makers. Strategic Foresight processes are powerful when: There is little agreement among stakeholders about the nature of the issue No one is “in charge” of the issue Traditional thinking about an issue is outmoded For more of our reports and scenarios, click here Related:  Scanning sites • Finance and Innovation

2012 Edison Award Winners 2012 Edison Award Winners Being recognized with an Edison Award™ is one of the highest accolades a company can receive in the name of innovation and business success. The Edison Awards honor excellence in new product and service development, marketing, human-centered design and innovation. We congratulate all of our winners! Technology Systems Falcon 9 rocket and Dragon spacecraft by SpaceXSpaceX designed, manufactured and launched the Falcon rocket and Dragon spacecraft, the first ever private spacecraft successfully recovered from Earth orbit, all for a fraction of traditional costs. Safety/Security OnStar For My Vehicle (FMV) by OnStarThe power of OnStar is now available for most vehicles on the road through a new aftermarket product called OnStar FMV (For My Vehicle). Electric Vehicles 2012 Ford Focus Electric by Ford Motor CompanyThe all-new Focus Electric is Ford's first zero-CO2-emissions, gasoline-free, all-electric passenger car. Automotive/Transportation Building Materials

Investors, the EPA and now the SEC are making pollution an incre Photo credit Neubie A perfect storm consisting of the EPA, the Securities and Exchange Commission (SEC) and investors is pressuring companies to come clean on their environmental risks and performance. I wrote a post a couple of weeks ago about FaceBook’s decision to use a primarily coal-burning utility to power its new data center where I asked should FaceBook’s investors be worried about the decision. Now the SEC has started taking an interest in this area as well and recently clarified that companies’ have responsibilities [PDF] to report on: In announcing the clarification SEC Commissioner Luis A. The Commission’s action today is a first step in an area where the Commission will begin to play a more proactive role, consistent with our mandate under the National Environmental Policy Act of 1969, to consider the environment in our regulatory action. As Ceres notes: $8 trillion! UPDATE – A reader on the Energy Collective reminded me that I forgot to include reputational risks:

The Future of Government - Gov2020 The Rise of College Student Borrowing By Rebecca Hinze-Pifer and Richard Fry I. Overview Undergraduate college student borrowing has risen dramatically in recent years. Graduates who received a bachelor’s degree in 2008 borrowed 50% more (in inflation-adjusted dollars) than their counterparts who graduated in 1996, while graduates who earned an associate’s degree or undergraduate certificate in 2008 borrowed more than twice what their counterparts in 1996 had borrowed, according to a new analysis of National Center for Education Statistics data by the Pew Research Center’s Social & Demographic Trends project. Increased borrowing by college students has been driven by three trends: More college students are borrowing. Other key findings from the Pew Research analysis: About this Report The total loan amounts in this report are intended to capture the total debt students incurred for their degrees, from enrollment to graduation, so the analysis is limited to students who completed their degrees.

Eurasia Group It's 2013. We've made it. For those of us watching from the United States, the last few days of 2012 (to say nothing of the first couple of this year) were touch and go. Political risk has entered our vocabulary. That's been increasingly true for the last four years because of the way perceptions of political risk have spread across the developed world. In responding to the worst economic slowdown since the great depression, it's no surprise that political risk has come to the fore. When I started Eurasia Group in 1998, we focused on emerging markets. Indeed, it's more important now than ever before. And so the top risk this year is: 1 - Emerging markets: not less risky For the past four years, we've been uncritically thankful for the emerging markets. Emerging markets will have much more volatility and instability than the advanced industrial democracies. A - becoming developed. B - still emerging--and problematically so. C - backsliding. 2 - China vs information None of these are new.

Banking 2.0: Trends On April 2008 The Banker publishes and excellent article on the opportunities of on line banking. The Banker affirms that online banking is struggling to keep pace with web trends and losing the lucrative social networking market as a result. But some players could be on the verge of a breakthrough. Dr Thomas Meyer, an economist at Deutsche Bank Research in Frankfurt, has studied the impact of Web 2.0 technologies on the financial services industry and he notes that the new generation of online users (dubbed the ‘millennials’) form their loyalties at an ever-earlier stage. Wall Street-based consultancy Celent reported in its 2007 survey of US college students, that 60% of respondents said they would maintain their present banking relationship into their working lives –a 12% increase on the same survey in 2003. Infosys, found that several big names – including Wells Fargo, American Express, HSBC and AMEX – scored very highly on collaborative features and content. 1. 2.

World Politics Review | Geostrategic analysis of international affairs ASA Globalog :: Why don’t more people make their own money? Keith Hart Open Anthropology Cooperative What can anthropology offer someone who wants to understand money better? Most anthropologists don’t like money and they don’t have much of it. It symbolizes the world they have rejected for something more authentic elsewhere. “Capitalism comes to town and suddenly all that is solid melts into air. Modern anthropology had its origins in the democratic revolutions of the eighteenth century. We could, for example, show that the numbers on their financial statements, bills, receipts and transaction records constitute a way of summarizing their relations with society at a given time. Immanuel Kant produced the first systematic text in our discipline, Anthropology from a Pragmatic Point of View (1798). I first heard of LETS, a system for trading with its own money circuit, and its inventor Michael Linton in the mid-80s and later met him in Manchester. There is a lot more to this revolution than just banking. That’s all folks.

Bonuses for bankers, bankruptcy for public services | Richard Wolff So, now we know about the $15bn-plus 2010 pay package for Goldman Sachs partners and employees. The top rungs will get their many millions each, with lesser and lesser amounts going down the GS hierarchy. The mass of its more than 35,000 employees will, as usual, get much, much less than the top. In addition, the appreciation of Goldman's share prices likewise adds billions to employees who got stock options, which were likewise distributed very unequally throughout the firm. The unequal division of rewards within Goldman Sachs mirrors and mocks the far larger social divide it feeds. While vast wealth flows for the tops of finance, austerity is the watchword across the United States. US capitalism continues to dole out wealth for a few and austerity for the mass. Just like speculation in credit default swaps and "jumbo" mortgages for people without jumbo incomes, deepening economic divisions will prove unsustainable.

National Academies Keck Futures Initiative - About NAKFI - The Futures Initiative is designed to enable scientists from different disciplines to focus on new questions, upon which they can base entirely new research, and to encourage and reward outstanding communication between scientists as well as between the scientific enterprise and the public. The following information may be helpful in suggesting topics, specific instructions for which are provided below. Futures Conferences Futures Conferences are unique, bringing together some of the nation's best and brightest researchers from academic, industrial, and government laboratories to explore and discover interdisciplinary connections in important areas of cutting-edge research. Each year, researchers apply to attend the conference and some 100 outstanding researchers are invited to discuss ideas related to a single cross-disciplinary theme. Participants gain not only a wider perspective on the theme, but also new insights and techniques that might be applied to their own work.