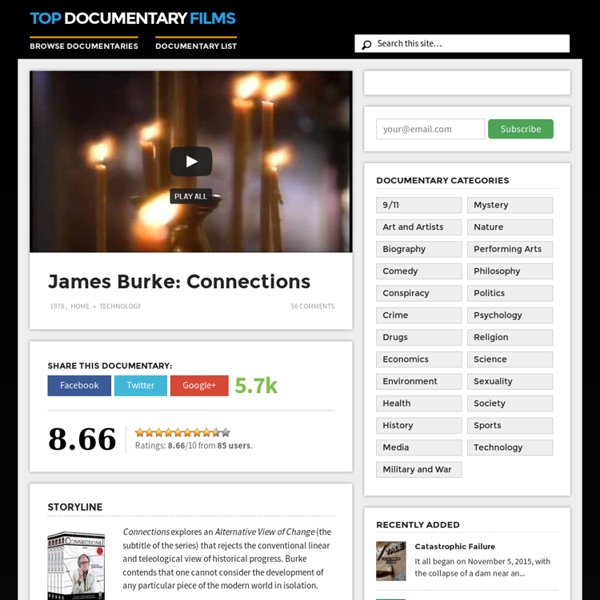 Connections explores an Alternative View of Change (the subtitle of the series) that rejects the conventional linear and teleological view of historical progress. Burke contends that one cannot consider the development of any particular piece of the modern world in isolation. Rather, the entire gestalt of the modern world is the result of a web of interconnected events, each one consisting of a person or group acting for reasons of their own (e.g., profit, curiosity, religious) motivations with no concept of the final, modern result of what either their or their contemporaries' actions finally led to. To demonstrate this view, Burke begins each episode with a particular event or innovation in the past (usually Ancient or Medieval times) and traces the path from that event through a series of seemingly unrelated connections to a fundamental and essential aspect of the modern world. Connections (1978) 1. 2. 3. 4. 5. 6. 7. 8. 9. 10. Connections² (1994) 1. 2. 3. 4. 5. 6. 7. 8. 9. 10. 11. 12.

Brené Brown Early life and education[edit] Brown completed her Bachelor of Social Work (BSW) at University of Texas at Austin, followed by a Master of Social Work (MSW) and Ph.D. from the Graduate College of Social Work at the University of Houston.[4] Career[edit] Brown is the author of I Thought It Was Just Me (but it isn’t): Telling the Truth About Perfectionism, Inadequacy, and Power (Penguin/Gotham, 2007), The Gifts of Imperfection: Letting Go of Who We Think We Should Be and Embracing Who We Are (Hazelden, 2010), and Daring Greatly: How the Courage to Be Vulnerable Transforms the Way We Live, Love, Parent, and Lead by Brené Brown (Gotham, 2012). In March 2013, she appeared on Super Soul Sunday talking with Oprah Winfrey about her new book, Daring Greatly.[13] The title of the book comes from Theodore Roosevelt’s speech “Citizenship in a Republic,” which is also referred as "The Man in the Arena" speech, given at the Sorbonne in Paris, France, on April 23, 1910.[14] Honors and awards[edit] Talks

Quantum entangled batteries could be the perfect power source Two European theoretical physicists have shown that it may be possible to build a near-perfect, entangled quantum battery. In the future, such quantum batteries might power the tiniest of devices — or provide power storage that is much more efficient than state-of-the-art lithium-ion battery packs. To understand the concept of quantum batteries, we need to start (unsurprisingly) at a very low level. Today, most devices and machines that you interact with are governed by the rules of classical mechanics (Newton’s laws, friction, and so on). In recent years, as our ability to observe and manipulate quantum systems has grown — thanks to machines such as the Large Hadron Collider and scanning tunneling electron microscopes — physicists have started theorizing about devices and machines that use quantum mechanics, rather than classical. The increasing amount of energy that can be extracted from a quantum battery, as you increase the number of entangled copies.

NASA working on faster-than-light space travel, says warp drives are ‘plausible’ Trekkies rejoice: while real breakthroughs in warp drive design haven’t happened yet, we’re moving closer to making faster-than-light travel truly feasible. Researchers found that making adjustments to the design of a real-life warp drive first proposed by physicist Michael Alcubierre in 1994 significantly reduces the amount of energy required to power it. Alcubierre’s design called for an American football-shaped spacecraft with a flat ring attached to the ship. Space time would warp around it, accelerating the ship to as fast as 10 times the speed of light without the ship itself ever breaking the speed of light. This would make trips to local stars a relatively quick jaunt: a trip to Alpha Centauri — some four light years away from Earth — would take just shy of five months. Up until now, the biggest problem was that the Alcubierre warp drive required prohibitive amounts of energy to power it. Dr. Here’s the thing though: antimatter is horribly dangerous.