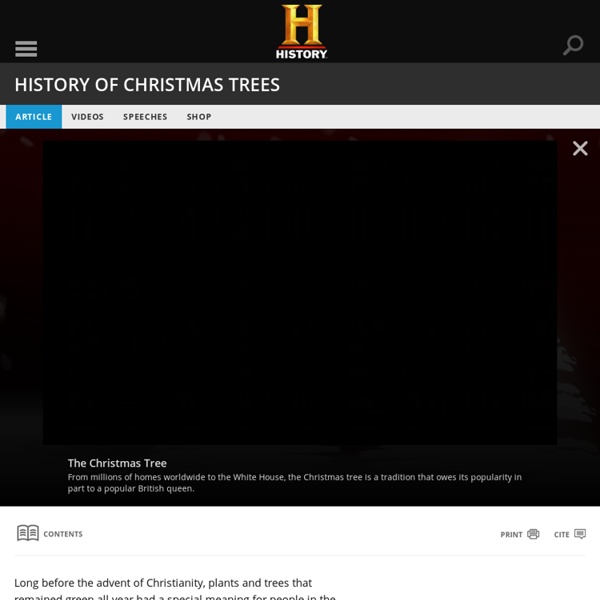 Canada German settlers migrated to Canada from the United States in the 1700s. They brought with them many of the things associated with Christmas we cherish today—Advent calendars, gingerbread houses, cookies—and Christmas trees. When Queen Victoria’s German husband, Prince Albert, put up a Christmas tree at Windsor Castle in 1848, the Christmas tree became a tradition throughout England, the United States, and Canada. Mexico In most Mexican homes the principal holiday adornment is el Nacimiento (Nativity scene). However, a decorated Christmas tree may be incorporated in the Nacimiento or set up elsewhere in the home. As purchase of a natural pine represents a luxury commodity to most Mexican families, the typical arbolito (little tree) is often an artificial one, a bare branch cut from a copal tree (Bursera microphylla) or some type of shrub collected from the countryside. Britain The Norway spruce is the traditional species used to decorate homes in Britain.

The Royal Roots of the American Christmas Tree The National Christmas Tree Association reports that Americans will purchase approximately 40 million Christmas trees this holiday season. While they are the centerpieces of yuletide celebrations today, Christmas trees have had a relatively short history in the United States—and you might be surprised by the person responsible for popularizing the holiday tradition in America. Rockefeller Center Christmas Tree (Getty) Long before the advent of Christmas—and even before the birth of Christ—ancient civilizations embraced evergreen boughs, wreaths and garlands as symbols of eternal life amid the darkest days of the winter solstice. From these pagan roots sprouted the modern Christmas tree. The first recorded display of a decorated Christmas tree has been traced to Riga, Latvia, in 1510, and the custom proliferated in 16th- and 17th-century Germany as Protestant elites bedecked their homes and guildhalls with pines and firs garnished with nuts, dates and apples.

The Father of Electric Christmas Tree Lights For centuries, revelers relied on wax candles to illuminate their Christmas trees. But when Edward Hibberd Johnson introduced electric Christmas tree lights in 1882, he not only added flash and color to a Yuletide tradition, he saved lives in the process. As Christmas approached in the waning days of 1882, Edward Hibberd Johnson joined his fellow New Yorkers in decking the halls. Then as now, Yuletide traditions ran deep, and the 36-year-old once again undertook the annual ritual of decorating the parlor of his Manhattan home with a majestic evergreen. For this particular Christmas season, however, Johnson decided to freshen the cherished holiday tradition with a state-of-the-art innovation—electric lights. Nearly three years had passed since Thomas Edison demonstrated the first practical light bulb, and few people were better acquainted with the emerging electrical technology than Johnson, the Wizard of Menlo Park’s trusted business associate.

Kwanzaa — History.com Articles, Video, Pictures and Facts The seven principles, or Nguzo Saba are a set of ideals created by Dr. Maulana Karenga. Each day of Kwanzaa emphasizes a different principle. Mazao, the crops (fruits, nuts, and vegetables) Symbolizes work and the basis of the holiday. It represents the historical foundation for Kwanzaa, the gathering of the people that is patterned after African harvest festivals in which joy, sharing, unity, and thanksgiving are the fruits of collective planning and work. Since the family is the basic social and economic center of every civilization, the celebration bonded family members, reaffirming their commitment and responsibility to each other. Mkeka: Place Mat The mkeka, made from straw or cloth, comes directly from Africa and expresses history, culture, and tradition. Vibunzi: Ear of Corn The stalk of corn represents fertility and symbolizes that through the reproduction of children, the future hopes of the family are brought to life.

Hanukkah — History.com Articles, Video, Pictures and Facts The events that inspired the Hanukkah holiday took place during a particularly turbulent phase of Jewish history. Around 200 B.C., Judea—also known as the Land of Israel—came under the control of Antiochus III, the Seleucid king of Syria, who allowed the Jews who lived there to continue practicing their religion. His son, Antiochus IV Epiphanes, proved less benevolent: Ancient sources recount that he outlawed the Jewish religion and ordered the Jews to worship Greek gods. In 168 B.C., his soldiers descended upon Jerusalem, massacring thousands of people and desecrating the city’s holy Second Temple by erecting an altar to Zeus and sacrificing pigs within its sacred walls. Led by the Jewish priest Mattathias and his five sons, a large-scale rebellion broke out against Antiochus and the Seleucid monarchy.