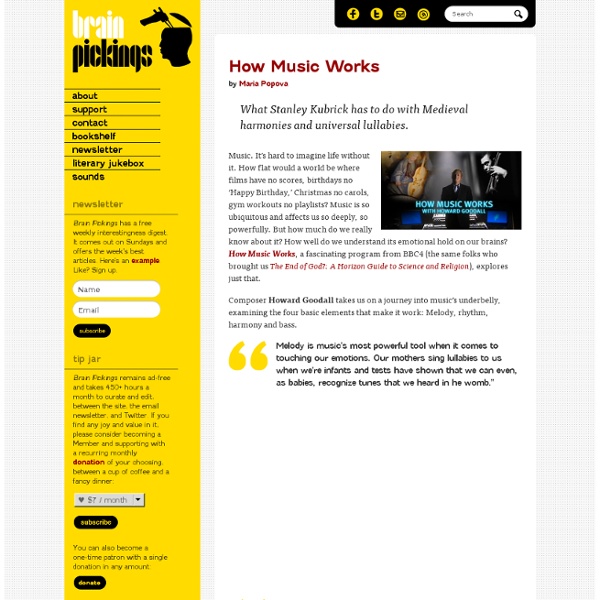 by Maria Popova What Stanley Kubrick has to do with Medieval harmonies and universal lullabies. Music. It’s hard to imagine life without it. How flat would a world be where films have no scores, birthdays no ‘Happy Birthday,’ Christmas no carols, gym workouts no playlists? Music is so ubiquitous and affects us so deeply, so powerfully. Composer Howard Goodall takes us on a journey into music’s underbelly, examining the four basic elements that make it work: Melody, rhythm, harmony and bass. Melody is music’s most powerful tool when it comes to touching our emotions. Every music system in the world shares these five notes in common. Catch the four remaining parts of Melody here: 2, 3, 4, 5. Rhythm is the part of music that interacts most immediately and spontaneously with our bodies. The rest of Rhythm here: 2, 3, 4, 5. Unlike rhythm and melody, harmony wasn’t part of music from the beginning. Harmony continues here: 2, 4, 5. The rest of Bass can be found here: 2, 3, 4, 5. Donating = Loving

Albertus Seba's Amazing Cabinet of Natural Curiosities by Kirstin Butler Getting a private viewing of the King Bird of Paradise, or how to set the exchange rate for flying squid. Lying at the intersection of art and science, the practice of natural illustration has long been the recipient of Brain Pickings adoration. So we swooned over the recent release of Cabinet of Natural Curiosities, a reproduction of the unequalled collection of Amsterdam apothecary Albertus Seba. Schillinger System The Schillinger System of Musical Composition, named after Joseph Schillinger, is a method of musical composition based on mathematical processes. It comprises theories of rhythm, harmony, melody, counterpoint, form, and semantics (emotional meaning, as in movie music). It offers a systematic and non-genre specific approach to music analysis and composition, a descriptive rather than prescriptive grammar of music. The Schillinger System might have served as a road map for many later developments in music theory and composition. Instead, it languished in relative obscurity.

Jazz: A Rare Record of a Cultural Revolution by Maria Popova Last winter, The Jazz Loft Project was one of readers’ favorites — a rare and fascinating look at the secret life of a New York loft, where some of the most iconic jazz musicians of the 1950s came to play at night. This season brings us a greater treasure still: Jazz — a humbly titled yet absolutely amazing retrospective of the work of legendary photographer Herman Leonard, who passed away a few weeks before the book was published. Leonard had been photographing jazz musicians since the 1950s and developed close friendships with greats like Dizzy Gillespie and Miles Davis, which gave him unique access to these innovators and their larger worlds beyond the stage. The book reveals a rare glimpse of the underbelly of a cultural revolution through stunning, luminous never-before-seen images of icons like Billie Holiday, Duke Ellington, Charlie Parker, Ella Fitzgerald and more.

The Chord Guide: Pt III – Chord Progressions Chord progressions are the canvas on which musicians paint their masterpieces, and it’s a canvas which is a piece of art in itself. A chord progression can be subtle and in the background or it can be blatant and up front; it can be simple and catchy, or it can be technical and complex, it can stay in one key or it can change like the seasons. In any of these cases a chord progression is what drives the song as it literally shapes the music that accompanies it. Ai Weiwei: Without Fear or Favour, a BBC Documentary by Maria Popova Exploring the role of art as an agent of change, or what 100 million porcelain seeds have to do with Twitter. Creative visionary, political activist and post-modern Renaissance man Ai Weiwei is China’s most widely known and politically vocal contemporary artist. His now-legendary Sunflower Seeds installation for the Tate Modern in October 2010, which took 2.5 years and 1,600 Chinese artisans to produce 100 million hand-crafted sunflower seeds from the finest Chinese porcelain, offered powerful commentary on consumerism, Chinese industry, human rights and collective labor. In February 2011, a 220-pound pile of the seeds sold for $559,394 at Sotheby’s in London.

Guides: How to Get Your Musical Creations Off Your DS With a lack of Export feature for most music software on the handheld, we show you how to preserve and share your masterpieces DS-owning music enthusiasts have quite a few tools at their disposal for composing their latest and greatest, laying down that melody that came out of nowhere for use later or just plain old messing around with bleeps and bloops. It’s great fun, but when you’ve spent a considerable amount of time on a piece in, say, Korg DS-10 or Rytmik, only to find yourself unable to get those tracks off your DS to share with others; well, that’s not a happy place to be.