Visually stunning math concepts which are easy to explain 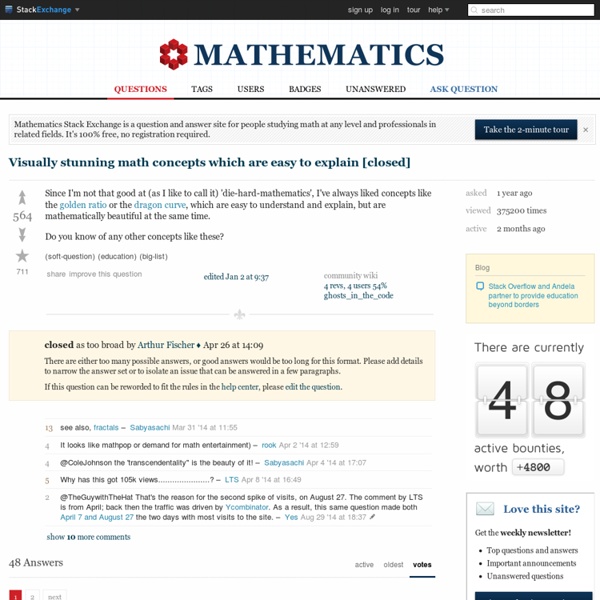 When I look up "area of a rhombus" on Google images, I find plenty of disappointing images like this one: which show the formula, but fail to show why the formula works. That's why I really appreciate this image instead: which, with a little bit of careful thought, illustrates why the product of the diagonals equals twice the area of the rhombus. EDIT: Some have mentioned in comments that that second diagram is more complicated than it needs to be. Something like this would work as well: My main objective is to offer students something that encourages them to think about why a formula works, not just what numbers to plug into an equation to get an answer. As a side note, the following story is not exactly "visually stunning," but it put an indelible imprint on my mind, and affected the way I teach today. No wonder that, when I ask my college students if they can tell me the formula for the volume of a pyramid, fewer than 5% can. She continued: "Three," he said.

Art, Mathematics, Music and the Physical Universe Art, Mathematics, Music and the Physical Universe B. L. Leonard Cohen on Creativity, Hard Work, and Why You Should Never Quit Before You Know What It Is You’re Quitting by Maria Popova “The cutting of the gem has to be finished before you can see whether it shines.” Canadian singer-songwriter, poet, and novelist Leonard Cohen (b. September 21, 1934) is among the most exhilarating creative spirits of the past century. Models help you understand why you disagree Models help you understand why you disagree In a blog post yesterday, I advocated very strongly that rather than simply bloviating about political (and other) topics, we should instead build mathematical models to clearly express our thinking. There was a lot of disagreement on this.

User:LucasVB/Gallery Below is a mostly comprehensive gallery of all images — illustrations, diagrams and animations — that I have created for Wikipedia over the years, some of which have been selected as featured pictures, or even picture of the day. As you'll probably notice, they're mostly related to physics and mathematics, which are my main areas of interest. If you have any comments, requests, suggestions or corrections, feel free to drop me a message on my talk page. But please, before making a suggestion, first take a look and see what sort of stuff I can do.

Predicting burglary patterns through math modeling of crime Pattern formation in physical, biological, and sociological systems has been studied for many years. Despite the fact that these subject areas are completely diverse, the mathematics that describes underlying patterns in these systems can be surprisingly similar. Mathematical tools can be used to study such systems and predict their patterns. One area where the study of pattern formation has been of growing interest is in crime modeling. It has been observed that criminal activity tends to cluster in space and time in urban settings. Analyzing spatio-temporal patterns of urban crime using mathematical modeling can reveal hidden patterns in the process of criminal activity, and potentially help establish methods for prevention.

Clem Burke picks 10 essential drum albums With his irrepressible, effusive style of drumming, along with a crisp and cool fashion sense that includes one of rock's most envied barnets, Blondie sticksman Clem Burke has always stood out as an individualist. "I never subscribed to the notion of the drummer being the guy you never notice," he says. “I like drummers who are unique and have tons of personality. If that comes through in my own playing and how I present myself on stage, I get it from all the players I've studied."

Reinventing Explanation The Babylonian Map of the World is one of the world's oldest extant maps, dating to 600 BCE. It's a crude map, difficult to read at a glance, but fortunately an accompanying cuneiform text describes the features on the map, including Babylon, seven other cities, a canal, and a mountain: Modern maps are, of course, far better than this early map. 20 Personal Website Examples for Your Design Inspiration it’s important to make your online portfolio as impressive as you can. Portfolio websites can be used effectively for Personal Branding, Job Searches, most valuable Marketing Tools, and show off their awesome skills to stand out in this Tough Design Industry. Portfolio Sites are clean and minimal, there are a lot of possible design Styles and Approaches. In this article, we have collected 20 Personal Website Examples for Your Design Inspiration. Don’t forget to subscribe to our RSS or Follow us on Twitter if you want to keep track of our next post.

Demonstrating the importance of dynamical systems theory Two new papers demonstrate the successes of using bifurcation theory and dynamical systems approaches to solve biological puzzles. The articles appear online in the Journal of General Physiology on June 27. In companion papers, Akinori Noma and colleagues from Japan first present computer simulations of a model for bursting electrical activity in pancreatic beta cells, and then use bifurcation diagrams to analyze the behavior of the model. In his Commentary accompanying the articles, Arthur Sherman (National Institutes of Health) proposes that the methods demonstrated in these two papers have broader implications and demonstrate the increasingly important role of dynamical systems approaches in the field of biology. Mathematical modeling is an important tool in understanding complex cellular processes.