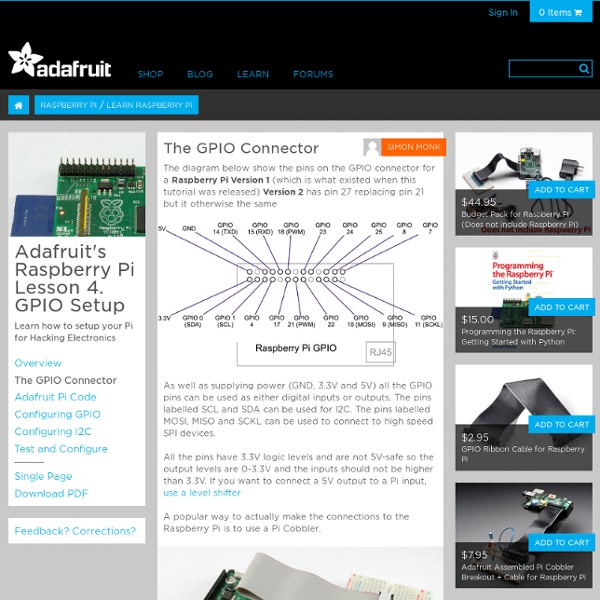 The diagram below show the pins on the GPIO connector for a Raspberry Pi Version 1 (which is what existed when this tutorial was released) Version 2 has pin 27 replacing pin 21 but it otherwise the same As well as supplying power (GND, 3.3V and 5V) all the GPIO pins can be used as either digital inputs or outputs. The pins labelled SCL and SDA can be used for I2C. All the pins have 3.3V logic levels and are not 5V-safe so the output levels are 0-3.3V and the inputs should not be higher than 3.3V. A popular way to actually make the connections to the Raspberry Pi is to use a Pi Cobbler. Make extra extra double-check sure that the PIN 1 indicator is in the corner of the Pi. This uses a ribbon cable to connect the GPIO connector to solderless breadboard, where you can add your own components. Related:  Configuración • gsxr007

le-raspberry-pi-3 in out How to Code Raspberry Pi to Tweet it's own Temperature - AW In this post we will be building up on the code that we had developed in the previous post on Tweepy. We will extend our basic code so as to extract the temp information from Pi & tweet it. We will then go a bit further & set up a scheduled task (Cron Job), which will run our code at regular intervals of time. Say for example , we can schedule it to run the code once in an hour so that we will get an update of the temp every hour. Enough of talk … Let’s do it. Step 1 : Building the Code bit by bit. Here is our previous code : #! First of all delete the last line, we will be making some changes. cmd = '/opt/vc/bin/vcgencmd measure_temp' line = os.popen(cmd).readline().strip() temp = line.split('=')[1].split("'")[0] Once we have extracted the temperature we can tweet it using the below command api.update_status('My Current Processor Temperature: '+ temp + ' C') Step 2 : Assembling the Final Code Let’s arrange all the bits and pieces together. #! Step 3 : Running the code Step 4 : Set up a Cron Job

Pins | Wiring Pi Pin numbering of the BCM2835 GPIO port(s) on the Raspberry Pi has been a source of great confusion since the designs for the Pi were first published. In the early days (even before hardware was available) the default usable GPIO pins were simply referred to by number as GPIO0 through GPIO7. Additionally there were pins for other purposes, SPI, I2C and serial. So when initially writing wiringPi, I chose to have the same default pin numbering scheme and numbered them from 0 upwards. However this has subsequently been viewed as “wrong” and several people have expressed concern about my numbering scheme, however I’ve stuck with it (as by then people were using wiringPi). and it’s proven its worth over the hardware board revisions where some pins changed their hardware definitions, however wiringPi was able to hide this from the user. The P5 connector is designed to have the header soldered on the underside of the board. For a printable version of these tables, click here.

Documentation - Raspberry Pi to Arduino shields connection bridge Article Index Go to Index1. The Shield. 8 Digital pins.Socket for wireless modules.RX/TX pins.i2C pins (SDA, SCL).SPI pins (SCK, MISO, MOSI, CS). Can be used also as GPIO.8 channel analog to digital converter.Switch to enable external power supply. Get the schematics here Get the Raspberry Pi to Arduino shields connection bridge here. Go to Index2. Go to Index3. There are currently two main Raspberry Pi board revisions.Raspberry Pi Revision 1.0Raspberry Pi Revision 2.0 There are slight differences between this two revisions, so a different version of the arduPi library should be used depending of which board revision are you using. In the revision 2.0 the main changes are: 2 mounting holes added2 pin “reset” header added. 3.1 Identifying your board revision Cooking hacks starter kits include the Revision 2.0 of the board. Revision 2.0 The easiest way to identify your board revision is to check if it has the 2 mounting holes . Revision 1.0 Go to Index4. 4.1 Using arduPi library: Show Code 0. 1. 2.

Raspberry Pi | Wiring | Pins Update: 14th May, 2013 wiringPi version 2 has been released and now has its own website ( to look after it. Most of the documentation on the projects site has been copied over to it the new site, but there may still be 1 or 2 pages that are still missing. I’d encourage you to use the new site if possible where there will be a forum and wiki. The following tables give the mapping of the Raspberry Pi GPIO Pins to the GPIO connector in relation to the pin numbers and the physical location on the connector. If using the connector pin numbering, then note that Pin 1 on the connector is the 3.3v supply. P1: The Main GPIO connector: Board Revisions: Please note the differences between board revisions 1 and 2 (R1 and R2 above) P5: The auxilliary GPIO connector present on Rev. 2 boards only: Note also that the P5 connector is designed to be used from the underside of the Pi – ie. you solder on the top of the Pi board to install the connector! Each side has three columns.

Install RPi.GPIO Python Library The RPi.GPIO Python library allows you to easily configure and read-write the input/output pins on the Pi’s GPIO header within a Python script. Thankfully this library is now including in the standard Raspbian image available from the Foundations Download Page. If you are using a fresh image you don’t need to install it but I’ve kept the instructions here in case you ever want to try a manually installation. Method 1 – Install from repository If the package exists in the Raspbian repository is can be installed using apt-get. sudo apt-get update Then attempt to install the RPi.GPIO package : sudo apt-get install rpi.gpio If it isn’t already installed it will be installed. Method 2 – Manual Installation The package is available from and the current version is 0.5.11 (February 2015). Step 1 – Download the library wget Step 2 – Extract the archive to a new folder cd RPi.GPIO-0.5.11

Arduino UNO Tutorial 7 - Piezo Beep Arduino UNO Tutorial 7 - Piezo Beep In this easy Arduino UNO tutorial, we are going to use a simple Piezo Transducer to create some beeps. Piezo Transducers are similar to speakers in that an applied voltage causes the piezo crystal to move and make a sound. In order to get a tone a square wave needs to be applied usually in the range 20Hz to 20kHz. Don't confuse piezo transducers with piezo sounders or piezo buzzers. These behave in the same way as buzzers and have a built in oscillator and are switched on by a d.c. signal voltage. We will use the PWM functionality of the Arduino to create a tone on the piezo transducer. Note: For this tutorial we will not use the Arduino function tone() as this has a number of restrictions Can only be used on one pin at one time Use of the tone() function will interfere with PWM output on pins 3 and 11 The tone() function should be used if you require a different frequency and/or you are not using PWM on pins 3 and 11

DomoRasPi bcm2835: C library for Broadcom BCM 2835 as used in Raspberry Pi This is a C library for Raspberry Pi (RPi). It provides access to GPIO and other IO functions on the Broadcom BCM 2835 chip, as used in the RaspberryPi, allowing access to the GPIO pins on the 26 pin IDE plug on the RPi board so you can control and interface with various external devices. It provides functions for reading digital inputs and setting digital outputs, using SPI and I2C, and for accessing the system timers. Pin event detection is supported by polling (interrupts are not supported). It is C++ compatible, and installs as a header file and non-shared library on any Linux-based distro (but clearly is no use except on Raspberry Pi or another board with BCM 2835). The version of the package that this documentation refers to can be downloaded from You can find the latest version at Several example programs are provided. Running as root Installation tar zxvf bcm2835-1.xx.tar.gz . make Reboot.

The life of Pi - clever ideas with a tiny computer 21 March 2013Last updated at 10:05 ET While the Chancellor was delivering his budget yesterday, I was in a room near Cambridge full of young people who may be part of the answer to Britain's economic future. They had all come up with clever ideas to use the Raspberry Pi, the ultra-cheap computer developed in Cambridge, and they were the finalists in a competition held by the technology advisors PA Consulting. I was one of the judges deciding who should win - and it was a tricky task. There was the London primary school with a plan to recycle old computer components to turn the Raspberry Pi into a communications device for schools in developing countries. Their only problem - they couldn't figure out how to make Skype work on the little device, But the winners combined great teamwork with excellent use of both the Raspberry Pi hardware and inventive programming. Dalriada School students with their winning entry “Start Quote End Quote Which if true, is a pity.