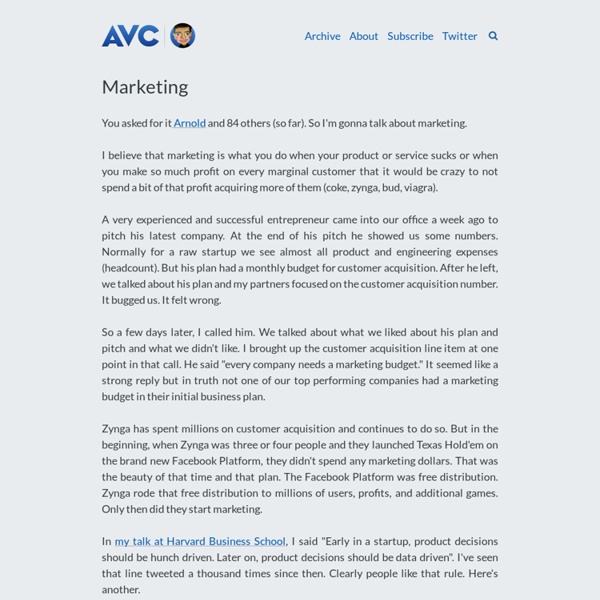 You asked for it Arnold and 84 others (so far). So I'm gonna talk about marketing. I believe that marketing is what you do when your product or service sucks or when you make so much profit on every marginal customer that it would be crazy to not spend a bit of that profit acquiring more of them (coke, zynga, bud, viagra). A very experienced and successful entrepreneur came into our office a week ago to pitch his latest company. At the end of his pitch he showed us some numbers. Normally for a raw startup we see almost all product and engineering expenses (headcount). So a few days later, I called him. Zynga has spent millions on customer acquisition and continues to do so. In my talk at Harvard Business School, I said "Early in a startup, product decisions should be hunch driven. Early in a startup you need to acquire your customers for free. So if you need to acquire customers for free early in a startup, how do you do that? 2) Social hoooks – Your product/service must be social.

Tips, Tools and Techniques for Marketers Around the Globe In Go Mobile, the book I’ve written with Jeanne Hopkins from HubSpot, we review a list of the 14 most powerful words in marketing so that readers can use them in their mobile marketing campaigns. This post gives you a sneak peak at the list that’s included in the book. Enjoy. Have you ever bought a product that you didn’t really need? You know the kind — they’re often found in the aisle displays at Lowe’s, WalMart or Barnes & Noble.

20 Expert Tips for Better Facebook Marketing If you've been reading our blog and other marketing blogs out there, hopefully you're convinced that setting up a Facebook Page can be beneficial to your business. With Facebook now amassing over 750 million active users, it's hard to deny that your prospects and current customers are using Facebook to connect with others and gather information to influence their purchasing decisions -- probably about the very products and services you offer! And if you haven't created a Page yet, what on earth are you waiting for? But creating your business Page is only the first step.

The Value of Email [Infographic] - ReadWriteCloud Last month we looked at why companies like Microsoft, Google and Facebook want your email. The post looked at a presentation by Jeff Hardy of SmarterTools, given at HostingCon 2011. Now the presentation is online and SmarterTools has come up with an infographic to summarize the relative size and value of email versus other communication modes. The gist is this: while Facebook, Twitter, and Google Plus all get tons of interest, email is quietly chugging away as the workhorse of the connected world. The four types of users you need to grow a community — Volley Works Over the past week, I spent some time trying to segment Volley’s user base. There is quite a bit of overlap between the segments, but I was able to identify the source of each member, and the impact of different types of users on the community’s growth. I narrowed it down to four types of users: early adopters, wait list, VIPs, and referrals. Even though these were generated from Volley’s user base, I’ve seen the same pattern in most successful communities.

Ocean Marketing: How to self-destruct your company with just a few measly emails [update] Update: A representative for the Avenger Controller (a new one, obviously) has released an official statement regarding Ocean Marketing’s involvement with their product and the actions of Paul Christoforo. Original story: Strap yourself in, you’re about to witness the most outlandlish PR blunder in video gaming history. And trust me, there have been many… From VentureBeat

Five guides to market anxiety News from globeandmail.com Five guides to market anxiety As financial markets gyrate, the echoes of 2008 are hard to ignore. But how do investors recognize when a market downturn is spiralling into another market crisis? By keeping an eye on signposts of impending disaster. Loyalty Marketing Part I: Strategies and Segments There seems to be a lot of confusion about loyalty marketing and how loyalty programs work. To an outside consumer, I guess the confusion is understandable. Most loyalty programs are branded as a value to the customer, a reward for their dedication. Most loyalty programs’ primary goals are not to add more value to consumers (though when they’re done well they do that too); their goal is to create more value for the company. I’ll break down how to think about loyalty if you are a business that is wondering if a loyalty program makes sense for you. The first thing to understand is that every business has a loyalty problem; it just might not be the loyalty problem they’re expecting.

Seven Myths About Transmedia Storytelling Debunked Over the past few years, transmedia storytelling has become a hot buzzword in Hollywood and Madison Avenue alike--"the next big thing" or "the last big thing" depending on whom you ask. Last year, the Producer's Guild announced a new job title, Transmedia Producer, a decision that has more or less established the term as an industry standard. More and more companies are laying claim to expertise in producing transmedia content. But many using the term don't really understand what they are saying. So let's look at what people are getting wrong about transmedia. Myth 1: Transmedia Storytelling refers to any strategy involving more than one media platform.

6 Social Media Pain Points (and What to Do About Them) — Online Collaboration You may love social media, but even the biggest fans of the social web will find some sources of frustration. What is your social media pain point? I thought I’d explore some of the main ones I’ve identified and offer up some potential solutions. 1. The 7 Ways Dropbox Hacked Growth to Become a $4 Billion Company Did you know Dropbox has spent very little on advertising, yet it is worth $4 billion? What have they done that’s made their business so successful? They’ve implemented many growth hacks that we’ll discuss in this article. What’s a growth hack? Instead of using traditional advertising to “buy” each new customer, it’s possible to use growth hacks to acquire customers in ways that scale. In other words, the cost of acquiring each additional customer is much closer to $0.

Instant Traffic Shortcuts Attention: Struggling Internet Marketers… Forget Expensive PPC Costs ... Imagine Wall-To-Wall Traffic Floods Of Laser-Targeted, Hungry Visitors Coming To YOUR Site From FREE Google Traffic... "Learned More on SEO And TrafficJust Mindblowing!..." Jit Uppalwww.MustHaveInternetMarketingTips.com From: Richard Legg If you've spent any time trying to build an online business, there's probably one thing that you've struggled with more than anything else ... The Future of Advertising will be Integrated This article originally appeared on TechCrunch. Banner Ads. They first started in 1994 and are therefore almost as old as the Web itself. They were very effective back then, with the original ad garnering a 78% click-through rate (CTR)! I guess from there we had nowhere to go but down.