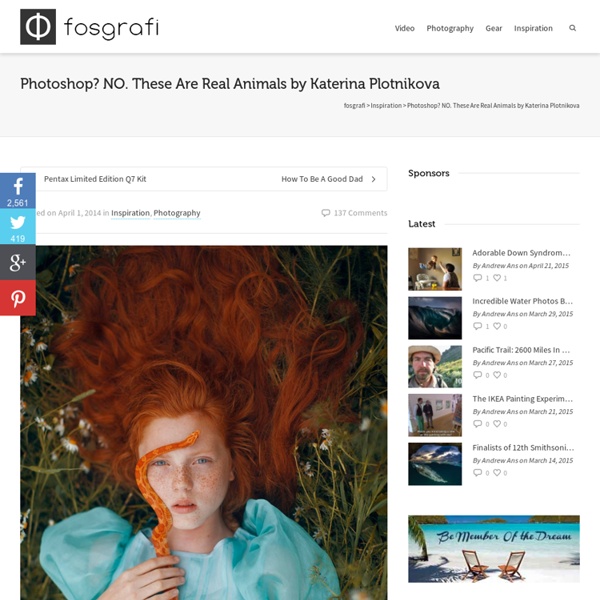 Katerina Plotnikova did something extremely amazing! She used no photoshop! All poses and animals are real!

America's Forgotten Pin-Up Girl Word of the day: Zaftig /zäftig/ adjective: (of a woman) Having a full, rounded figure; plump. Meet Hilda, the creation of illustrator Duane Bryers and pin-up art’s best kept secret. Voluptuous in all the right places, a little clumsy but not at all shy about her figure, Hilda was one of the only atypical plus-sized pin-up queens to grace the pages of American calendars from the 1950s up until the early 1980s, and achieved moderate notoriety in the 1960s. “She’s a creation out of my head. African Instagram model recreates famous campaigns starring Kendall Jenner and Gigi Hadid The modeling industry has come a long way when it comes to diversity, but as one African model has pointed out with a new photo series, it still has miles to go. Deddeh Howard, who grew up in Liberia and now lives in Los Angeles, didn't have an easy start when she tried to break into the modeling business. Several agencies told her 'thanks but no thanks', explaining that they already had enough black models on their rosters. To draw more attention to the need for diversity in the modeling and fashion industries, and call for visibility of black models, Deddeh recreated some of today's biggest designer campaigns, taking the place of stars like Gisele Bundchen, Kendall Jenner, Gigi Hadid, and Kate Moss.

Disturbing (But Amazing) Pictures Expose The Absurdities Of Modern Culture *Warning: Graphic Images* One of my first thoughts after coming across these illustrations was, “How have I never seen this artist’s work before?”, because they are freaking amazing. Too few artists today have the courage to tackle important social commentaries with their art. Ephemeral Portraits Cut from Layers of Wire Mesh by Seung Mo Park Using a process that could be the new definition of meticulous, Korean sculptor Seung Mo Park creates giant ephemeral portraits by cutting layer after layer of wire mesh. Each work begins with a photograph which is superimposed over layers of wire with a projector, then using a subtractive technique Park slowly snips away areas of mesh. Each piece is several inches thick as each plane that forms the final image is spaced a few finger widths apart, giving the portraits a certain depth and dimensionality that’s hard to convey in a photograph, but this video on YouTube shows it pretty well.

National Geographic's Antique Autochromes of Women In 1907, brothers Auguste and Louis Lumière developed the first commercially viable form of color photography. Their process, called autochrome, used glass plates coated with millions of microscopic color filters, each one consisting of—believe it or not—a dyed, powdered grain of potato starch. The starch grains essentially transformed the plate into a stained-glass window made of red, green, and blue dots, which filtered the light shining onto a light-sensitive emulsion. Up close, the resulting photographs looked like dots of various shades of red, blue, and green. 30 Challenges for 30 Days Did you know that it takes 30 days to form a new habit? The first few days are similar as to how you would imagine the birth of a new river. Full of enthusiasm it gushes forth, only to be met by strong obstacles.

The real life models for Classic Pin-Up paintings A series of comparisons between the classic pinup girls and photos that have served as models for achieving them;) via 10 Cool Painting Hacks - Painters of LouisvillePainters of Louisville After surfing the web I came across some really creative ideas for painting in your house: walls, floors, furniture, etc. I live under the mentality that if you don’t like something change it, and if you can’t afford it, make it. These clever hacks definitely fall under those categories. 1. Paint Your Laminated or Vinyl Floors Source 8 Vintage Pics Of Carrie Fisher Promoting “Return Of The Jedi” In 1983 You’re probably aware of the metal “Slave Leia” bikini even if you’re not a Star Wars fan. In 1983, Carrie Fisher brought it to light in “Return Of The Jedi.” The famous outfit also got a fair share of attention while the actress was promoting the movie with the Rolling Stone magazine beach shoot in the same year. There’re rumors that the famous costume could be “retired from the Star Wars IP for merchandise and marketing.” While they’re not confirmed yet, let’s have a look at these vintage photos!

Immortal Game Game animation General description[edit] Checkmate of the Immortal Game Visualizing Satellites and Space Debris tl;dr: if you're looking for a pretty widget showing positions of satellites and space junk, go here. Motivation On Friday, I read an article about an artist named Michael Najjar who's hoping to go into space on SpaceShipTwo in 2014. One of the pieces of art featured in that article was a visualization that looked pretty cool of the space debris encircling the planet. "Space debris" typically refers to pieces of defunct spacecraft (used-up rocket stages, dead satellites, etc.) floating above the earth.

Why Are Some Cultures More Individualistic Than Others? Photo AMERICANS and Europeans stand out from the rest of the world for our sense of ourselves as individuals. We like to think of ourselves as unique, autonomous, self-motivated, self-made. As the anthropologist Clifford Geertz observed, this is a peculiar idea. People in the rest of the world are more likely to understand themselves as interwoven with other people — as interdependent, not independent.