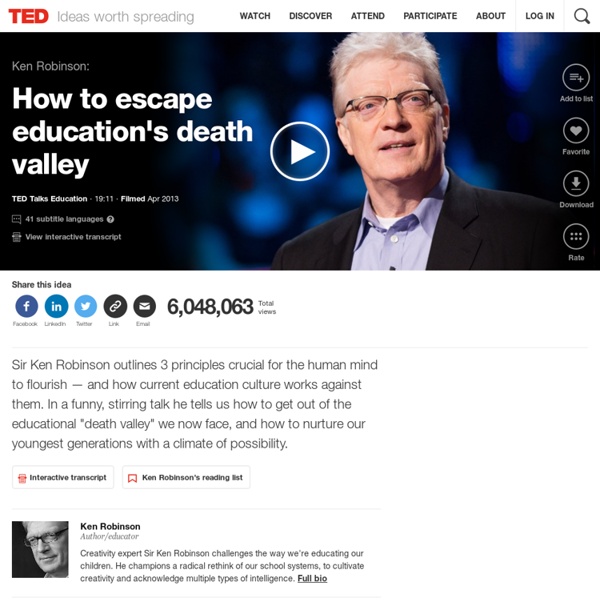 Ken Robinson: How to escape education's death valley Sir Ken Robinson outlines 3 principles crucial for the human mind to flourish — and how current education culture works against them. In a funny, stirring talk he tells us how to get out of the educational "death valley" we now face, and how to nurture our youngest generations with a climate of possibility. This talk was presented at an official TED conference, and was featured by our editors on the home page.

Innovative Learning Environments Innovative Learning Environments DOI: This report presents a wealth of international material and features a new framework for understanding innovative learning environments. This site is powered by Keepeek 360, Digital Asset Management for business. Linking Embedding What would a disruptive bank look like? A while back, I got into a to-and-fro on Twitter with Marc Andreessen and Chris Dixon about banking, which garnered a fair amount of interest and commentary1234, after Marc declared that he is “dying to fund a disruptive bank“. So far, finance startups have shied away getting their own banking licence, opting to use an existing bank instead. Movenbank and BankSimple talked up their plans to shake up banking but, in the end, both dropped “bank” from their name and partnered with CBW Bank and Bancorp respectively (Simple was subsequently acquired by BBVA). In effect, they built a presentation layer on top of an existing bank. I don’t think that’s the path to the future of banking.

Designing 21st century learning environments by Marco KoolsAnalyst, Innovation and Measuring Progress Division, Directorate for Education and Skills Innovation is a key element of today’s societies and economies, and that includes how we learn. Much has been written about innovation in education, but what does it really mean in practice in terms of content, organisation of learning, roles of teachers, etc.? How does one design a powerful learning environment that enables students to thrive in the 21st century? The just released OECD publication Innovative Learning Environments responds to these challenging questions.

China Tries Its Hand at Pre-Crime China’s effort to flush out threats to stability is expanding into an area that used to exist only in dystopian sci-fi: pre-crime. The Communist Party has directed one of the country’s largest state-run defense contractors, China Electronics Technology Group, to develop software to collate data on jobs, hobbies, consumption habits, and other behavior of ordinary citizens to predict terrorist acts before they occur. “It’s very crucial to examine the cause after an act of terror,” Wu Manqing, the chief engineer for the military contractor, told reporters at a conference in December. “But what is more important is to predict the upcoming activities.”

5 Ways Schools Can Make Learning Relevant for Students By Tanya Roscorla on November 10, 2014 Eric Sheninger talks about how to make learning work for students at TedxBurnsvilleED. Screenshot of the talk by Tanya Roscorla All too often, school is about what works for adults -- not about what works for students. America has locked up so many black people it has warped our sense of reality (Rachel Orr/The Washington Post; iStock) For as long as the government has kept track, the economic statistics have shown a troubling racial gap. Black people are twice as likely as white people to be out of work and looking for a job. This fact was as true in 1954 as it is today. Just Landed is Shutting Down Just Landed Is Shutting Down I’ve recently made the difficult decision to sunset and eventually shut down my company’s popular iOS travel app, Just Landed, which launched on the App Store in June 2012. As of today, Just Landed is no longer available for sale on the iTunes App Store, but will continue to operate normally for existing users. The servers powering Just Landed will shut down completely in just over 5 months time, on July 31st 2016, at which point the app will cease to function. I expect that this will be an unpopular decision, so as a courtesy to our users, I want to take this opportunity to explain the reasons behind the shutdown.