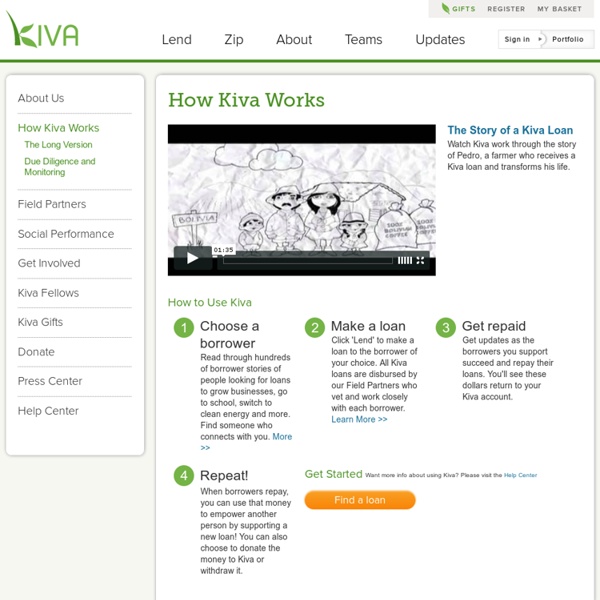 Tanzania > Tujijenge Tanzania Ltd September 11, 2011 As part of an ongoing effort to fully migrate risk ratings to our new and enhanced risk rating system, Kiva has conducted a re-assessment of the level of risk posed by this institution. During this re-assessment, our analysts were able to gather updated operational and financial information about the institution, as well as speak with key members of the staff. The information gathered during this process, together with the Kiva's new risk rating system and half-star support, has led us to revise Tujijenge Tanzania's risk rating from 4 to 3 stars. Tujijenge Tanzania has been informed of our analysts’ findings and their corresponding change in rating. Original Partner Description Tujijenge Tanzania is a micro-finance company limited by shares based in Dar es Salaam, Tanzania. Tujijenge Tanzania customers are both men and women who are actively engaged in small businesses such as cooked food, second-hand clothing, cereals, charcoal and other petty trade activities.

How to succeed in Silicon Valley without really trying (at all) | Alex Leo The narcissism and exclusiveness of the tech world is well-documented, well, everywhere. Whether it’s a startup co-founder writing a manifesto about his hatred of the homeless and of girls who “are obviously 4’s but behave like they’re 9’s” or a plush bus system in San Francisco only available to the tech elite, we as a group may not be the most sympathetic. This obliviousness also extends to our expectation that you know everything about the happenings of the tech scene, whether you work in it or not. So how can you make someone like my often tech-challenged father sound like he knows what he’s talking about in an industry conversation without actually having to care at all? You just need some canned, knowing responses to common subjects to turn into a tech-savvy version of Judy Holliday in Born Yesterday and shield you from the eye-rolls and smirks of the worst of us. Then there is the ubiquitous cocktail party question, “What do you think of [name of site]?”

Why Pret A Manger gives away so much free food to customers On the house, just because. (Chris Ratcliffe/Bloomberg News) People who don't eat regularly at popular lunch spot Pret A Manger probably don't realize one of the best perks of being a customer there: Employees are frequently giving away free food. Clive Schlee, the chief executive of London-based Pret A Manger, let everyone in on the secret this week. "We looked at loyalty cards but we didn't want to spend all that money building up some complicated Clubcard-style analysis," he told the London Evening Standard on Tuesday. Pret A Manger estimates that 28 percent of customers in the United Kingdom have been gifted something at some point. The idea of rewarding longtime patrons with free stuff has been around for a while, but Pret A Manger's program is pretty unusual, especially these days. "It's way more of a traditional approach than you see elsewhere," said Rajiv Lal, a professor at Harvard Business School who researches the retail sector. So how do you get in on the deal? Roberto A.

Has Net-a-Porter found the holy grail of 21st-century fashion? | Media Network Despite reports to the contrary, Net-a-Porter has not launched a new social network. Nor is it trying to recreate Instagram exclusively for fashion. What it has done, however, is announce a new and advanced way for its consumers to buy more clothes. How? Very exciting. At Ogilvy & Mather Advertising, the mantra is “we sell, or else”. Translated: if it moves, and you can consume on it (the new service has apps for mobile, tablet, and Apple Watch), we’ll try and sell to you through it – and why not? Net-a-Porter is a hugely successful business. If that merger is successful, it’ll put Net-a-Porter’s combined net revenue per annum at a staggering €1.3bn. But will it actually work? Rewind six or seven years, when Facebook was on the rise and MySpace was beginning to dwindle, you couldn’t move for brands wanting to start their own social network platform. The lesson then is the strategy of today: you go where your audience goes, not the other way around. On paper, this idea works.

Youth Self Employment Foundation - Who We Are Altemius Milinga, Executive Director and Co-Founder Altemius Millinga is an economist and entrepreneur with 20 years experience in microfinance and small enterprise development. Mr. Mr. Before joining at YOSEFO Mr. He is a founder and Board Member of the Mbinga Community Bank, a regulated regional bank.

Owen Paterson: Embrace GM or risk becoming 'museum of world farming' | Environment Europe is likely to become "the museum of world farming" because of its failure to embrace genetically modified crops, the environment secretary told farmers on Tuesday. Owen Paterson, a long-standing fan of biotechnology, warned the Oxford Farming Conference: "The longer Europe continues to close its doors to GM, the greater the risk that the rest of the world will bypass us altogether. "Europe risks becoming the museum of world farming as innovative companies make decisions to invest and develop new technologies in other markets." Paterson cited a study last June that found "compelling evidence" that GM crops could benefit farmers, consumers, the environment and the economy. A key test of the appetite for GM produce among EU member states will come this month, when there will be a vote on whether to allow cultivation of a variety of maize that has been made insect-resistant through genetic engineering. He did not go into detail on what forms of technology could be used in this regard.

Kiva Friends - Summary spreadsheet * "Kiva loan data" - Kiva's API seems to return the 16th of a month instead of the 1st as "Date First Repayment Due". Is there any apparent reason for this or do the engineers simply don't know or care that the Due Date has been shifted forward? Is that happening on all your loans, or only on the ones prior to Kiva changing to a 1st of the month due date? * "Loans" - The "Expected Paid Back" today seems to already include what is expected to be returned on the 15th of this month (or am I imagining things?). It looks like I haven't correctly handled the fact that there is now a period between the previous due date and the next "expected" repayment date. In the old days we would expect the repayments on the 15th of one month for amounts due on the 15th of the next month, so it was just a case of saying that everything that was due up to the next due date was currently "expected". Looks like v2.01 will have to come out soon.