The Stoic: 9 Principles to Help You Keep Calm in Chaos 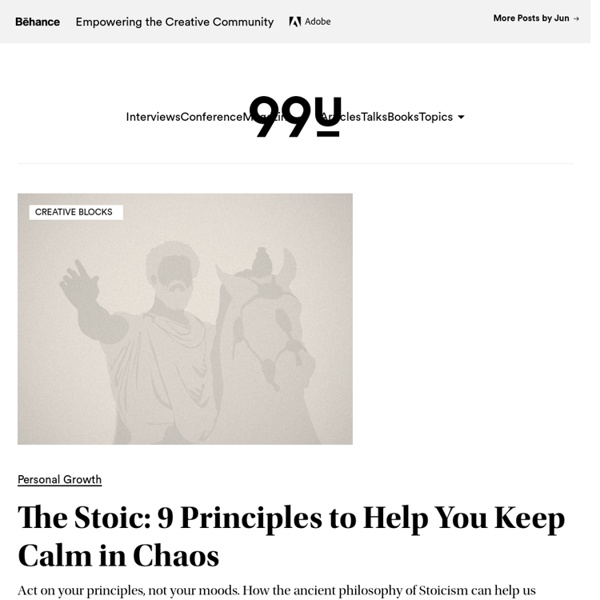 Observing individuals who lead a creative life, we can identify elements of expertise, grit, an understanding, and passion. What’s easy to overlook is the inner system within an individual—the set of principles that govern their mind and behavior. When failure ensues or the need to adapt is necessary, how does one respond? What do they tell themselves? In other words, what’s their philosophy? Not only does philosophy teach us how to live well and become better humans, but it can also aid in overcoming life’s trials and tribulations. The principles within Stoicism are, perhaps, the most relevant and practical sets of rules for entrepreneurs, writers, and artists of all kinds. How can we lead a fulfilling, happy life? It’s important that we understand the obstacles that we face and not run from them. Our guides to Stoicism today will be its three renowned leaders: Epictetus, Marcus Aurelius, and Seneca. Seneca was also a Roman Stoic philosopher, statesman, a tutor and advisor to Nero. 1. 2.

Related:  Self Help • Religous Study • Meditation • To Be Sorted 6

The Breathing Trick That Puts You to Sleep in Seconds Nothing is worse than lying awake at night, willing your brain to shut down so you can rest. Warm milk, lavender oil, and counting sheep — we’ve all tried them. But the new solution could be simply learning to breathe. Related: That Lemon Wedge’s Dirty Little Secret What is it? The 4-7-8 breathing technique was pioneered Dr. One Of The Three “Dharma Seals” That Buddha Taught & What The Human Race Can Learn From It A large part of the appeal of Buddhism for an increasing number of people today is its practicality, as it has a relative lack of extraneous philosophical fluff to sort through. Buddhism focuses on practical truths that we can use and which make immediate sense. One of the key teachings of the Buddha is that the origin of suffering (dukkha) lies in desire or grasping (tanha, which means literally “thirst”). The Great Discourse on the Wheel of Dharma (the Dhammacakkappavattana Sutta) contains a succinct statement on the second Noble Truth, which is the origin of this teaching: And this, monks, is the noble truth of the origination of stress: the craving that makes for further becoming — accompanied by passion and delight, relishing now here and now there — that is, craving for sensual pleasure, craving for becoming, craving for non-becoming. What Lies Beyond Space & Time?

9 Reasons to Try Mindful Walking Regular meditation is the foundation for mind-body wellness and a consciousness-based approach to life. The daily practice can improve quality of sleep and relationship skills, enhance concentration, reduce stress, and provide a deeper connection to spirit. However, daily meditation doesn’t have to mean sitting passively. Walking meditation, also known as mindful walking, is an active practice that requires you to be consciously aware and moving in the environment rather than sitting down with your eyes closed. Google to Developers: Here’s How to Stop Making Dumb Chatbots The search company is releasing the secret sauce it uses to make sense of ambiguous language. It could help developers build apps that actually understand us. Generally, computers are useless at holding a conversation. They just take things a bit too literally.

Research: Antidepressants Don't Work and May Make Depression Worse Alex Pietrowski, Staff WriterWaking Times [Editor’s Note: This article is about recent research on the chemical causes of depression and the use of SSRI antidepressants to address these causes. There are many other types of antidepressants available, and antidepressants, including SSRI’s, do help many people through depression. This research, and this article, simply highlight another perspective and another side of this important story, and should not be intended as medical advice for anyone.] At present, over 10% of people over the age of 12 in the United States take some type of antidepressant, and depression is the number one cause of medical disability in both the United States and Canada.

How To Open Your 7 Chakras – Explained By A Kid's Show It’s truly a strong indicator to me that our world is becoming more accepting of other cultures when certain philosophies and beliefs are featured front and center in programming aimed at kids. This time, it was the introduction of chakras in the Nickelodeon program Avatar: The Last Airbender. Your chakras are points of spiritual energy in your body that can open and closed depending on a number of factors. They can also be entirely too open. Spiritual balance requires that these chakras be correctly opened. Unlocking the brain's secrets using sound The brain is a reclusive organ. Neurons -- the cells that make up the brain, nerves, and spinal cord -- communicate with each other using electrical pulses known as action potentials, but their interactions are complicated and hard to understand. Just getting access to the brain itself is difficult: inserting devices through the skull into the brain requires surgery.

A Neural Network Playground Um, What Is a Neural Network? It’s a technique for building a computer program that learns from data. It is based very loosely on how we think the human brain works. First, a collection of software “neurons” are created and connected together, allowing them to send messages to each other.

10 Mind-Blowing Theories That Will Change Your Perception of the World Reality isn’t as plain and simple as we often like to think. Several things we take for granted as true are, in reality, patently false. Scientists and philosophers have done their best to overthrow the theories of common sense—as you’ll see by the ten examples below: Has this list opened your mind and stretched the possibilities of your perceptions? Kasim Khan - Team Spirit Article originally featured on Learning-Mind.com and inspired by ListVerse.com 3 Techniques to Help You Embrace Change People tend to be wary of change. We try to keep our daily routines consistent and predictable. A last-minute visitor or unexpected dinner plans can put us into a panic. Bigger changes such as a sudden or even planned change in jobs or move can send us into a tailspin. But they don’t have to. Certain personality types accept change more readily than others.

How I record my own conference presentations At this year's php[tek] conference, I decided to record my own sessions (one on a cluster of Raspberry Pis, and another on tips for successfully working from home). Over the years, I've tried a bunch of different methods of recording my own presentations, and I've settled on a pretty good method to get very clear audio and visuals, so I figured I'd document my method here in case you want to do the same. If you're looking for a great method of recording sessions at a camp, conference, etc., then this method isn't the most efficient—you'd instead want to purchase equipment that records one or two audio feeds, has easy start/stop support, uses removable media (so you can back things up throughout the day), and uses an HDMI-based video recorder (inline with the projector). A friend and excellent Drupal community member, Kevin Thull, has many blog posts devoted to his Camp Session Recording Kit, and his kit is very reliable, and probably the best way to do event-wide session recordings.