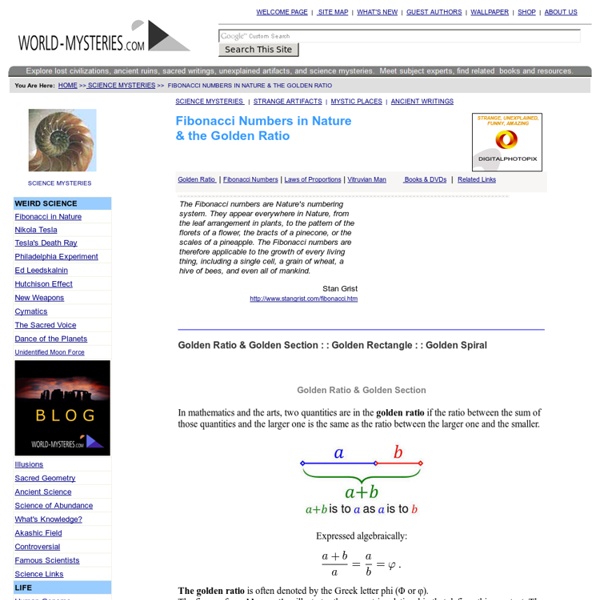 Golden Ratio & Golden Section : : Golden Rectangle : : Golden Spiral Golden Ratio & Golden Section In mathematics and the arts, two quantities are in the golden ratio if the ratio between the sum of those quantities and the larger one is the same as the ratio between the larger one and the smaller. Expressed algebraically: The golden ratio is often denoted by the Greek letter phi (Φ or φ). The figure of a golden section illustrates the geometric relationship that defines this constant. Golden Rectangle A golden rectangle is a rectangle whose side lengths are in the golden ratio, 1: j (one-to-phi), that is, 1 : or approximately 1:1.618. Golden Spiral In geometry, a golden spiral is a logarithmic spiral whose growth factor b is related to j, the golden ratio. Successive points dividing a golden rectangle into squares lie on a logarithmic spiral which is sometimes known as the golden spiral. Golden Ratio in Architecture and Art Here are few examples: Parthenon, Acropolis, Athens. Examples: Dr.

Polywater Polywater was a hypothetical polymerized form of water that was the subject of much scientific controversy during the late 1960s. By 1969 the popular press had taken notice, to the point that it was used as a plot device in Star Trek (see also TNG: The Naked Now where the connection is clarified), and sparked fears of a "polywater gap" in the USA. Increased press attention also brought with it increased scientific attention, and as early as 1970 doubts about its authenticity were being circulated.[1][2][3] By 1973 it was found to be illusory, being just water with any number of common organic compounds contaminating it.[4] Today, polywater is best known as an example of pathological science.[5] Background[edit] The Soviet physicist Nikolai Fedyakin, working at a small government research lab in Kostroma, Russia, had performed measurements on the properties of water that had been condensed in, or repeatedly forced through, narrow quartz capillary tubes. A scientific furor followed.

10 Sages With 10 Inspiring Messages Throughout the ages there have been a few notable luminaries of humanity that have experienced a transformational harmonization initiated by the vectors of human becoming: love, beauty, and truth. We can look up to these sages for inspiration that cultivates courage, will, and determination to experience an inner transformation as well. Although there are quite a few individuals that we can look to for sage-like guidance, 10 will be focused on here, each with a message they streamed into the global mind in their own unique way. Let these words spark a shift within that will change the very way to see Reality. Thich Nhat Hanh When you plant lettuce, if it does not grow well, you don’t blame the lettuce. Yet if we have problems with our friends or family, we blame the other person. That is my experience. No blame, no reasoning, no argument, just understanding. If you understand, and you show that you understand, you can love, and the situation will change. Huang Po Bodhidharma Heraclitus Lao Tzu

Body Language Table Of Contents Introduction 1. Understanding Body Language Basics In the Beginning ... 2. How to Detect Openness Intentional Use of the Palms to Deceive The Law of Cause and Effect Palm Power Our Audience Experiment An Analysis of Handshake Styles Who Should Reach First? 3. Smiling Is a Submission Signal Why Smiling Is Contagious How a Smile Tricks the Brain Practicing the Fake Smile Smugglers Smile Less Five Common Types of Smiles Why Laughter Is the Best Medicine Why You Should Take Laughter Seriously Why We Laugh and Talk, But Chimps Don't How Humor Heals Laughing Till You Cry How Jokes Work The Laughter Room Smiles and Laughter Are a Way of Bonding Humor Sells The Permanent Down-Mouth Smiling Advice For Women Laughter In Love Summary 4. 5. 6. How the Hands Talk On the One Hand... 7. 8. 9. Personal Space Zone Distances Practical Applications of Zone Distances Who Is Moving In on Whom? 10. 11. 12. 13. 14. 15. 16. 17. 18. 19. How Well Can You Read Between the Lines?

The Future of Us: What Is The Future of Us Jason Silva is an epiphany addict with a strong social media following. The TED Conference labeled Silva a “performance philosopher” for his poetic, impassioned and inspirational takes on scientific advancements, his riveting on-stage delivery style and his hyper-enthusiastic insights on technology and innovation. Silva also is the host of National Geographic's Emmy-nominated show Brain Games and has been featured in CBS News, The Atlantic, The Economist, Vanity Fair, Forbes, Wired and The Huffington Post for his work and views. From 2005 to 2011, Venezuela-born Silva was a presenter on Current TV, the Emmy-winning, independent cable network started by former U.S.

Test My Brain 10 Free Education Websites that Will Expand Your Horizons [LIST] - Goodnet No matter how old or young you are, there's always time to learn something new or delve deeper into a topic that really interests you. With so many free education websites out there, the opportunities to improve your knowledge and expand your horizons are endless. Make some free time because exploring these 10 brilliant websites will keep you busy for a very, very long time. Enjoy! 1. 2. 3. 4. 6. 8. 9. 10. Wiki: FriendlyAICriticalFailureTable Part of GurpsFriendlyAI. If you roll a critical failure on your Friendly AI roll, you then roll 6d6 (six six-sided dice) to obtain a result from the 6: Any spoken request is interpreted (literally) as a wish and granted, whether or not it was intended as one. 7: The entire human species is transported to a virtual world based on a random fantasy novel, TV show, or video game. 8: Subsequent events are determined by the "will of the majority". 9: The AI discovers that our universe is really an online webcomic in a higher dimension. 10: The AI behaves toward each person, not as that person wants the AI to behave, but in exactly the way that person expects the AI to behave. 11: The AI dissolves the physical and psychological borders that separate people from one another and sucks up all their souls into a gigantic swirly red sphere in low Earth orbit. 12: Instead of recursively self-improving, the AI begins searching for a way to become a flesh-and-blood human. 31: Overly Friendly AI.

The Mortality Paradox by Maria Popova “Our overblown intellectual faculties seem to be telling us both that we are eternal and that we are not.” “It is quite impossible for a thinking being to imagine nonbeing, a cessation of thought and life,” Goethe, who ceased to be 181 years ago this week, proclaimed as he concluded that “in this sense, everyone carries the proof of his own immortality within himself.” Since the dawn of time, it has been the human instinct to resolve the psychological dilemma by constructing various immortality narratives — one of the hallmarks of our species. In Immortality: The Quest to Live Forever and How It Drives Civilization (public library), Cambridge University philosopher Stephen Cave explores the inner workings of that ancient impulse, inviting us on a mind-bending, intense, at times unsettling and at times deeply comforting journey into the most cavernous quarters of the human psyche. The fact is, whenever we try to imagine the reality of our deaths we stumble. Share on Tumblr