Drawing Nature and Landscapes : How to Draw Nature Outdoors with Drawing Lessons Step by Step Techniques for Cartoons 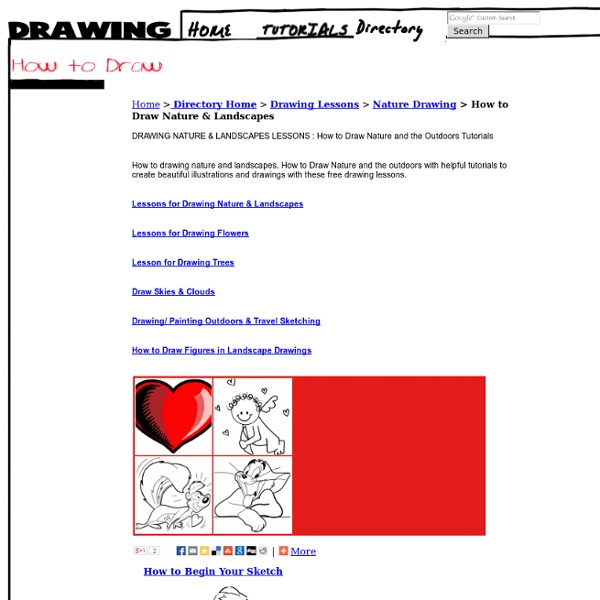 How to Begin Your Sketch In doing this sketch, doubtless great difficulty will be experienced in getting the drawing at all correct. Much assistance to this end can be obtained from a slight knowledge of Perspective This will form the subject of the next chapter. How to Draw From Nature with Easy to Remember Techniques Drawing from nature and landscapes with the following easy tips to follow with helpful tutorials to create beautiful illustrations and drawings with these free drawing lessons. Drawing Outdoor Objects: Water, Rock and Clouds A knowledge of the simpler technical principles involved in drawing clouds, water, and other natural features of the outdoors, is as essential to the newspaper artist as it is to the painter, in order to give naturalness to his pictures. A Tutorial for Sketching Landscapes - Outdoors Learn how to draw the great outdoors and landscapes with the this lesson on drawing landscapes outside. Drawing Grass : Use of Negative Drawing in Art Draw a Cartoon Valley

How to draw funny cartoons. Simple guide to improve your drawing skills. Zentangle® Hi All, I know this isn't watercolor, although I do combine it with watercolors sometimes, but I'm answering the question that was raised in this morning's "WASH" as to what zentangle® is. I've become a Certified Zentangle Teacher, or CZT, since I used to hang around here in WC and I just wanted to post this somewhere where those who asked the question as to what zentangle® is would see the answer. (My making anywhere near beginning of the "Daily Wash" thread is a rarity.) I imagine this would normally be posted in a "Mixed Media" forum. Yes, as someone said, and to put it simply, zentangle® is a meditative form of art using repetitive patterns. Tangles are basically done on 3.5" X 3.5" tiles with a micron pen, no artistic talent needed. And here is a zentangle® inspired piece of artwork, or as it's called in the tangling world, a ZIA, that I began by dropping watercolors onto Strathmore bristol paper. And a few done with a watercolor base on a zentangle® tile.

Watercolor Painting One of my favorite types of art is watercolor painting. Watercolors are a great way to introduce a child to painting -- they are fun and easy to clean up. It's also the media to try if you want to paint, but you have a limited amount of space or time. Easy to set up, interrupt, and pick up again, these paints provide a great deal of flexibility. Watercolors differ from other paints in that they are transparent. There is a large variety of supplies to choose from when beginning, but we’ll go through them so you can find the ones that will best fit your needs and budget. For example, you’ll find that cheap paper tears easily; too much rubbing or too much water can cause it to fall apart. Below is a list of what you will need to begin your own watercolor painting: Although there are many types of WATERCOLOR BRUSHES available, you will only need a few to start. That's it. Painting Clouds in Watercolor Using Liquid Frisket Creating With Line and Wash Monochromatic Color Schemes

How To Draw Anamorphic 3D Illusion Drawings The Italian artist Alessandro Diddi questions the point of view and the relevance of the look at things we can have through its anamorphose. From the point of view that one takes, sketches made ​​in pencil appear to be three dimensional. Some incredible trompe l’oeil to discover in images. DRAWING GRASS (Negative Drawing techniques)at MIKE SIBLEY FINE ART What do you see when you look at this picture on the right? Do you see an ancient black drinking cup? Maybe an ebony candlestick holder? These are the positive images. You can of course draw grass in any way you choose from "sketchy" (which serves its purpose here as this drawing is just 1½" high and the grass exists only to place the tractor in space)... ...to where it plays a full role as an integral part of the "reality" of the drawing. It confuses the rational element that tries to control the creative side. "The coconut shy principle" Pick up a ball, quickly turn around and throw it at a target the instant you see it. "The parking principle" Try slowly and carefully reversing a car into a tight parking space and you will often fail. DASH & REHASH v SLOW 'N STEADY I have two basic ways of working - both equally justifiable - "dash and rehash" and "slow 'n steady". Working quickly, more strokes have been added... ...the area is expanded... ...and in front to add depth. ...and more...

How to Draw Cartoons How to Draw Eyes: 25 Tutorials, Step-by-Steps, How-To’s and Reference Photos on How to Draw Human Eyes | Drawn in Black 9 Comments | August 11, 2011 Eyes… the window into the soul as they say. Below is a collection of resources on how to draw eyes to help you make sure your drawings have soul. Tutorials UPDATE 12/10/11: If you’re looking for even more eye drawing resources, check out this great Squidoo lens on how to draw eyes compiled by Martin Stankewitz! Figure Drawing For All It's Worth by Andrew Loomis (p. 176) Drawing the Human Head by Burne Hogarth (p. 37) Eye Drawing Tutorial by Brian Huey How to Draw Eyes by Stanislav Prokopenko Drawing the Human Eye on OnlyPencil How to Draw Eyes on DrawFurry How to Draw Eyes: The Male Eye by Cataclysm-X How to Draw Eyes by JR Dunster How to Draw a Realistic Eye by DorsY69 How to draw the femal eye on Instructables Female Eye by Faith Te Drawing Cartoon Eyes by Pete Emslie Cartoon Eye Reference Sheet Manga / Anime Eyes Drawing the Manga Eye by Archvermin on DeviantArt Tutorial: Create Unique Anime Eyes by Kikariz on DeviantArt Draw Female Anime Eyes Videos Photo References

4 Ways to Enhance Your Class with Google Hangouts If you are familiar with Google Tools, then you have probably heard of Google Hangouts or even used them yourself. Hangouts is Google’s video conferencing tool, and it’s an incredibly powerful way to engage with others. In addition to standard conference calls, Google Hangouts provide a broadcasting option called Hangouts on Air. This allows you to conduct your Hangout LIVE and record it to post on YouTube. You can participate in a Google Hangout from a web browser on your computer or use one of the free mobile apps for your Apple or Android device. If you would like a quick tutorial for how to use GHO, check out this great video from Google Gooru Google Hangouts can be a great tool for teachers to enhance their classes. Virtual Office Hours Students and teachers are busier than ever. Review Sessions Gearing up for midterms or finals, state tests, SATs, and APs, students are tested more than ever. Record Instructions For Later Playback Bring in a Guest Speaker

Japanese Packaging Templates - Best Used With Card Stock or Color Paper I’m not sure how I discovered this awesome collection of packaging templates but I’m glad I did! Some professor or student at a japanese univeresity was nice enough to share all their packaging templates with the world! These are a few of my favorites and you can see all of them on their website. Every situation is covered! You sell Bon Bons? They have a box for that! P.S. stumbleupon