Oculus Rift: Step Into the Game by Oculus 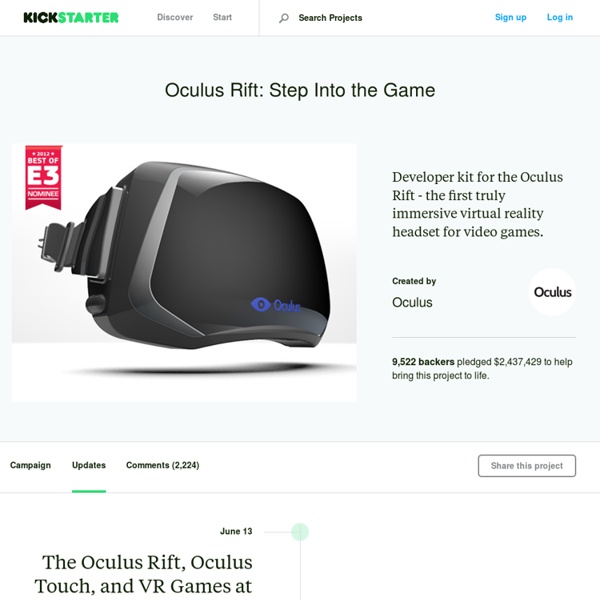 Z code Z Code (like Q Code and X Code) is a set of codes used in CW, TTY and RTTY radio communication. Actually, there are different sets of Z-codes: one originally developed by Cable & Wireless Ltd., for commercial communications in the early days of wire and radio communications, another one independently developed by NATO forces later for military needs and use. The NATO Z Code is still in use today, and is published in the unclassified document ACP-131. There are other set of codes internally used by Russia's military and other operating agencies. The old C&W Z Codes are not widely used today. FORM 1: An affordable, professional 3D printer by Formlabs Are you frustrated that low-end 3D printers don’t have the quality to make the true beauty of your designs real? Do you dream of having the power and resolution of a truly professional machine on your desktop? We’ve created an easy-to-use system that rivals the output of high-end printers at a fraction of the cost. Our reason for starting this project is simple: there are no low-cost 3D printers that meet the quality standards of the professional designer.

RoBo 3D Printer by RoBo 3D Printer 1) Unassembled Kit w/ ABS- $475+$99+shipping (locally or internationally) 2) If you already pledged for a kit and want to do a $99 ABS upgrade, just go to manage your pledge and add an additional $99 and we will be able to process it on our end. Thank you! Feel free to message us with any other questions and please, if you have not added shipping to your printer ($48 US, $70 international) then please go into manage your pledge and add the additional amount according to your location. Thank you so much backers! *Open source 3D printer that anyone can use, regardless of knowledge and skill level. Q code The Q code is a standardized collection of three-letter message encodings, also known as a brevity code, all of which start with the letter "Q", initially developed for commercial radiotelegraph communication, and later adopted by other radio services, especially amateur radio. Although Q codes were created when radio used Morse code exclusively, they continued to be employed after the introduction of voice transmissions. To avoid confusion, transmitter call signs are restricted; while an embedded three-letter Q sequence may occur (for instance when requested by an amateur radio station dedicated to low-power operation), no country is ever issued an ITU prefix starting with "Q". The codes in the range QAA–QNZ are reserved for aeronautical use; QOA–QQZ for maritime use and QRA–QUZ for all services. Early developments[edit] The following table reviews a sample of the all-services Q codes adopted by the 1912 Convention:

LuminAR bulb lights path to augmented reality (w/ video) (Phys.org)—Are we moving closer to a computer age where "touchscreen" is in the room, but it is the counter, desktop, wall, our new digital work areas? Are we moving into a new form factor called Anywhere? Do we understand how locked up we are in on-screen prisons, and that options will come?

Shrunk down an Arduino to the size of a finger-tip! by Open Source RF RFduino: A finger-tip sized, Arduino compatible, wireless enabled microcontroller, low cost enough to leave in all of your projects! The RFduino has Bluetooth 4.0 Low Energy built-in, which enables it to wirelessly talk to any smartphone that has Bluetooth 4.0. Currently we have several open source apps built for the iPhone which were used in our demos. Open source Android apps are next. The RFduino has a Nordic 32 bit ARM Cortex-M0 processor, so it has more power then the UNO, however it still runs the same, simple Arduino code the UNO runs, so there is no need to learn any new programming language or environment.

The Internet map The map of the Internet Like any other map, The Internet map is a scheme displaying objects’ relative position; but unlike real maps (e.g. the map of the Earth) or virtual maps (e.g. the map of Mordor), the objects shown on it are not aligned on a surface. Mathematically speaking, The Internet map is a bi-dimensional presentation of links between websites on the Internet. Every site is a circle on the map, and its size is determined by website traffic, the larger the amount of traffic, the bigger the circle. Users’ switching between websites forms links, and the stronger the link, the closer the websites tend to arrange themselves to each other. Charges and springs

Computer program can identify sketches (Phys.org)—Computers are good at speed, numbers, and massive amounts of data, but understanding the content of a simple drawing is more difficult. Researchers at Brown and the Technical University of Berlin have produced a computer application that can identify simple abstract sketches of objects almost as often (56 percent of the time) as human viewers (73 percent). First they took over chess. Then Jeopardy. Soon, computers could make the ideal partner in a game of Draw Something (or its forebear, Pictionary). Researchers from Brown University and the Technical University of Berlin have developed a computer program that can recognize sketches as they're drawn in real time.

Gigabot 3D Printing: This is Huge! by re:3D Share this project Done Share Tweet Thingternet My Nest article got me thinking about smart metering. In my head, smart metering is all about energy efficient homes constantly connected to utility companies, controlling all my appliances to minimise my energy use. The reality is a bit different A few hundred thousand UK homes have had smart meters installed so far. The full roll-out will start in 2014 and should be complete by 2019. The meters being rolled out in the UK use the mobile telephone network to send usage data back to your supplier. IGF announces shortlist for Best Student Game The 15th Independant Games Festival award shortlist already contains plenty of weird and wonderful indies. Now the IGF's organisers have announced their contenders for the best student game of last year. It's a strong list of quirky, experimental and mostly free games that are well worth trying. More importantly, a quick search shows that we haven't covered the excellent Zineth before.