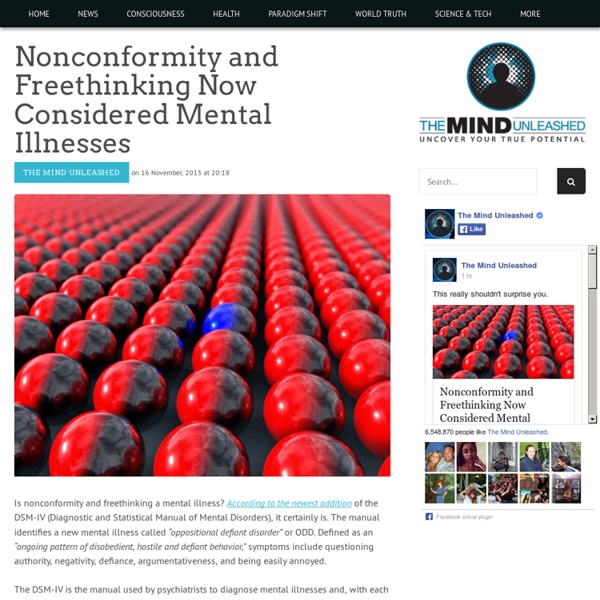 Is nonconformity and freethinking a mental illness? According to the newest addition of the DSM-IV (Diagnostic and Statistical Manual of Mental Disorders), it certainly is. The manual identifies a new mental illness called “oppositional defiant disorder” or ODD. Defined as an “ongoing pattern of disobedient, hostile and defiant behavior,” symptoms include questioning authority, negativity, defiance, argumentativeness, and being easily annoyed. The DSM-IV is the manual used by psychiatrists to diagnose mental illnesses and, with each new edition, there are scores of new mental illnesses. Are we becoming sicker? New mental illnesses identified by the DSM-IV include arrogance, narcissism, above-average creativity, cynicism, and antisocial behavior. All of this is a symptom of our over-diagnosing and overmedicating culture. According to the DSM-IV, the diagnosis guidelines for identifying oppositional defiant disorder are for children, but adults can just as easily suffer from the disease.

There's a Word for That: 25 Expressions You Should Have in Your Vocabulary Recently I came across this amazing little Tumblr named ‘OtherWordly‘ – itself a play on words. It consists of a collection of strange and lovely words from different languages through different times. What I like most about this selection of consonants and vowels – little meaning-carrying packages of vibration – is that they all try to point to the unspeakable, the transient or the neglected. That which we forget in the busyness of our daily grind. Words have the power to remind us – and therefore we should choose our words carefully so we are reminded of the things that nourish our souls.

Reinvent Yourself Last year, Silberberg led 12 trips and survived solely on the proceeds from his Fitpacking business. "I make a quarter of what I used to, but I have an extremely high quality of life," he says. "Yesterday I went skiing, and in two days I'll guide a group through Big Bend National Park."

Scientism Scientism is belief in the universal applicability of the scientific method and approach, and the view that empirical science constitutes the most authoritative worldview or most valuable part of human learning to the exclusion of other viewpoints.[1] It has been defined as "the view that the characteristic inductive methods of the natural sciences are the only source of genuine factual knowledge and, in particular, that they alone can yield true knowledge about man and society. Scientism may refer to science applied "in excess". Understanding Mind, Society and Behavior Live Blog Understanding Mind, Behavior, and Society Date: Thursday, December 4, 2014Time: 10:30 a.m. - 12:00 p.m. ET (15:30 - 17:00 GMT or convert time)Location: World Bank HQ (JB1-080) & Online The underlying assumption for many economic policies is that human behavior arises from “rational “choice, with individuals carefully weighing their choices, considering all readily available information, and making decisions on their own. In recent decades, however, novel policies based on a more accurate understanding of how people actually think and behave have shown great promise in addressing some of the most difficult development challenges, such as increasing productivity, breaking the cycle of poverty from one generation to the next, and acting on climate change. Follow the event via hashtag #WDRmind

IMAGINE YOURSELF: Manage your thoughts and manifest your desires Deep down, most of us have desires, needs, or goals. There are things we wish were different. Some of us want to have a different weight or body shape. Some people hope for a new career, more money, or a new relationship. Some people want relief from an enduring illness. Lucid dreams and metacognition: Awareness of thinking; awareness of dreaming To control one's dreams and to live 'out there' what is impossible in real life -- a truly tempting idea. Some persons -- so-called lucid dreamers -- can do this. Researchers from the Max Planck Institute for Human Development in Berlin and the Max Planck Institute of Psychiatry in Munich have discovered that the brain area which enables self-reflection is larger in lucid dreamers. Thus, lucid dreamers are possibly also more self-reflecting when being awake.

Self-actualization Self-actualization is a term that has been used in various psychology theories, often in slightly different ways. The term was originally introduced by the organismic theorist Kurt Goldstein for the motive to realize one's full potential. Expressing one's creativity, quest for spiritual enlightenment, pursuit of knowledge, and the desire to give to society are examples of self-actualization. In Goldstein's view, it is the organism's master motive, the only real motive: "the tendency to actualize itself as fully as possible is the basic drive... the drive of self-actualization

Why Do Many Reasonable People Doubt Science? There’s a scene in Stanley Kubrick’s comic masterpiece Dr. Strangelove in which Jack D. Ripper, an American general who’s gone rogue and ordered a nuclear attack on the Soviet Union, unspools his paranoid worldview—and the explanation for why he drinks “only distilled water, or rainwater, and only pure grain alcohol”—to Lionel Mandrake, a dizzy-with-anxiety group captain in the Royal Air Force. 8 Reasons Young Americans Don't Fight Back: How the US Crushed Youth Resistance Traditionally, young people have energized democratic movements. So it is a major coup for the ruling elite to have created societal institutions that have subdued young Americans and broken their spirit of resistance to domination. Young Americans—even more so than older Americans—appear to have acquiesced to the idea that the corporatocracy can completely screw them and that they are helpless to do anything about it.

Word association: Study matches brain scans with complex thought In an effort to understand what happens in the brain when a person reads or considers such abstract ideas as love or justice, Princeton researchers have for the first time matched images of brain activity with categories of words related to the concepts a person is thinking about. The results could lead to a better understanding of how people consider meaning and context when reading or thinking. The researchers report in the journal Frontiers in Human Neuroscience that they used functional magnetic resonance imaging (fMRI) to identify areas of the brain activated when study participants thought about physical objects such as a carrot, a horse or a house. The researchers then generated a list of topics related to those objects and used the fMRI images to determine the brain activity that words within each topic shared.

Teaching Critical Thinking Whether or not you can teach something as subjective as critical thinking has been up for debate, but a fascinating new study shows that it’s actually quite possible. Experiments performed by Stanford's Department of Physics and Graduate School of Education demonstrate that students can be instructed to think more critically. It’s difficult to overstate the importance of critical-thinking skills in modern society. The ability to decipher information and interpret it, offering creative solutions, is in direct relation to our intellect.

How to Increase Blood Flow to the Brain: 8 Steps Edit Article Edited by Devan Braden, Teresa, Maniac, Permasofty and 6 others Blood flow is the single most important thing for your brain. Magical thinking Magical thinking is the attribution of causal relationships between actions and events which cannot be justified by reason and observation. In religion, folk religion, and superstitious beliefs, the correlation posited is often between religious ritual, prayer, sacrifice, or the observance of a taboo, and an expected benefit or recompense. In clinical psychology, magical thinking can cause a patient to experience fear of performing certain acts or having certain thoughts because of an assumed correlation between doing so and threatening calamities. Magical thinking may lead people to believe that their thoughts by themselves can bring about effects in the world or that thinking something corresponds with doing it.[1] It is a type of causal reasoning or causal fallacy that looks for meaningful relationships of grouped phenomena (coincidence) between acts and events. Associative thinking[edit] Other forms[edit]

Mass psychosis in the US Has America become a nation of psychotics? You would certainly think so, based on the explosion in the use of antipsychotic medications. In 2008, with over $14 billion in sales, antipsychotics became the single top-selling therapeutic class of prescription drugs in the United States, surpassing drugs used to treat high cholesterol and acid reflux. Once upon a time, antipsychotics were reserved for a relatively small number of patients with hard-core psychiatric diagnoses - primarily schizophrenia and bipolar disorder - to treat such symptoms as delusions, hallucinations, or formal thought disorder.