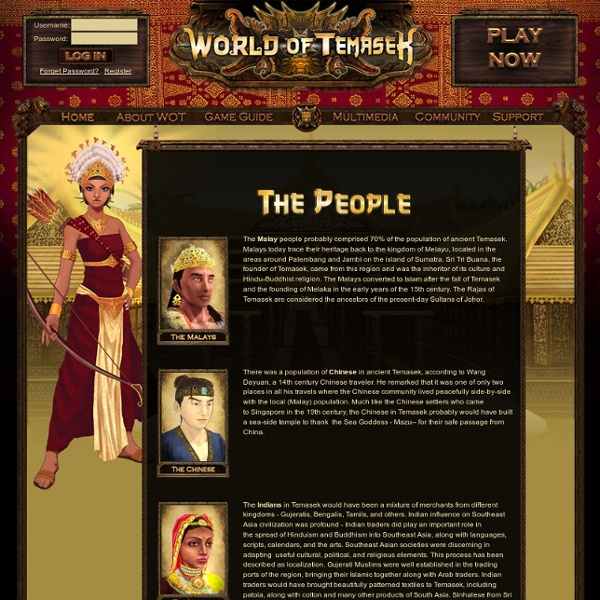 description of different people and religions in Singapore before 1819 This tells me that there were many people from religious Why i chose this source What occupations in the 14th century The vast majority of people would have been peasants/serfs so they would have got very little pay, and as such had very little disposable income. In towns you would have got some free-men who were able to work for their own money. There wasn't that much difference in the jobs people did since pre-roman times right until the beginnings of the agricultural revolution. To help support people/industries there would have been potteries, and foundries (purify/process ores to make metals. the metal for swords and horseshoes came from somewhere!). Stone would also have been extracted by quarry men. Most jobs were highly specialised, and covered a tiny part of what there modern equivalents are. The exceptions would have been the growing of food (most people would have had a strip of land for growing the majority of their food, with little surplus), and blacksmiths or farriers(a blacksmith who concentrates on "stuff" for horses) Carters or porters would have been the lorry drivers of the time.

The description of the religion places in the cities before 1819 Early history of Singapore The early history of Singapore refers to the history of Singapore before 1819, when the British established a trading settlement on the island and set in motion the history of 'modern Singapore'. Prior to 1819, Singapore was known by several names in written records dating back as early as the 2nd century, which identified the island as a trade port of some importance. The island was controlled by different kingdoms in Southeast Asia including the Siamese, Javanese, and Sultanate of Malacca from the 14th century and the Sultanate of Johor from the 16th century. 2nd century[edit] The first written records of Singapore date to the 2nd century, when the island was identified as a trading post in several cartographic references. A 3rd century Chinese written record described the island of Pu Luo Zhong (蒲羅中), probably a transliteration of the Malay Pulau Ujong, "island at the end" (of the Malay peninsula).[2] Indian culture[edit] Middle Ages[edit] European contact[edit] Notes[edit]

why i choose this source and where this source is from Why i chose this source? Indians in Singapore Indians in Singapore—defined as persons of South Asian paternal ancestry—form 9% of the country's citizens and permanent residents, making them Singapore's third largest ethnic group after Chinese and Malays. Among cities, Singapore has one of the largest overseas Indian populations. Singapore’s Indian population is notable for its class stratification, with large elite and lower income groups. This has grown more visible since the 1990s with an influx of both well-educated and unskilled migrants from India, which has created new contradictions. Singapore Indians are linguistically and religiously diverse, with ethnic Tamils and nominal Hindus forming majorities. Indian culture has endured and evolved over almost 200 years. Prominent Indian individuals have long made a mark in Singapore as leaders of various fields in national life. Definitions[edit] Indians 'in Singapore' may be further defined in terms of nationality and residency status. History[edit] Pre-colonial period[edit]