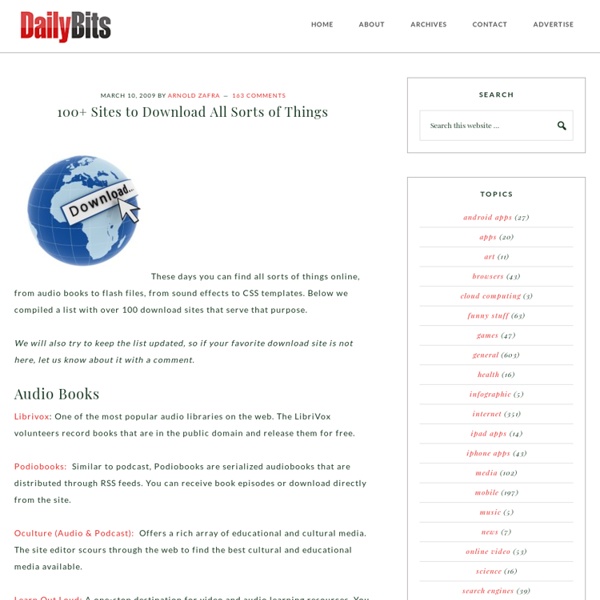 These days you can find all sorts of things online, from audio books to flash files, from sound effects to CSS templates. Below we compiled a list with over 100 download sites that serve that purpose. We will also try to keep the list updated, so if your favorite download site is not here, let us know about it with a comment. Audio Books Librivox: One of the most popular audio libraries on the web. The LibriVox volunteers record books that are in the public domain and release them for free. Podiobooks: Similar to podcast, Podiobooks are serialized audiobooks that are distributed through RSS feeds. Oculture (Audio & Podcast): Offers a rich array of educational and cultural media. Learn Out Loud: A one-stop destination for video and audio learning resources. BitTorrent The Pirate Bay: The web’s largest collection of bit torrent trackers. Torrent Portal : This P2P and file sharing site works like Google by linking only to .torrent metafiles and captures the caches of those files. eBooks Clipart

Nietzsche: Beyond Good and Evil A brilliant young man, he was appointed professor at the University of Basel aged 24 having not even finished his degree. His evanescent philosophical life ended 20 years later when he went insane and died shortly afterwards. Nietzsche's argued that the Christian system of faith and worship was not only incorrect, but harmful to society because it allowed the weak to rule the strong - it suppressed the will to power which was the driving force of human character. The 37 Best Websites To Learn Something New Forget overpriced schools, long days in a crowded classroom, and pitifully poor results. These websites and apps cover myriads of science, art, and technology topics. They will teach you practically anything, from making hummus to building apps in node.js, most of them for free. There is absolutely no excuse for you not to master a new skill, expand your knowledge, or eventually boost your career.

Intense PC - World's First Ivybridge Core i7 Fanless Mini Computer Back in March we announced the Intense PC, the latest addition to our Fit-PC family and our most powerful fanless computer to date using 2nd Generation i3 and i7 cores. Well now, only a few days after Intel itself announced availability of its 3rd Generation Core i7 IVYBRIDGE processors, we can confirm that Intense PC is the world’s first, low power, miniature, fanless computer to ship with an i7 Ivybridge option! Orders are being taken immediately. Already a powerful performer, the Intense PC has now been treated to a third generation Intel Core i7-3517UE processor running at 1.7 GHz. Based on Intel's Ivy Bridge 22-nm architecture, and featuring integrated Intel HD 4000 graphics, the dual-core processor can be ramped up to 2.8 GHz with Turbo Boost technology to meet the high workload demands of today's industrial PC users.

Open data, democracy and public sector reform A look at open government data use from data.gov.uk (Based on an MSc Dissertation by Tim Davies, July 2010) This is an online report based on an MSc Dissertation at the Oxford Internet Institute by Tim Davies submitted to the University of Oxford, July 2010. It is shared using the Digress.it platform which allows for paragraph level commenting and hyperlinking to elements of the document. A downloadable PDF copy of the report is available here. Writing the Dreaded Cover Letter I've written other posts about writing challenges connected to the job search: how writing anxiety can affect the job search and how writing samples add another layer of challenge to the job seeker. But of all the writing-related activities of the job search, the one task most universally hated is the cover letter. It seems to cause anxiety for many otherwise well-qualified job seekers.

The Most Useful Fifty Web Sites You Don't Know About There are millions and millions of Web sites out there, and there are certain sites that we probably visit every single day. However, there are so many amazingly useful sites that exist to save time, save money, help us search more effectively, drill down into reference materials, and so much more. In this article, we're going to take a look at a list of incredibly useful sites that's you'll want to check out yourself. Search and Reference