The Water Cycle for Schools and Students 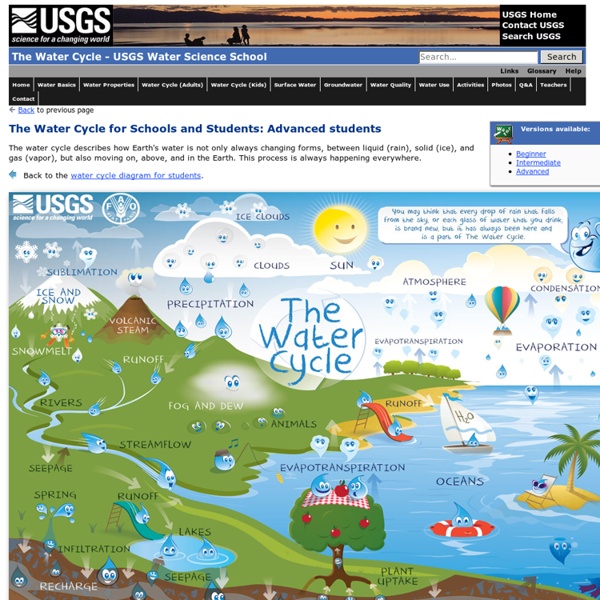 The water cycle describes how Earth's water is not only always changing forms, between liquid (rain), solid (ice), and gas (vapor), but also moving on, above, and in the Earth. This process is always happening everywhere. Back to the water cycle diagram for students. Animals In the grand scheme of the water cycle, animals may not play a very big role, but all animals, including you, participate in moving water around as part of the water cycle. The water cycle is critical to all animals and life on Earth. There is one creature on Earth that does have a very large impact on the water cycle—human beings. Atmosphere The atmosphere truly is the superhighway in the sky that moves water everywhere over the Earth. The next time you go outside you will be standing in the Earth's atmosphere. The air outside may look invisible, but it is full of molecules, including water molecules, as water vapor. How much does a cloud weigh? Clouds are made of water, and water has weight, so how can they float? Lakes

Digital tools for researchers Find out how digital tools can help you: Explore the literature(back to top) Here is a collection of digital tools that are designed to help researchers explore the millions of research articles available to this date. Search engines and curators help you to quickly find the articles you are interested in and stay up to date with the literature. Article visualization tools enhance your reading experience, for instance, by helping you navigate from a paper to another. Search engines and curators Human Appropriation of the World's Fresh Water Supply "Water, water, everywhere, nor any drop to drink"- Rhyme of the Ancient Mariner, by Coleridge. Jump to: [The Water Resources of Earth] [Consumptive and Non-Consumptive Water Use] [Human Appropriation of Renewable Fresh Water ] [What are the Solutions?] [Water Sustainability, Water Security][References] The Water Resources of Earth Over 70% of our Earth's surface is covered by water ( we should really call our planet "Ocean" instead of "Earth"). Although water is seemingly abundant, the real issue is the amount of fresh water available.

Volcano and earthquake activity in Iceland Renewed earthquake activity in Hekla volcano Today (14-April-2014) an earthquake swarm took place in south part of Hekla volcano. The earthquake swarm took place close to Vatnafjöll mountains. This area is made up of crater rows from earlier eruptions. Walker Surname, Family Crest & Coats of Arms Origins Available: English, German, Jewish, ScottishThe origins of the Walker surname lie with the Anglo-Saxon tribes of Britain. The name Walker began when someone in that family worked as a fuller, whose job it was to scour and thicken raw cloth by beating it and trampling it in water. The surname Walker is derived from the Old English word wealcere, which means fuller. "In the North of England, fullers' earth is called 'walker's clay,' and a fulling-mill a 'walk-mill.'

Stephen Leahy, International Environmental Journalist One night in a bar a Russian journalist who I’d just met says: “This global warming is too complicated for people to know if it’s real or not”. “You don’t think climate change is happening?” I asked with surprise since we were both covering a big United Nations climate conference. “No one has been able to give me a good explanation to prove it’s real,” said Yuri (not his real name). “I can explain it to you in less than one minute,” I replied. Yuri was sceptical but I went ahead and said: The Urgency of Water Security - THE CHALLENGE Feeding the world Feeding the world has been a top priority for decades. The task is not getting easier. It is estimated that over the next 40 years the world will need to double its food production to meet growing populations – set to increase by around 50% over the next 50 years. As is well known, agriculture already uses more water – a finite resource – than any other human activity.

Culture Victoria Antoine Fauchery and Richard Daintree produced iconic images of both early gold diggers and the landscapes scarred by the exploding search for gold, which attracted miners from all over the world and created the boom that made Melbourne the fastest growing metropolis of the time. Antoine Fauchery and Richard Daintree were both migrants who tried their luck on the goldfields – Daintree coming out from England in 1853, Fauchery from France in 1852. Unsuccessful on the goldfields, in 1857 they combined forces to produce a series of photographs titled Sun Pictures of Victoria, capturing important early images of the goldfields, Melbourne Streets, landscapes and portraits of Indigenous Victorians. Using the new collodian wet-plate process, they created albumen silver prints of a rare quality for the time.

The Medieval History of the Christmas Cookie - Hungry History It’s the most wonderful time of the year, when cooks around the country take to their kitchens to bake cookies galore. Whether you prefer gingerbread men, crisp springerle or crunchy biscotti, chances are you’ll enjoy some fresh baked Christmas cookies this holiday season. Like many Christmas traditions, the origin of this delicious custom lies ages ago, in solstice rituals conducted long before Christmas became the huge commercial holiday it is today. Winter solstice festivals have been held for eons, across the world. From Norway to West Africa, Ireland to India, groups of people gathered to celebrate the changing of the seasons.

How to write a peer review to improve scholarship: Do unto others as you would wish them do unto you. In academia, peer review functions as a quality-assurance mechanism which also aims to improve the scientific process as a whole. But few reviewers are provided with any training or mentoring on how to undertake a review. Hugh McLaughlin offers clarification on the process and the objective of peer review feedback and stresses the need for specific critical analysis for authors, which should be done in a supportive manner. The three quotes above were published in Buzzfeed (“25 Brutally Honest Peer Review Comments From Scientists“) and were ostensibly culled from actual peer reviews.

What is Water Security? - THE CHALLENGE A water secure world harnesses water's productive power and minimises its destructive force. It is a world where every person has enough safe, affordable water to lead a clean, healthy and productive life. It is a world where communities are protected from floods, droughts, landslides, erosion and water-borne diseases. Water security also means addressing environmental protection and the negative effects of poor management. Build Your Team Of B2B Marketing Rockstars For 2015 While B2B Marketers love a challenge, over half of all marketers report of having responsibilities in 7 out of 10 other areas of marketing. We’re a busy bunch and we know that (although we do try) we can’t wear every hat in the marketing box. If you’re planning to smash those 2015 targets and deliver that all-important ROI, you’ll need a successful team of Marketing Rockstars to drive the performance of your marketing campaigns. So who are the core team players you need in order to build a team of #B2BRockstars and hit your strategic goals in 2015? We investigated some key team attributes presented in the IDM B2B Barometer report. The Data Analyst

Recipes for Authentic German Cakes and Desserts - Germanfoods.org Following is a collection of recipes for authentic German cookies, cakes and other desserts baked according to centuries-old traditions. German Christmas specialties, in particular, are well-known and popular worldwide. Many have a rich and colorful history, and are crafted into complex patterns and shapes often associated with ancient symbolic meanings. The following recipes reflect these authentic traditions, even when adapted for the modern kitchen. Enjoy! Alexander Torte An East German cake with Latvian roots with raspberry jam sandwiched by shortcake garnished with a sugary lemon glaze.

Why Mumbai gets flooded while Netherlands doesn't? Netherlands has only 50% of its land that is higher than 1 m from the sea. 26% of its area and 21% of its population are below sea level. Still it doesn’t get flooded. Its life doesn’t get paralysed for days, three four times every year. In fact, it is one of the richest countries in the world, is second largest exporter of food after the USA, and has more FDI into it than whole of the African continent put together. Water Resources Management - THE CHALLENGE Water is an essential natural resource that shapes regional landscapes and is vital for ecosystem functioning and human well-being. At the same time, water is a resource under considerable pressure. Alterations in the hydrologic regime due to global climatic, demographic and economic changes have serious consequences for people and the environment. A water cycle under stress