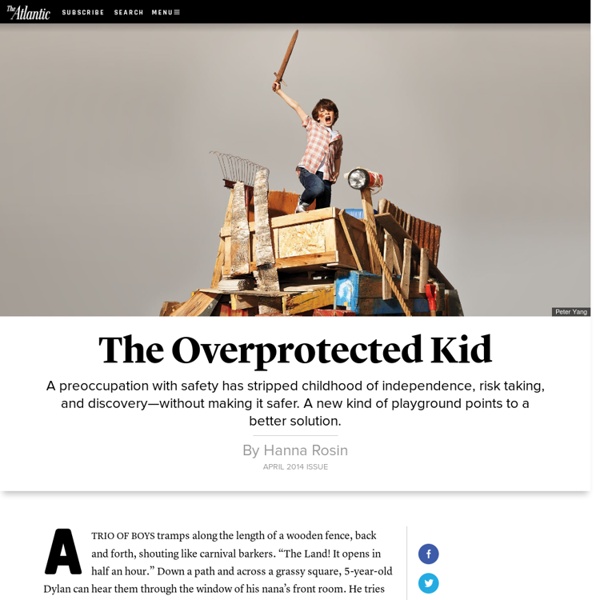 A trio of boys tramps along the length of a wooden fence, back and forth, shouting like carnival barkers. “The Land! It opens in half an hour.” Down a path and across a grassy square, 5-year-old Dylan can hear them through the window of his nana’s front room. He tries to figure out what half an hour is and whether he can wait that long. When the heavy gate finally swings open, Dylan, the boys, and about a dozen other children race directly to their favorite spots, although it’s hard to see how they navigate so expertly amid the chaos. It’s still morning, but someone has already started a fire in the tin drum in the corner, perhaps because it’s late fall and wet-cold, or more likely because the kids here love to start fires. The Land is an “adventure playground,” although that term is maybe a little too reminiscent of theme parks to capture the vibe. The playgrounds were novel, but they were in tune with the cultural expectations of London in the aftermath of World War II.

Can a Playground Be Too Safe? “I grew up on the monkey bars in Fort Tryon Park, and I never forgot how good it felt to get to the top of them,” Mr. Stern said. “I didn’t want to see that playground bowdlerized. I said that as long as I was parks commissioner, those monkey bars were going to stay.” His philosophy seemed reactionary at the time, but today it’s shared by some researchers who question the value of safety-first playgrounds. Even if children do suffer fewer physical injuries — and the evidence for that is debatable — the critics say that these playgrounds may stunt emotional development, leaving children with anxieties and fears that are ultimately worse than a .

10 Reasons Why Handheld Devices Should Be Banned for Children Under the Age of 12  The American Academy of Pediatrics and the Canadian Society of Pediatrics state infants aged 0-2 years should not have any exposure to technology, 3-5 years be restricted to one hour per day, and 6-18 years restricted to 2 hours per day (AAP 2001/13, CPS 2010). Children and youth use 4-5 times the recommended amount of technology, with serious and often life threatening consequences (Kaiser Foundation 2010, Active Healthy Kids Canada 2012). Handheld devices (cell phones, tablets, electronic games) have dramatically increased the accessibility and usage of technology, especially by very young children (Common Sense Media, 2013). As a pediatric occupational therapist, I’m calling on parents, teachers and governments to ban the use of all handheld devices for children under the age of 12 years. Following are 10 research-based reasons for this ban. Please visit zonein.ca to view the Zone’in Fact Sheet for referenced research.

When Students Get Creative With Tech Tools, Teachers Focus on Skills Brad Flickinger/Flickr By Jennifer Carey One of the most intimidating aspects of infusing technology into curriculum is that educators often believe that they will have to master and then teach their students to use new technology tools before assigning a project. These concerns are understandable as our time for professional development is finite and school curricula are already packed. The Over-Protective Designer In the Smithsonian article "Kids Don't Need Equipment, They Need Opportunity," Roger Hart, an environmental psychologist, remarks that “Most people who care about child development know nothing about design, and most people who design know nothing about child development." Writing for the University of Texas, Kay Randall, the author of an article entitled Child's Play, notes the historical and continued difficulty of creating consensus between designers, safety specialists and child development experts. These articles really challenged us. How can we as designers create places to best enhance children's development through play? Are we as designers contributing to uninteresting, un-challenging playground design if we acquiesce to societal forces with zero risk-tolerance? How can we tap in to our desire to create memorable, engaging playgrounds - places which are much more than just collections of purchased plastic?

10 Common Mistakes Parents Today Make (Me Included)  When I became a mom, I got lots of advice on how to love my child. But not until a few years ago did someone actually point out that loving a child means wanting what's best for them long-term. When my four daughters were young, long-term didn't resonate with me. Back then it was about survival, meeting daily needs and keeping my head above water. Now that my kids are maturing, however, the fog is lifting. I'm no longer a pledge of parenting, but rather an indoctrinated member. Mapping Twitter Topic Networks: From Polarized Crowds to Community Clusters Polarized Crowds: Political conversations on Twitter Conversations on Twitter create networks with identifiable contours as people reply to and mention one another in their tweets. These conversational structures differ, depending on the subject and the people driving the conversation.

Children’s Play Space and Safety Management: SAGE Open Abstract The provision of stimulating and engaging play space for children and young people is increasingly recognized as an important societal goal, not the least because it provides the young with opportunities to develop and gain experience in experimenting with risk. Research in several disciplines now suggests that achievement of this goal has however been impeded in recent decades, and reasons commonly cited have included fear of injury and avoidance of litigation. International standards on play equipment have also been promulgated and justified in terms of securing young people’s “safety,” most usually narrowly defined as injury reduction.

Spanking is abuse. There. I said it. I was not spanked growing up. Did I push the limits when I was a child? Yes. Do the children who are spanked push the limits? Yes.